In a blatant attempt to refute its stodgy, corporate image, GM produced the SSR in 2002--a retro-styled roadster pickup with a retractable hardtop. For those who remember the concept SSR (2000 Detroit auto show), it didn't change much when it went into production. But there were problems, not the least of which were the drop top that let all sorts of wind and road noise into the cab and the modified GMT 360 platform (used by the Chevy Trailblazer and GMC Envoy, among others), which had a lot of shake. Hit a pothole at speed (almost any speed) and the wheels would wobble and flail. That's not a good trait for the vehicle GM calls its "Corvette truck," especially when it's designed specifically as a halo vehicle to lure people into showrooms and cause would-be buyers to think kindly of other GM products.
More recently, and to GM's credit, the company has decided to take advantage of a midmodel upgrade to do more than just throw power at the problems. Not that we mind the additions of the sultry Gen IV LS2 6.0-liter V-8 with just under 400 horsepower and the T-56 six-speed, but the most significant improvements to the current SSR come from changes made to chassis stiffness, shock/spring tuning, engine-mount strengthening, and bushing reevaluations. Bottom line: Much of the previous body shake is gone, and the ride is much less punishing. The added frame stiffening comes from an extra crossbar under the middle section of the frame and a reinforced X-brace that holds the front of the frame rails tight, directly underneath the engine. The resulting increase in frame rigidity allowed for more precise spring and shock tuning. 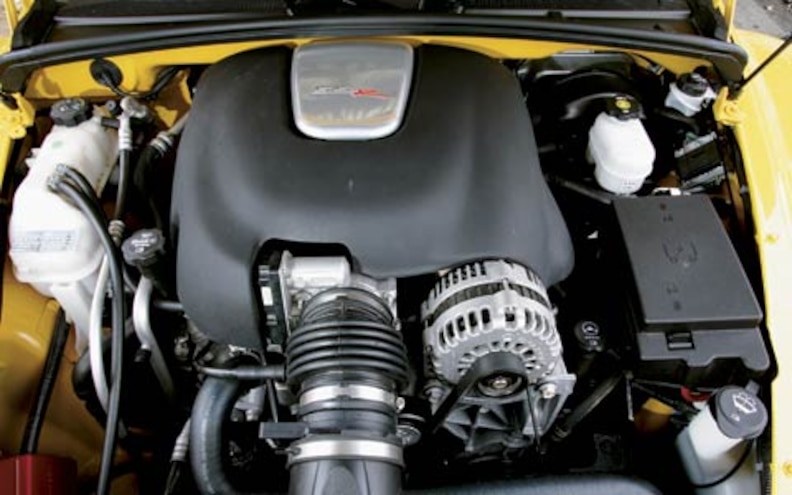 View Photo Gallery | 5 Photos
Photo 2/5   |   2005 Chevrolet Ssr top Engine View
Another important upgrade is in the form of transmission choices. In addition to the standard four-speed automatic (now a stronger 4L65E), those opting for the T-56 manual transmission ($815) will also get a stronger GM Corporate 14-bolt (9.5-inch ring gear) rear axle with an Eaton locking differential, not available with traction control. Automatic SSRs get a smaller 12-bolt rear axle (8.6-inch ring gear) and standard electronic traction control, with an off-switch in the center armrest. Minor tweaks include new, self-supporting hood struts that replace the flimsy single prop rod as well as the ability to access the seat-adjustment switches with the doors closed.
Previous SSRs didn't allow for any space between the door and seat--not even for girlie-handed drivers. Also, although the steering gear remains the same, new bearings and seals give the wheel better low-speed feel and make it quieter. And, speaking of noise levels, considerable work has been done to improve the retractable hardtop seals, specifically at the bend and fold points of the foldable hardtop, which are right behind the driver and passenger's heads. Previous concessions to significant wind noise (and the occasional water leak) are eliminated, making conversations and radio listening possible at highway speeds (it wasn't before). 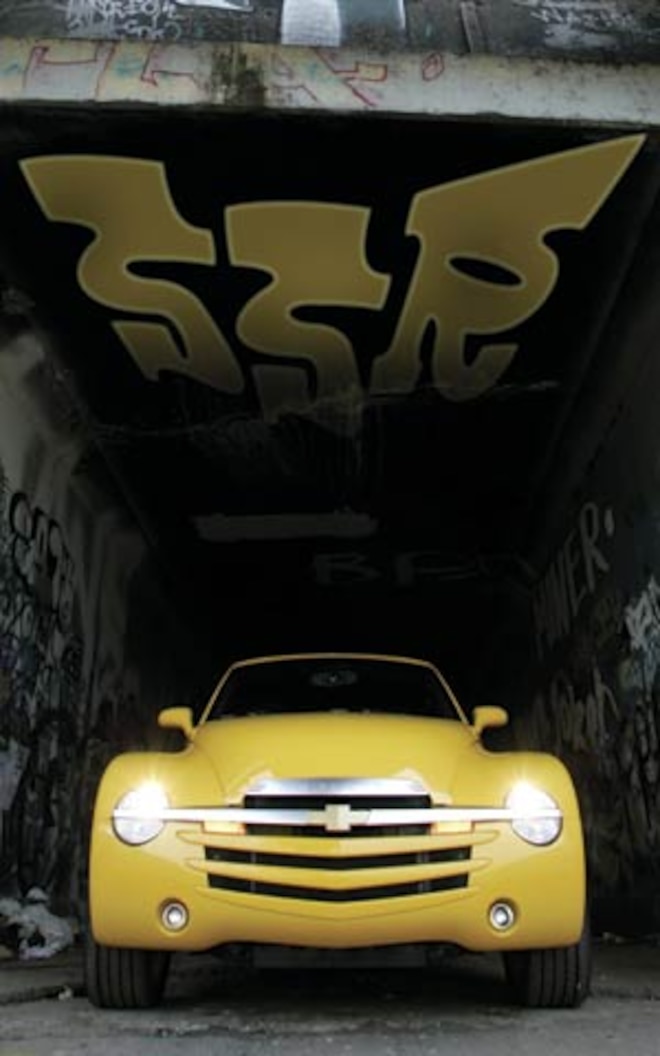 View Photo Gallery | 5 Photos
Photo 3/5   |   2005 Chevrolet Ssr front View
Even with the huge number of improvements to this SSR, GM showed unusual restraint by up-pricing base models $945. Of course, when you have a low-volume two-door sport truck with an undersized bed (oversized trunk?), 2500 pounds of towing capacity, and no place for a gun rack, $45K may seem a lot to pay. Oddly, though, there may be a good value here, as misplaced as it might be. For some (and we can't imagine more than 800 of them a month), opting for a unique boulevard roadster pickup with a retractable hardtop, now with 90 more horses, vastly improved ride and handling, and a chance to row through the gears just like the C6 Corvette, the new SSR may not be a bad choice.

View Photo Gallery | 5 Photos
Photo 4/5   |   Rick Wagoner, Chairman and CEO (and now North American Product Czar) of GM, standing next to the first Chevy SSR concept from 2000, made a big push to ensure this retro-rod reached production. Gen I had its problems, but the current Gen II version (especially with the six-speed manual) will make a bigger splash with enthusiasts.
GM expects the model split between manual and automatics to duplicate the Corvette numbers, with 65 percent opting for the automatic. Clearly, not many truck guys will want a "Corvette truck," but for the ones who do, this is the best one yet.