Is this the ultimate 4x4 challenger? 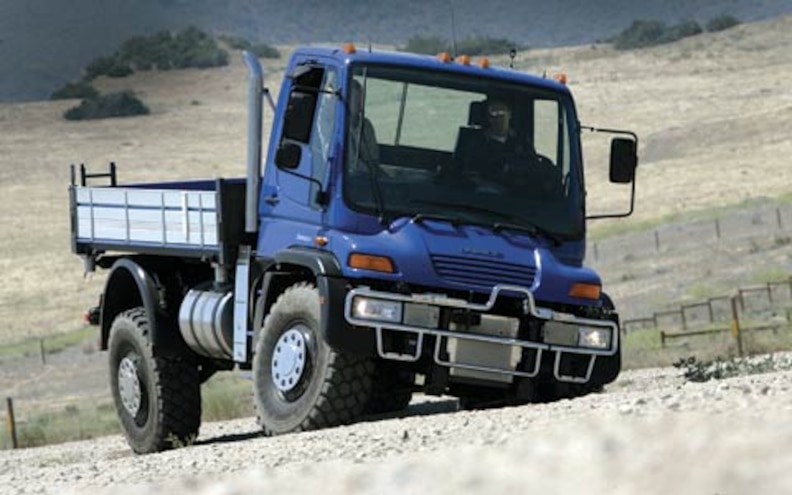 If there's one thing we've learned, when you get the chance to drive a Tonka Toy, do it--and that's exactly what we did when the people at Unimog offered us a drive opportunity in a 2005 U500. Looking more like a behemoth reptilian insect with its flat face, tallish posture, and almost unbelievable strength and capability, the Unimog is the ultimate in heavy-duty gearing with command seating positions. Equipped with what essentially amounts to 40-inch tires and two 4x4 low-range ratios (one designated "working" gears; the other "crawler" gears), the Unimog can creep at 0.09 mph with a crawl ratio of over 3000:1. That means a crawling speed of 150 yards an hour--not idling; that's at a 2000 rpm engine speed (close to wide-open throttle for a diesel). But the Unimog's tremendous crawling abilities are only part of what makes this vehicle such a standout player on the road. Mixing both old-world and high-tech solutions in a single vehicle, the
Unimog has a long military history behind it, but is now used throughout the world for road maintenance, snowblowing, street sweeping, construction, and firefighting, and a few are even used as daily drivers. But at over $100,000 (before you add any of the thousands of options), it's no wonder Unimog only sells about 300 of the units per year to various municipalities and construction companies around the world, and fewer than 50 per year in the U.S. 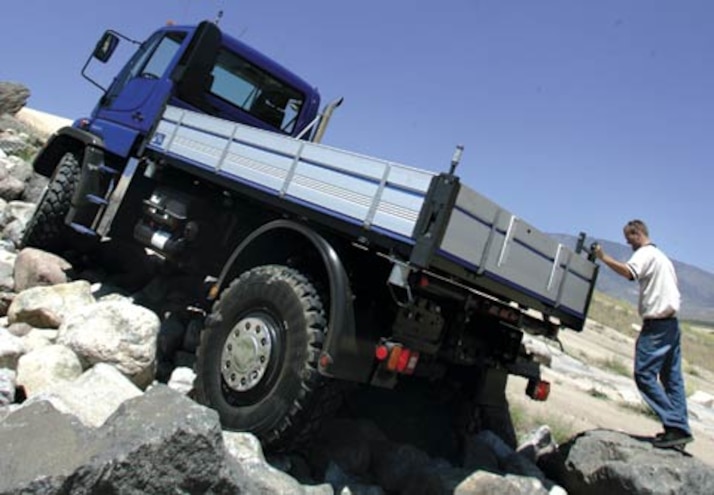 View Photo Gallery | 6 Photos
Photo 2/6   |   2005 Unimog U500ls rear Side View
The truck begins with a heavy-duty turbocharged, intercooled Mercedes-Benz 6.4-liter I-6 that puts out 700 pound-feet of torque, all of which sits directly underneath the three-seat cab. Without a hood to block the view, visibility is amazing, allowing for an easy line of sight in front of each tire. The heavy-duty transmission offers eight forward gears and six reverse, and uses a unique electronic-manual clutch that acts as a type of switch, allowing for quick gearshifts, as well as the ability to feather the clutch like a conventional spring-loaded unit. The act of selecting gears is done with a toggle switch on the gearshift lever, allowing up- or downshifts with a simple touch (even multiple gears), with all the readout information on the dash. If you do something it doesn't like (like going from first to fifth), a loud clicking sound lets you know you have to try again.
The U500's four-wheel drive is a permanent, full-time all-wheel-drive system with two separate gears for low range. Suffice it to say that the gear multiplication is spectacular and makes the crawling capability of this truck one of the best in the world. With working and crawler gears (the former identified with a donkey icon; the latter with a rabbit--we're not sure why), the amount of available torque to crawl over rocks and boulders is stunning, as we found out at a local off-highway vehicle park where we navigated a test course reserved for highly modified 4x4 buggies and custom trucks. Front and rear live axles have geared hubs (like the Hummer H1), and a central tire inflation system is available as an option, allowing the driver to both raise and lower tire pressures from the cab, with all psi information for each tire indicated on a dash display. We found the combination of big torque, big weight, and a huge footprint almost unstoppable when trying ridiculously steep hillclimbs. The only thing that prevented us from conquering the steepest motorcycle hill around was a large patch of soft dust that broke our traction from the front wheels and had us sliding toward a deep rut.

View Photo Gallery | 6 Photos
Photo 3/6   |   Although it looks like the front left tire has broken off the axle, it's actually dropped into a three-foot trench. The live-axle/coil-springs suspension setup makes the Unimog an excellent payload hauler and extreme-terrain navigator.
Inside, the Unimog is probably like nothing you've ever driven. The command seating position of the cab-forward setup allows the driver to precisely control where to place his tires or any of the truck's multiple attachments (there are quite a few companies that make lifts, blowers, cutters, beds, cranes, and more). The steering-column-mounted dash houses all important electronic gauges, while the center console is the command center for all of the hydraulic switches, one of which is a multifunctional joystick that can control the tilt-bed option or several other attachments. The switches and information are easily identifiable, with the transmission lever and paddle shifter falling most comfortably under the right hand, and gearing, lighting, and accessory toggles filling out a separate keypad. (And the entire steering column and pedals can be slid from one side of the cab to other for right- or left-hand-drive configurations.)
In addition, our test unit had some personalizing interior mods to set it apart from its workhorse family members (wood and carbon-fiber trim, DVD player, mood lighting). If so inclined, Unimog will set a buyer up with a stereo and interior upgrade outfitter, giving the ceiling, dash, and doors accents to make the rig feel more livable.

View Photo Gallery | 6 Photos
Photo 4/6   |   2005 Unimog U500ls under View
Driving the Unimog, especially the long-wheelbase version, isn't as intimidating as one might think. In the context of a medium-duty truck, it's quite manageable. With the wheels directly underneath you, it offers impressive maneuverability, with little problematic body roll. Running up and down the gears with the electronic clutch takes some getting used to but would seem most useful when hauling or towing near-max load weights. It wouldn't surprise us to see some of this work-oriented technology in a version of a medium-duty Ram. Likewise, we're hugely impressed with how powerful the M-B 6.4-liter I-6 is, an engine that could provide a great way for Dodge to offer another option to the smaller Cummins 5.9-liter diesel.
The downside to all this is at $137,000 (our specific test unit) and with so few sales per year, it's not likely you'll see too many of these highly nimble work trucks cruising down the highway, and that's a shame. Regardless, it would be nice to see something smaller from Unimog for our Ultimate 4x4 Challenge next year. We can only hope.

View Photo Gallery | 6 Photos
Photo 5/6   |   2005 Unimog U500ls top Engine View
Another Old Favorite
This 1973 Pinzgauer 712m was made by Steyer Puch of Graz, Austria and, like the Unimog, has a rich European military background. The triple-axle military 712 is still used in many military units, but is becoming more popular in the States as a rugged trail rig. Its most unique feature is the absence of a frame chassis. Instead, it uses a heavy-duty tube where all vital driveline/shaft components are protected and enclosed. Most available Pinzgauers are from the Swiss Army, so they haven't seen much action; as a consequence, they're in very good shape. This particular specimen is used regularly for mountain camping trips and off-road-park play dates, as well as towing out buddies. The engine is a stock air-cooled four-banger (sounding very much like an old Beetle), while the six-wheel-drive system has three separate manual-locking differentials. The gearing for this vehicle follows in the footsteps of the (much) larger Unimog, albeit with a single low-range ratio, but is just as much fun to drive. For more information about parts and vehicles, go to www.swissarmyvehicle.com.