The days of harsh-riding, non-utilitarian hot-rod pickups are over. If you want a performance truck with functionality, this SS SUV is worth considering. The 395-horsepower TrailBlazer SS is a full 30 ponies shy of Jeep's Grand Cherokee SRT8, but stands as the most powerful of Chevy's new line of Super Sports, trumping the 303-horsepower V-8 Impala, both versions of the Silverado SS, V-6 Malibus, and supercharged and naturally aspirated Cobalts.
On bumpy roads, the TrailBlazer SS has the firm but rubbery suspension response you'd associate with a BMW. The rear-drive model is more fun at the track, with more potential for throttle-steer. The AWD prefers to overcook its tires, but both versions can oversteer controllably. Its suspension, lowered an inch from the standard TrailBlazer setup, helps. The TrailBlazer's LS2 falls five horses short of the Corvette/SSR/Pontiac GTO engine because it uses an engine-driven belt in place of those cars' electric fans (for towing reasons). The AWD version, with its Torsen center differential, has a 6600-pound tow rating, and the RWD model is capable of towing 6800 pounds. Nominal split for the AWD is 33 percent front/67 percent rear, with the front varying from 27 to 44 percent of power. 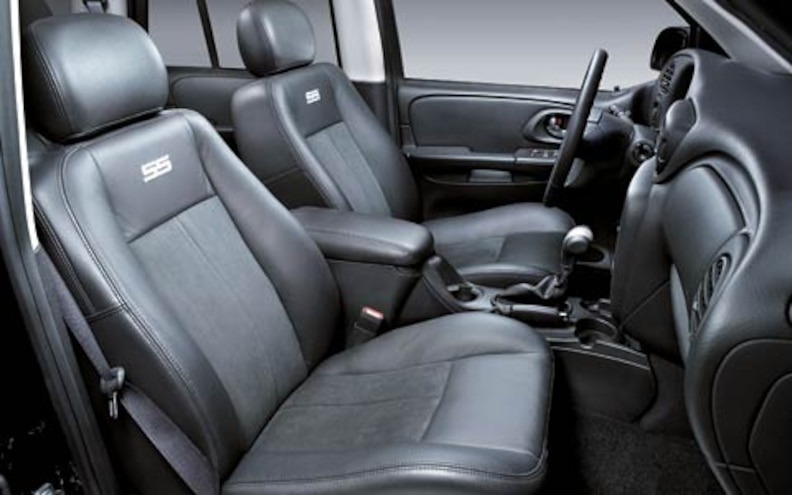 View Photo Gallery | 6 Photos
Photo 2/6   |   2006 Chevrolet TrailBlazer SS Interior View Front Cabin
Front and rear shocks and springs are beefed up with SS-specific valving for the Bilsteins. The front stabilizer bar is 2mm thicker, now at 36, and the 24mm rear bar remains the same thickness. Brakes are impressive, with improved cooling and Corvette Z51 pads up front and better temperature capacity for the rears. Steering uses a 16.0:1 low-friction rack, replacing the standard truck's 20.3:1 ratio. The steering is mostly quick and precise, though a bit vague on-center. Tires are robust Goodyear Eagle RS-A P255/50R20s on handsome six-spoke polished flangeless wheels. While the strengthened 4L70E four-speed automatic doesn't hamper performance in this truck, it'll subject you to some transmission lash, especially in the one-two upshift. 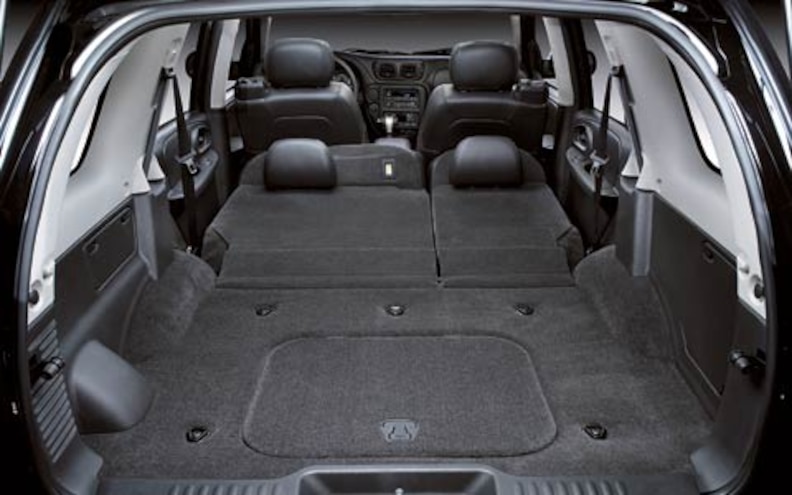 View Photo Gallery | 6 Photos
Photo 3/6   |   2006 Chevrolet TrailBlazer SS Interior View Trunk Space Seats Down
The SS package retails for $5195 on anything from base cloth-seat TrailBlazers to fully loaded ones, so you can pick the equipment level and whether to go with rear- or all-wheel drive. The latter adds about 150 pounds, and Chevy claims the performance difference is negligible. Our test numbers are for the rear-drive model, which feels significantly quicker on the road and at the track. Take the rear-drive unless you live in a Northern state, in which case you'll be perfectly happy driving a four-season SUV with all the utilitarian benefits of a truck and much of the fun of a sport sedan.
Only a head-to-head test will reveal whether the TrailBlazer SS is a match for the like-minded Grand Cherokee SRT8, which is based on a much newer sport/utility. For now, we can say the SS's performance, ride, and handling are good enough to make us forget about those harsh, knife-edge hot-rod pickups. A new era of performance truck has begun.