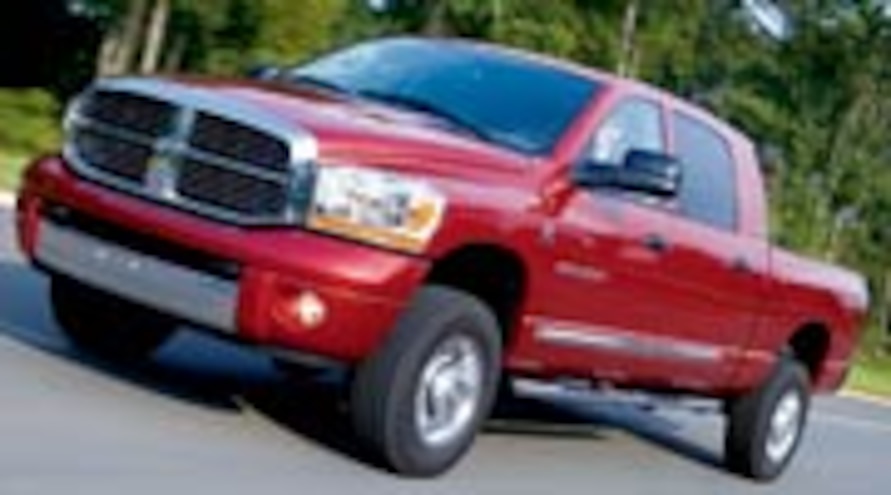 You only need look around to understand that "Bigger Is Better" has become the underlying theme for the times in which we live. From warehouse stores that sell toilet paper in pallet-size bundles to restaurants that serve plates of food big enough to stand on, American society seems to have taken the notion of "if a little is good, a lot must be better" to heart.
While the wisdom of this world view is open to debate, our recent experience behind the wheel of the brand-new 2006 Dodge Ram Mega Cab has us thinking that some good may come out of the super-sizing trend, after all. 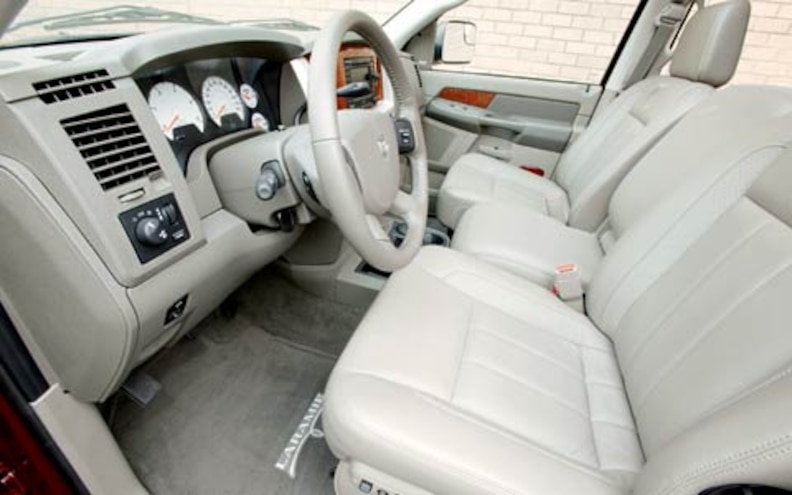 View Photo Gallery | 5 Photos
Photo 2/5   |   2006 Dodge Ram Mega Cab front Interior View
People-Oriented Pickup
Sales of full-size four-door pickups have tripled in the last five years, thanks to a new breed of buyers, folks who are more likely to use their trucks to haul kids than construction materials.
With this personal-pickup market niche in mind, Dodge designers and engineers set about massaging the cab-to-bed proportions of the existing longbed Ram 2500. To keep things simple, they retained its 160-inch wheelbase and 247.7-inch overall length, but ditched the eight-foot box in favor of a shorter six-foot, three-inch version.
That change opened up a 20-inch gap between the bed and cab, which designers then filled with a stretched passenger cabin. The result is a truck with the largest interior of any full-size four-door pickup on the market--more than a foot longer than the Mega Cab's closest competitor--and the hands-down class winner in terms of comfort and practicality.
Big Truck, Big Engines
Like all Ram pickups, the Mega Cab is available in three distinct models: half-ton 1500, 3/4-ton 2500, and one-ton 3500. Buyers also can choose from two different trim levels, including the upscale SLT and top-line Laramie.
With this truck, there are two excellent engine choices. The 5.7-liter Hemi V-8, which puts out an impressive 345 horsepower and 375 pound-feet of torque, is standard on 1500 and 2500 models. The 5.9-liter turbodiesel Cummins I-6, which cranks out 325 horsepower and a stump-pulling 610 pound-feet of torque, is optional on the 2500 and standard on the 3500.

View Photo Gallery | 5 Photos
Photo 3/5   |   2006 Dodge Ram Mega Cab top Diesel Engine View
A five-speed automatic is the only transmission offered with the Hemi, while the Cummins comes mated to either a new six-speed manual gearbox or an optional four-speed automatic transmission. Both powertrains can be had with rear drive or part-time four-wheel drive, which comes with a low-range transfer case.
Properly equipped, the Mega Cab 1500 can tow a respectable 7750 pounds. If you've got truly big toys to haul, look to the 2500, which can tow up to 12,900 pounds, or the 3500, which can handle trailers weighing up to 15,800 pounds.
First-Class Interior
Up front, the Mega Cab has all the same strong points as other Ram models, including clean styling, a functional layout, and decent leg- and headroom, even for big-and-tall types. While the front seat is good, the second row is where this new model really shines.
The extra inches grafted onto the cabin make the Mega Cab's rear seat downright limo-like. There's plenty of room for three adults across and legroom so abundant it puts the GM and Ford crew cabs to shame.
While all this room to stretch out is nice, it's only the beginning. Topping the back seat's list of gee-whiz features are the first-ever reclining rear seats in a full-size pickup. Add huge, wide-opening rear doors and a 60/40 split-folding rear seat that offers more than seven cubic feet of storage with the seat up and more than 70 cubic feet with both sides folded down, and you have an interior that's as practical as it is comfortable.
The cabin's other desirable qualities include reduced noise levels, power-adjustable pedals, optional side curtain airbags, and an available rear-seat DVD entertainment system. Comparing the Mega Cab's interior with those of other crew-cab pickups is like comparing an airplane's first-class cabin with the cheap seats in coach.

View Photo Gallery | 5 Photos
Photo 4/5   |   2006 Dodge Ram Mega Cab rear Interior View
On the Road
Slide behind the Mega Cab's steering wheel and you'll find the Hemi and Cummins engines provide impressive acceleration and remarkably quiet operation. While the Hemi may be the popular way to go (nearly half of all Ram buyers choose it), the Cummins's superior fuel economy, great gobs of torque, and excellent overall driveability make it our hands-down engine of choice.
On the road, both the two- and four-wheel-drive Mega Cabs handle surprisingly well. The ride quality also was quite good on 2500 models, but the 3500's heavy-duty underpinnings cause a slightly rougher ride.

View Photo Gallery | 5 Photos
Photo 5/5   |   2006 Dodge Ram Mega Cab top Hemi Engine View
Steering was nicely weighted and offered a precise feel that made the truck feel smaller than the 20-foot-long beast it is. When it comes time to get on the brakes, massive 13.9-inch antilock discs at all four corners produce sure stops with minimal fuss.
A Successful Trade-Off
Considering more folks are buying four-door pickups for personal use than ever, we think the Mega Cab's bed/cab trade-off succeeds brilliantly. Ultimately, we have to agree that, in the case of pickups at least, if a little space is good, a lot really is better.

- OF
By Alan Rider
4 Articles