The SUV for $3 a Gallon and Beyond

Mercedes-Benz builds the torquey 3.0-liter common-rail turbodiesel that's under the hood of the new Jeep Grand Cherokee CRD. You're going to hear more about that when the sport/utility goes on sale in the first quarter of 2007, Chrysler Group won't be shy about the DaimlerChrysler connection, either.
We took a limited drive in the Grand Cherokee CRD and can report it's a much better Jeep diesel than the discontinued Liberty CRD, which Chrysler says sold beyond expectations at 11,000 units. The Liberty's Italian-derived turbodiesel was an ancient four-cylinder that won't meet tough new NOx standards that come into play by the end of this year. The Grand Cherokee's Benz diesel is a quiet, smooth V-6 that comes to the States first in late 2006 in the Mercedes E320 CDI sedan. 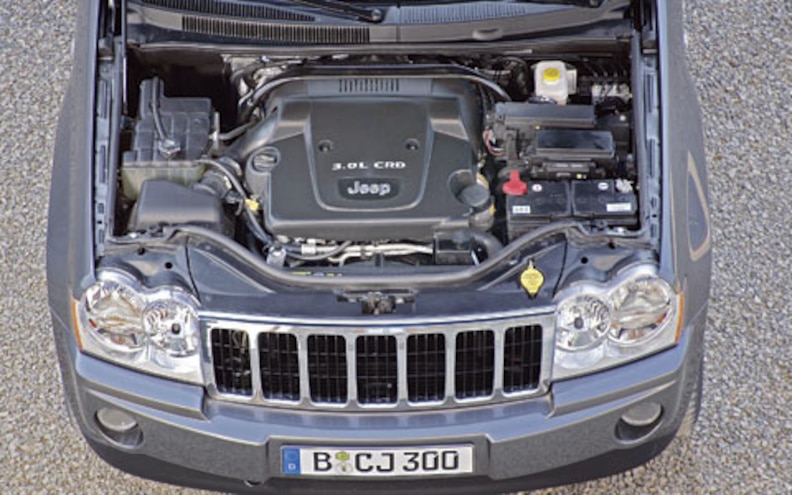 View Photo Gallery | 5 Photos
Photo 2/5   |   2007 Jeep Grand Cherokee Diesel engine
It's a worthy first diesel in a U.S.-market SUV, good for off-roaders or those who need to tow up to 7400 pounds. Jeep will deliver each Grand Cherokee CRD with five-percent biodiesel (B5) from its Jefferson Avenue assembly plant in Detroit. For the uninitiated, it's not gas-engine smooth; you'll feel some shake in the steering wheel at low rpm. But from inside, there's no smell and very little noise to hint at the fuel you're using. Estimated EPA is 19 mpg in the city, 23 mpg on the open highway.
The engine has to wind up past 2000 rpm for the turbo to do any serious work, so low-end torque doesn't feel great, and with the diesel's early 4500-rpm redline, you run through the torque band and the five automatic gears quickly. The CRD offers good sport/utility performance, which means it can get you into traffic easily, but it won't be mistaken for a performance vehicle. The engine makes 215 horsepower at 3800 rpm and 376 pound-feet at 1600, all the way through to 2800. 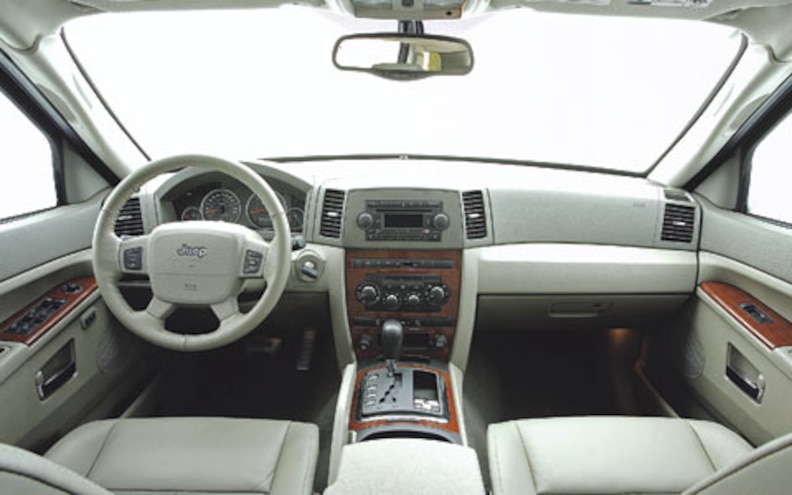 View Photo Gallery | 5 Photos
Photo 3/5   |   2007 Jeep Grand Cherokee Diesel interior
The Grand Cherokee has been on sale with a Mercedes turbodiesel in Europe since the 2005 model year, so import to the U.S. is a no-brainer. And if it does well here, the engine might find its way into other U.S. Chrysler products, including the 300 and Dodge Durango. What's more, it looks like the first in an onslaught of European diesels in U.S.-market SUVs.
What's Bluetec?
DaimlerChrysler has developed a treatment technology for diesel exhaust that allows it to meet the most stringent pollution restrictions. The technology, called Bluetec, will make its debut in Mercedes-Benz passenger cars and is slated to appear in other Chrysler Group diesels. A concept Grand Cherokee vehicle was shown at the 2006 North American International Auto Show in Detroit.
The system, now called Selective Catalytic Reduction or SCR, like systems under development by other carmakers, injects urea into the exhaust, where it reacts with oxides of nitrogen, helping eliminate troublesome NOx from the emissions. NOx is formed by the high combustion pressures in diesel engines and has been a key obstacle to making diesels as clean as today's gas engines.
Urea is a key component in liquid bodily waste, and as such isn't a popular topic of conversation for many. Chrysler's solution to this negative association is to dye it blue and give it a new name. The company is wrestling with the EPA over exactly how the system will work in the United States. Government regulators want the vehicle to shut down if it's allowed to run out of Bluetec fluid, a course of action that Chrysler, not surprisingly, finds unacceptable.
The company will provide refills at its dealers and has said that it's discussing the possibility of offering Bluetec fluid at Jiffy Lube centers to provide an even larger network of refill outlets. The system includes a catalytic converter and a particulate trap, which also can help scrub the exhaust of unburned hydrocarbons, carbon monoxide, and the black sooty particulates that make diesels look smoky when accelerating. Look for more SCR information as more vehicles use the technology.Dan Carney