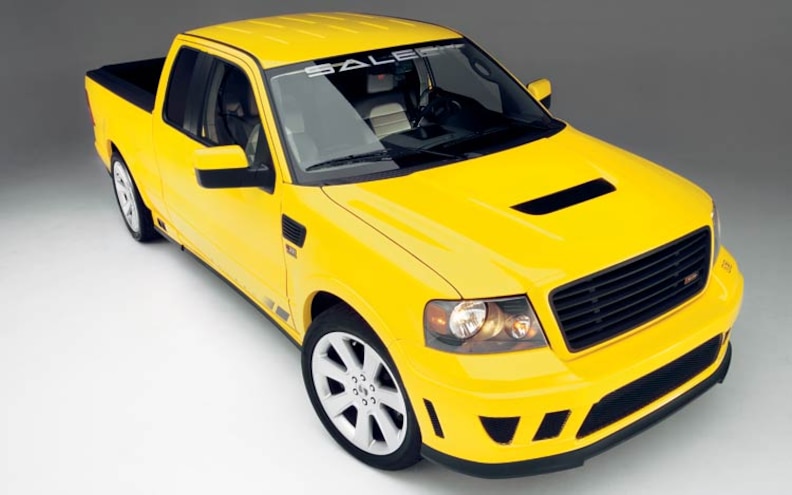 Maybe there's something in the water. Maybe the planets are lining up. Or maybe it's just that so many people still remember and miss Ford's muscle-truck masterpiece, the Lightning. Whatever the reason, Ford F-150 performance option packages pushing 450 horsepower have begun sprouting up like weeds.
The first buildup was from Saleen, maker of the S7 supercar, Ford GT, and numerous Mustang models. The big difference between Saleen and other performance-part companies is that Saleen is technically considered an original equipment manufacturer, in many ways on par with GM, Ford, and Dodge. It's the OEM of record with full responsibility for the warranty on the vehicle and considering how extensive its modifications are to a stock FX2 Ford F-150 SuperCab, it should be. 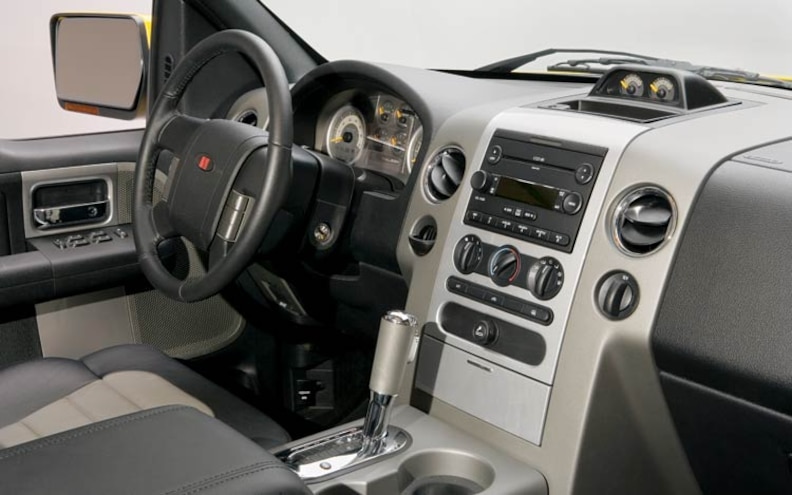 View Photo Gallery | 9 Photos
Photo 2/9   |   ford Saleen S331 Sport Truck interior View
This isn't just a body kit, a few suspension mods, big wheels and tires, and a supercharger bolt-on. Plenty of companies do that, and with the new F-150 still two years away you can expect a few more builders to dip their toes into those waters. Regardless, as the OEM of record, Saleen must put each of its models through the same NHTSA crash-testing regimen, the same EPA fuel-economy tests, and the same governmental requirements as any other manufacturer selling vehicles in the U.S. On the downside, this creates huge headaches for Saleen, as it has to navigate the treacherous legal waters of performance parts and dealer accountability.
Due in large part to its long and friendly relationship with Ford (Saleen built all the Ford GT supercars), Saleen has over 200 dealerships across the country that sell and maintain its newest vehicle (also its first truck), the S331 Sport Truck. Saleen offers two different trucks based off a two-wheel-drive FX2 F-150 SuperCab, each defined by whether it has one of Saleen's custom-designed, inverted, twin-screw-type superchargers mounted to a three-valve 5.4-liter V-8. With a little computer work, an intercooler, matched fuel injectors, and a few other small modifications, the S331 makes 450 horsepower at 5200 rpm and produces 500 pound-feet of torque at 4000 rpm. The supercharged version is the one we spent most of our time driving, and we had a blast.
All S331s (a name inspired by the 5.4-liter V-8's 330-cubic-inch displacement) have specially tuned (and lowered) front and rear springs and new shock absorbers all around, specifically designed to deal with the heavier 23-inch forged, one-piece aluminum wheels holding 305/40R23 BFG high-performance tires. The resulting feel of the lower center of gravity, stickier and wider tires, and added horsepower is stunningly well balanced. On our makeshift autocross course, the steering was vastly improved over stock as the truck's squatty stance and rear-wheel-spinning thrust gave the 5500-pound pickup the sense and agility of a much smaller and lighter sprint car. This S331, which had several of Saleen's top-level performance options, ran 6.7 seconds from 0 to 60 mph, with an unofficial quarter-mile time of 15.0 seconds at 92 mph. It stopped from 60 mph in an impressive 124 feet. 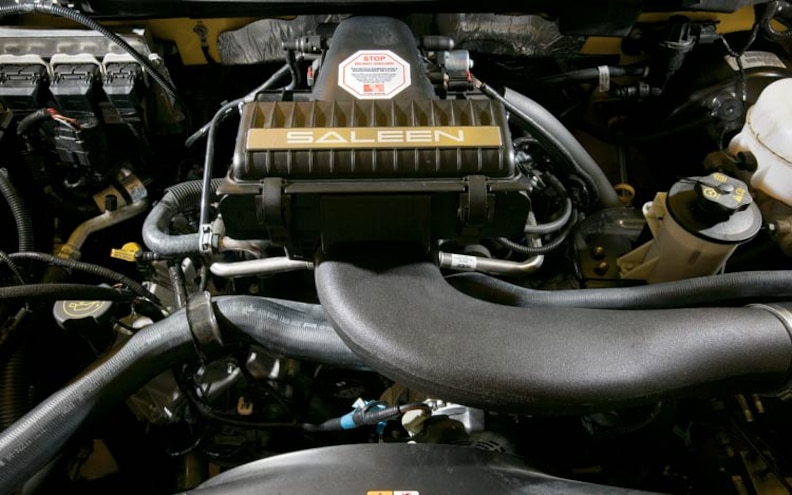 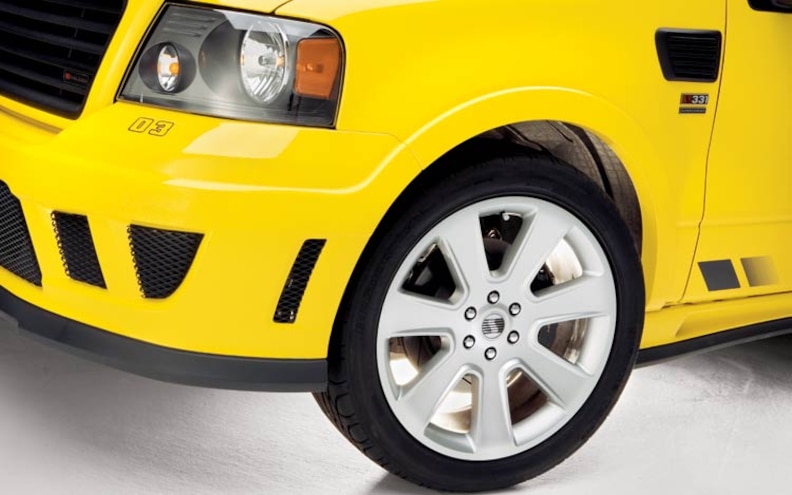 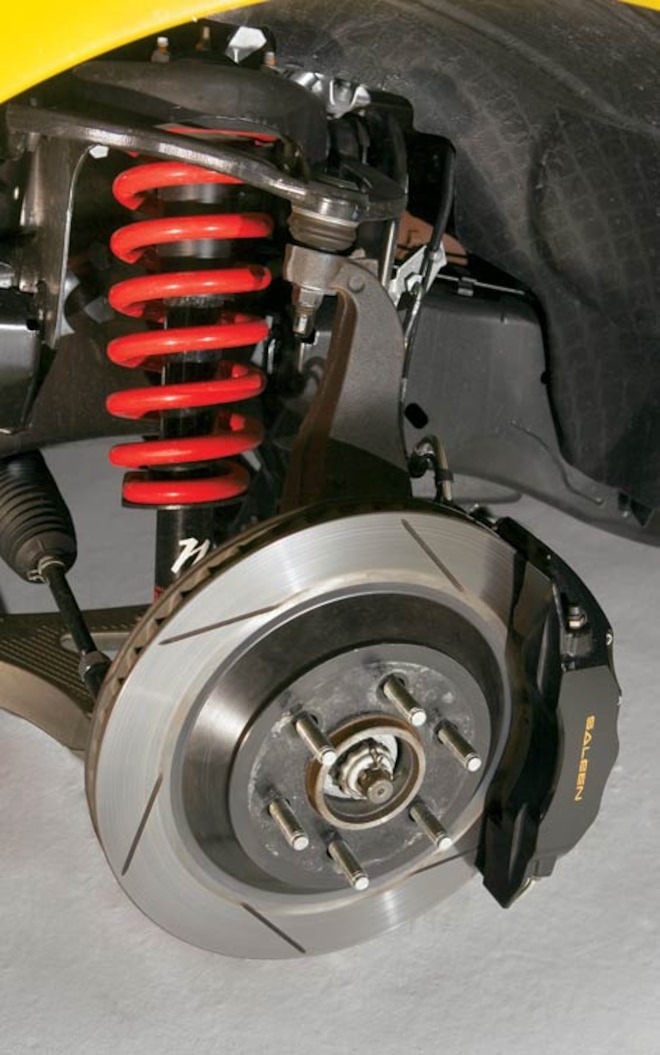 View Photo Gallery | 9 Photos
Photo 5/9   |   ford Saleen S331 Sport Truck exterior View
In an odd way, our favorite options are actually connected to the truck's design philosophy. Saleen engineers didn't want to just offer another modified sport truck that can't tow or haul anything. Even going back to the original SRT-10 Ram or earlier GM SS products, pickup-truck capability was typically the first thing sacrificed when building performance credibility.
Not so with the S331. A base-model S331 is capable of its full payload rating (1300 pounds) and is able to tow a 5000-pound trailer, just like a stock F-150 SuperCab with the 5.4-liter V-8. But if you want more towing power, Saleen offers a few cool options. The first is an integrated rear bumper with a hidden Class-IV tow hitch. Combine this with the Firestone load-leveling airbag setup, a dual-core radiator, and high-flow cooling system, and the result is 9000 pounds of towing capacity. But that's not all. Saleen also offers a set of matched 15-inch front disc brakes (stock is 13 inches) with six-piston calipers. Other options include chrome wheels, a thumping Rockford Fosgate Punch sound system, HID headlights, spray-on or drop-in bedliner, retractable aluminum bed cover, aluminum induction hood, and an amazing color pallet to choose from. Saleen even has a $20,000 liquid-metal paint option that looks so fluid, it's like you could dip your hands right into the truck's body panels.
Non-supercharged Saleen S331 Sport Trucks start at $44,000, with S331 S/C models beginning at $54,000. Our test unit, with all the options except the crazy paint scheme, totaled just under $60,000. The vehicle comes with a full three-year/36,000-mile warranty from Saleen and Ford (coverage depends on which components you're talking about). Either way, the truck has style, monster power, and it'll still tow a trailer full of toys. Not a bad combination. Now how about that SuperCrew model, say, in a 2500 configuration?

View Photo Gallery | 9 Photos
Photo 8/9   |   ford Saleen S331 Sport Truck exterior Detail View
Other Ford Playmates
FX2 Sport
This truck was built to be a rolling billboard for what anyone could do with his own F-150 with help from Ford Racing Parts (www.fordracingparts.com). Assembled only from available parts, this runner has been clocked running sub-6.0-second 0-60 times. Figure the total bill to replicate this beast would be around $25,000, with all the body flash and paint.
Foose F-150
Car designer Chip Foose is riding the wave, too. At the New York auto show, Ford revealed a limited-edition Foose F-150 that Ford will sell, which includes 22-inch wheels, a supercharger, body cladding, and several Foose-designed interior upgrades. Reported power ratings have the Foose F-150 at 450 horsepower and 500 pound-feet of torque.