Subaru finally has a diesel-and it's the first boxer turbodiesel in a passenger car. Ever. The diesel option not only gives the company a real presence in Europe, but the engine's excellent fuel economy-near an estimated 50 mpg on the highway-will make it easier to comply with the upcoming CAFE legislation. Even though it won't be sold in America for another two years, Subaru gave us the opportunity to try the diesel out in Euro-spec Legacy sedan/wagon and Outback models, which will be officially revealed at the Geneva motor show in March just before they go on sale in Europe.
Powering the trio is a 2.0-liter DOHC horizontally opposed flat-four common-rail diesel putting out 148 horses and 258 pound-feet of torque. (VW's 2.0-liter turbodiesel, coming later this year, provides 140 horsepower and 235 pound-feet.) Its acceleration won't break any records, but its excellent torque, available at a measly 1800 rpm, ensures that this car effortlessly goes up grades in fifth gear and has no trouble merging at freeway speeds. The boxer layout provides the same advantages as in Subaru's gas-powered offerings: lower center of gravity, reduced vibration, lighter weight. 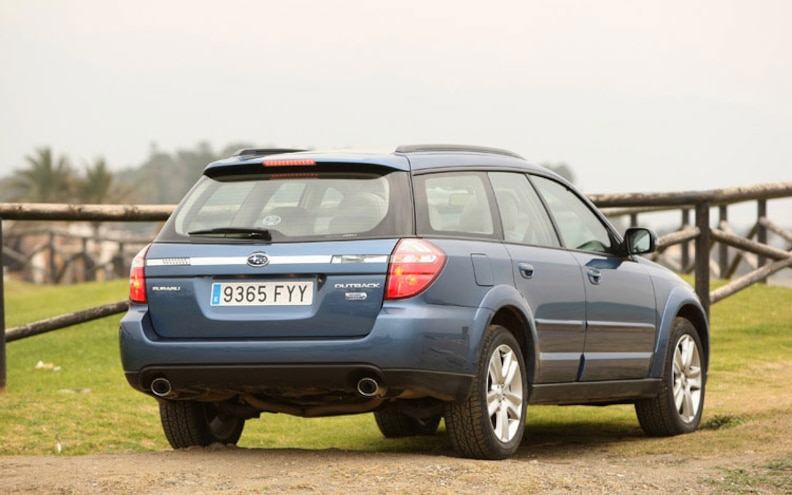 View Photo Gallery | 11 Photos
Photo 2/11   |   2008 Subaru Boxer Turbodiesel Euro Spec outback Rear Profile
The decision to stay with the boxer layout may have been an easy one for Subaru, but turning that into reality was more complicated. The challenge was to make the engine strong enough to handle the increased demands of diesel without outgrowing the engine bay. Its 16.3:1 compression ratio required a longer stroke (now 3.39 inches compared with the 2.0-liter gas four's 2.95; the bore was reduced by 0.23 inch), a problem solved with Subaru's asymmetrical connecting rod and crankshaft design, seen in the Tribeca's 3.6-liter flat-six. This allows for the longer stroke without making the engine significantly wider. The short, rigid crankshaft also helps reduce vibration and noise as well as engine length.
Subaru moved the variable-nozzle turbocharger to the bottom of the engine (mounted between the exhaust ports and catalytic converter), which improves emissions and helps keep the center of gravity low. The intercooler is still on top of the engine near the intake manifold, with longish hoses connecting the turbo to the intercooler-yes, the hood scoop is functional. Emissions are handled by an EGR system, particulate filter, and an oxidation catalytic converter, making the engine EURO IV compliant. (Testing has not yet been conducted for the U.S., but a urea-injection selective reduction catalyst is likely to be required here.) Backing the turbodiesel in our testers was a new five-speed manual transmission, geared specifically for diesel applications. While Subaru is considering a six-speed manual, expect this and an automatic to be offered in the U.S. Some changes were made to accommodate the new powerplant, including the use of liquid-filled engine mounts, modified spring rates, larger CV joints, electric power steering, and larger front disc brakes. 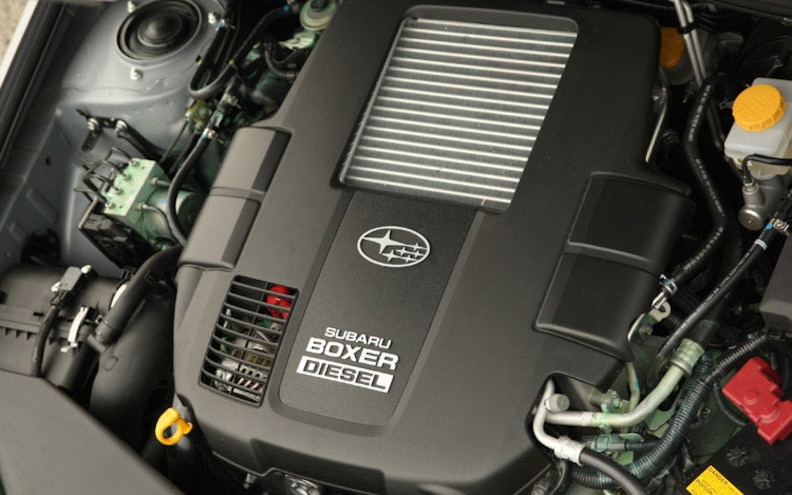 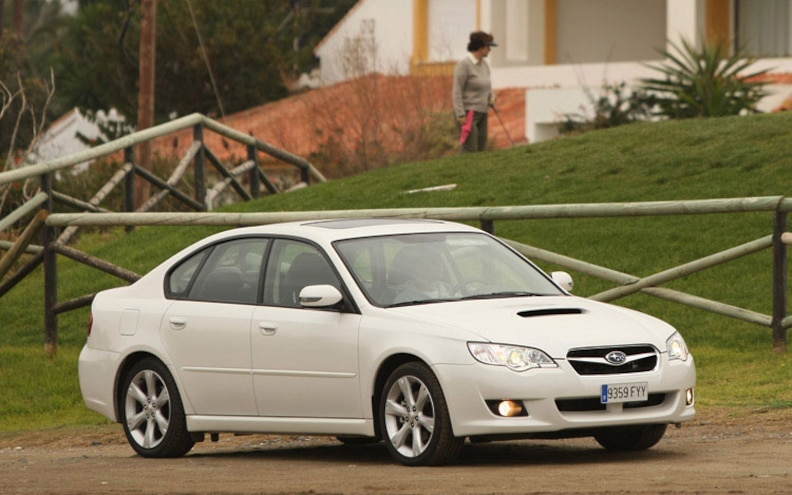 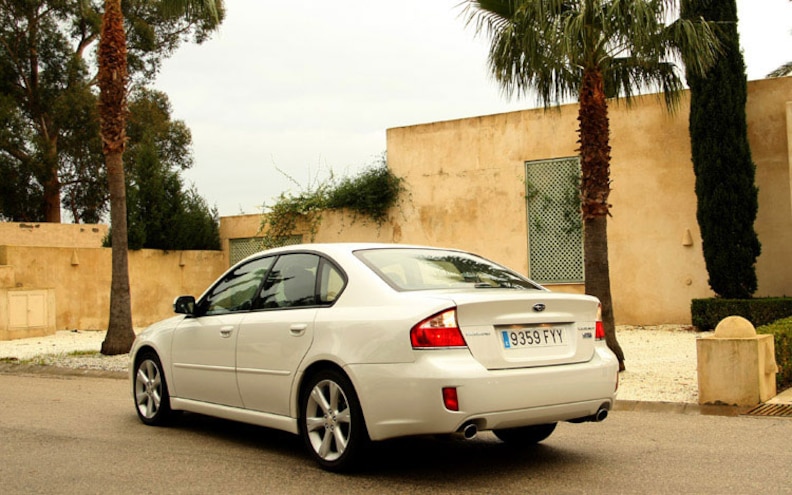 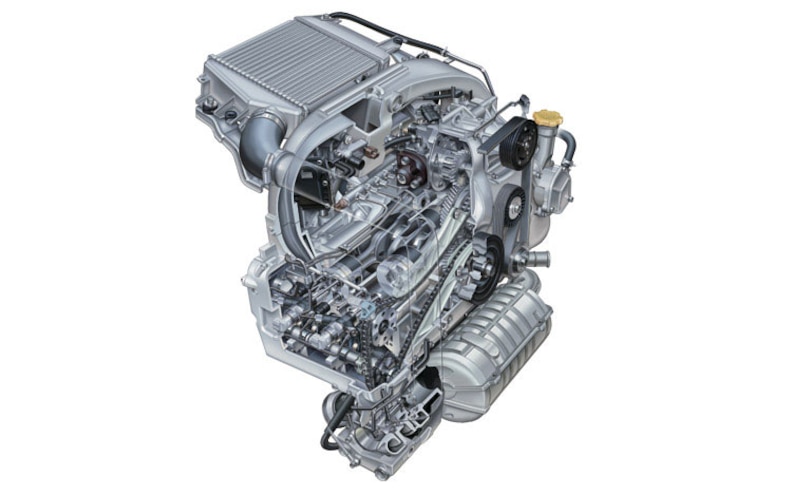 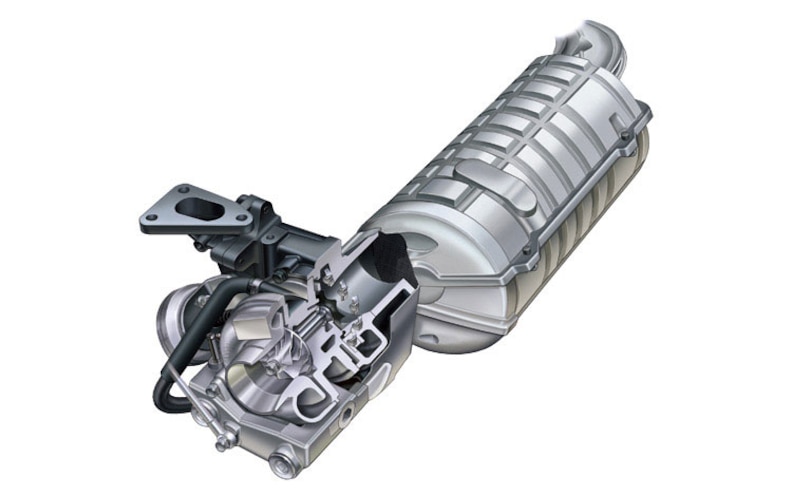 View Photo Gallery | 11 Photos
Photo 7/11   |   2008 Subaru Boxer Turbodiesel Euro Spec turbocharger Cutaway
The topline models we tested came with nav, leather, power driver's seat, moonroof, and 17-inch wheels fitted with Bridgestone Potenzas. The only thing that really took getting used to was the pushbutton start, a feature not offered in the States. After a few tries at caressing the right side of the steering column and dash like a loved one's shoulder and finding no button (it's on the left), we were on our way. The engine is somewhat noisy at idle, but that disappears once you get up to speed. Subaru has done an excellent job of isolating engine noise from the cabin, and despite some wind noise, it's still easy to chat with passengers without having to raise your voice. This turbodiesel is surprisingly smooth, with little turbo lag. It hums along at freeway speed at 2000 rpm and eats up mountain roads in third gear. The car's weight is still biased toward the front, but the vehicle is well balanced, stable, and sticks to the road. The new engine adds about 75 pounds to the Legacy and Outback.
Subaru has gone to great lengths to make this engine compact, an achievement that means the company can put this diesel in a wide variety of cars in the line. It would make perfect sense in the Forester, and perhaps the Impreza. However, when it comes to sales, the success of this engine in the U.S. is going to depend on the cost factor. Pricing hasn't yet been announced, not even for European markets, but this engine option could add $2000 or more to the bottom line for America.