It's big enough for eight (or five adventurers with gear), stout enough to cross a forest, strong enough to pull a sizeable trailer, and has a new Platinum trim level: It's the all-new, second-generation 2008 Toyota Sequoia. 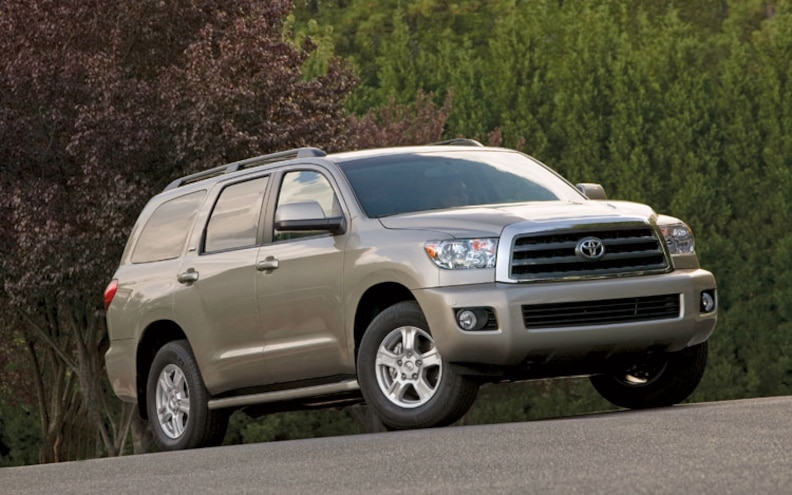 View Photo Gallery | 8 Photos
Photo 2/8   |   2008 Toyota Sequoia SR5 front View
The Sequoia picks up at the B-pillar where the new Tundra leaves off, beyond which virtually everything is new. Sheetmetal humbly adheres to Toyota SUV styling standards and carries the same big, bright name line above the rear plate, a more finished front end than the Tundra, and doesn't really look big until you're right next to it. On a four-inch-longer wheelbase than the previous model's, it's about an inch wider and longer overall and a minimum of 580 pounds heavier. The usual suspects are responsible for the extra heft-safety features, fully boxed frame, structural stiffness, and added lux. Plus, the aluminum 5.7 and six-speed are 50-60 pounds heavier than the iron-block 4.7/5A (an impressive feat), and the independent rearend still has lots of steel in it. In an ever-expanding world, Toyota has sensibly kept some dimensions down-less headroom between the doors, less legroom in the second row, seven-cubic-feet less interior volume, but a more useable third row. 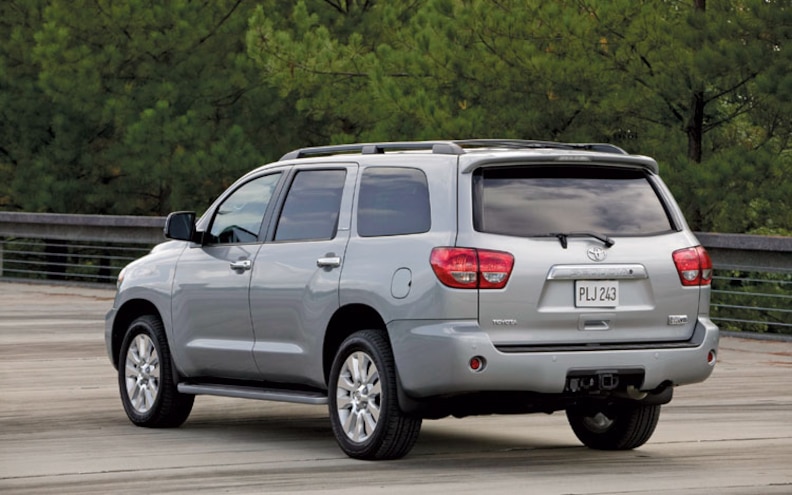 View Photo Gallery | 8 Photos
Photo 3/8   |   2008 Toyota Sequoia Platinum rear View
It's still big and for the most part drives that way. Isolation matches better body-on-frame designs, with minimal shudder on rippled pavement or washboard, not helped by our tester's 20-inch wheels. Body roll is evident yet controlled and you're allowed more latitude before stability electronics deem you incompetent; the steering is nicely weighted and cuts a tight U, and ride motions are generally settled (if any of your passengers has a weak stomach, avoid the Platinum-optional adjustable damping Comfort setting). Less impressive are high brake-pedal effort required to slow the mass and noticeable tread noise creeping in from behind, regardless of tire choice. 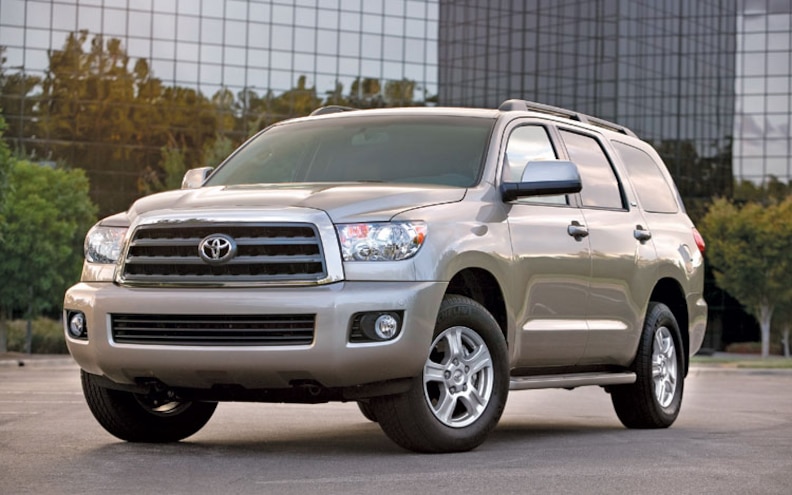 View Photo Gallery | 8 Photos
Photo 4/8   |   2008 Toyota Sequoia SR5 front View
A valved main and additional secondary muffler keep the 5.7-liter quiet until you summon serious thrust, the six-speed auto is near faultless, and the 4WD system can be used on pavement in 4-Hi. The Torsen center diff runs a nominal 40/60 front/rear drive split and can be locked in 4-Hi or 4-Lo, but it is without a Neutral position for flat-towing behind a giant motorhome.
As expected, the 4.7-liter and five-speed auto, standard on SR5 and Limited, work harder than the larger V-8-the Sequoia's empty weight is now near equal the GVW of the original Tundra 4.7. We expect the smaller engine/trans combo will be bought solely on price. We place the 5.7/6A premium at about $850 and can't imagine anyone passing up 100 horsepower and better fuel economy. 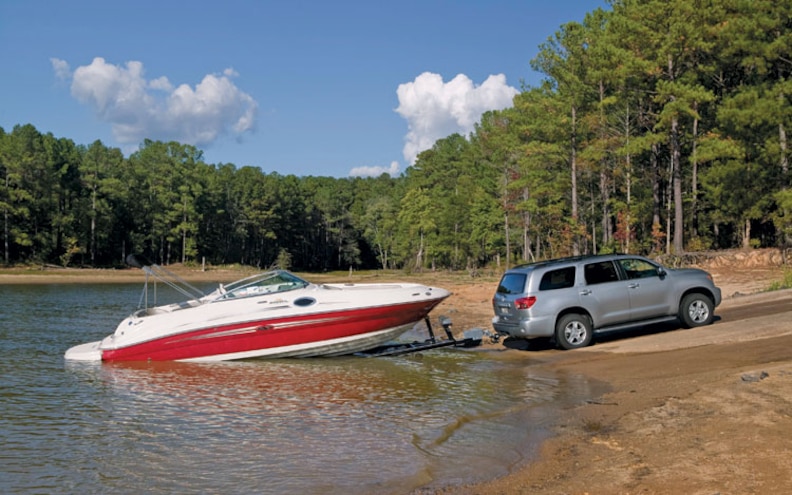 View Photo Gallery | 8 Photos
Photo 5/8   |   2008 Toyota Sequoia SR5 side View
The rear suspension uses dual A-arms and a wide arm carrying the outboard spring, with the anti-roll bar located forward. Available across the board is load-leveling air suspension with high and low manual positions that change rear ride height by 30 mm; combined with the rear-camera option, this makes hitching a trailer simple. Figure around 8000 pounds for max trailer on a 4.7 (applies fully loaded) and 10,000 for the 5.7, limited by GCWR to 2WD rigs that are empty except for the driver.
Few will notice the slight decrease in some measures, as the Sequoia offers plenty of space. The Platinum replaces the second-row center bench with two captain's chairs and a console, which flips open to maintain a flat-floor cargo area when all rows folded. A Limited can be ordered with the same seats but the console is omitted in the walk-through design.

View Photo Gallery | 8 Photos
Photo 6/8   |   2008 Toyota Sequoia Platinum interior View
Third-row access is one-pull simple, and on some models the 60/40 third row folds and reclines electrically, a chore second-row riders must do manually. The three-section middle bench slides fore and aft, the center section travels further forward so your child-seat reach is within reason. Three-zone climate control is standard and supports wide temperature gradients via dash, floor, and four overhead rear vents.
The hatch, powered if you like, maintains the rolldown glass section for light load access, the floor slopes slightly to the rear for easier unloading, and there's a wide bin below the floor that could use some dividers or nonskid surface on the bottom. Sequoias carry a full-size spare on a steel wheel.
This may be the only 'ute where the optional seven-inch nav screen is closer to the passenger than the driver, and the reach wouldn't be noticed as much if the passenger were allowed to key in info on the move. It doubles as rearview monitor and controller for the 600-watt, 14-speaker JBL Synthesis system.
Dash layout and instruments parallel Tundra grades, with only a few more buttons for the additional features. The gadget-request sheet includes intuitive parking assist, dynamic laser cruise control (Platinum only), DVD player and AC outlet, nav w/Bluetooth support for six cell-phones, and so on.