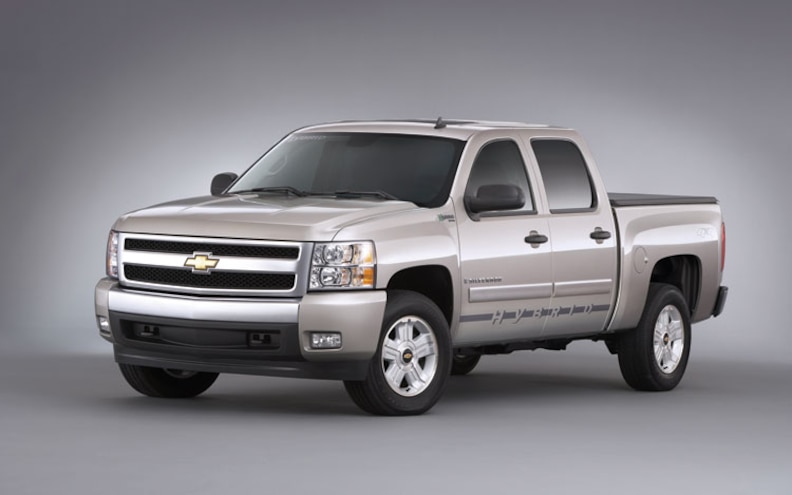 You have to give GM credit. When other automakers were megaphoning that their hybrid powertrains were mounted to lightweight subcompact passenger cars, General Motors went in a completely different direction-it opted to put these fuel-saving powertrains in bigger, high-volume utility vehicles where they can do the most good.
Appearing first in the Chevy Tahoe (on sale now), the new 2-Mode Hybrid system was jointly developed by Daimler-Benz, BMW, and GM. The system will roll out into the GMC Yukon, Cadillac Escalade, Dodge Durango, Chrysler Aspen, and BMW X5 over the next 12 months. Near the end of that rollout, the 2009 Silverado will be the first pickup truck to get the technology.
As with the GMT900 SUV hybrids, the pickup won't look much different from a regular Silverado, with the exception of stickers on the sides and windshield, making sure everyone within 100 yards can tell this vehicle is different. 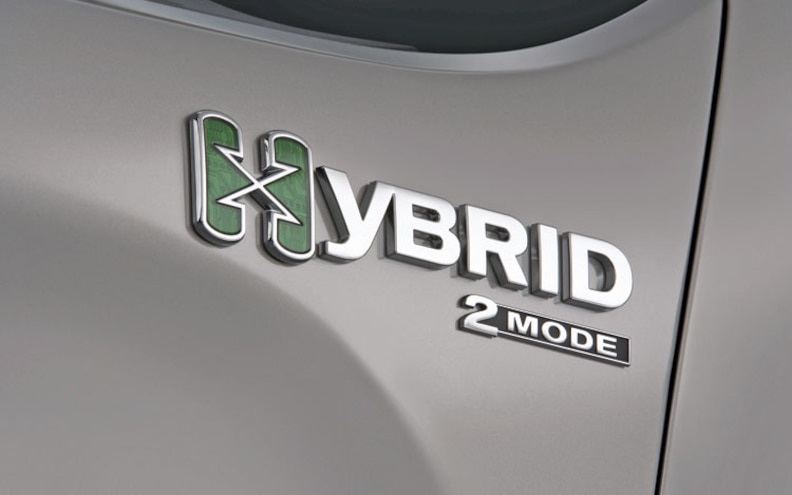 View Photo Gallery | 3 Photos
Photo 2/3   |   2009 Chevrolet Silverado Hybrid badge View
The system uses two powerful electric motors and a 300-volt battery pack for various power modes. It's called a 2-Mode Hybrid because in Mode 1 the first electric motor (which also replaces the torque converter) silently drives the truck off the batteries up to 30 mph and can reportedly do so for as far as two miles, depending on charge levels. Mode 2 kicks in above 30 mph, when both electric motors supplement the all-aluminum 6.0-liter OHV V-8. Amazingly, the two electric motors, gears, and electronic variable transmission all sit inside a regular transmission bellhousing. There are two sets of gears for the electric motors-one each for low (Mode 1) and high (Mode 2) speeds-and a third set of four fixed gears, specifically designed to work like a normal transmission during heavy hauling or towing. The Miller-cycle 6.0-liter V-8's Active Fuel Management cylinder-shutoff software is more aggressive than in nonhybrids, allowing the engine to run in V-4 more often at speed. It also uses an automatic engine shutoff when coasting up to a stop or sitting at stoplights to further save fuel.
Another change worth mentioning is a clever 42-volt steering setup to save weight and reduce parasitic drag. It also contributes to overall fuel improvements, which are reported to be 25 percent better on average than in a nonhybrid model. GM also is expecting as much as a 40-percent improvement if you do a lot of city driving. The transmission uses a standard column shifter that has "D" and "M" settings to identify automatic and manual (via thumb-shifter) modes. And, as in other GM half-tons, there's a towing setting (a button at the end of the shifter stalk). 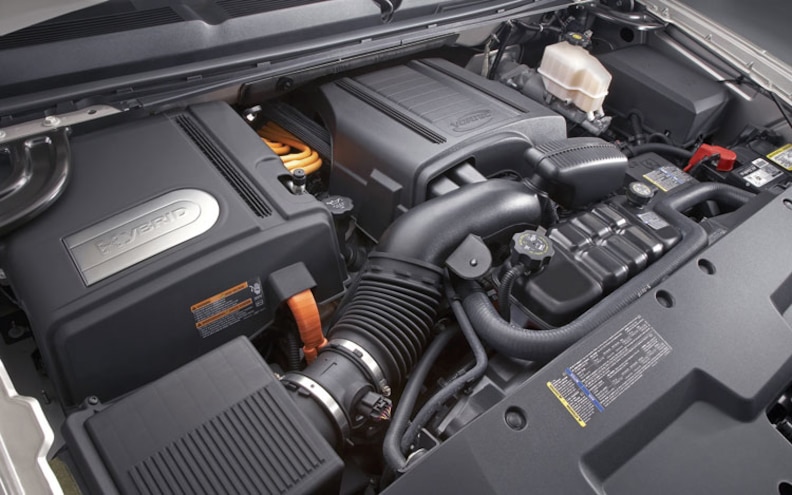 View Photo Gallery | 3 Photos
Photo 3/3   |   2009 Chevrolet Silverado Hybrid engine View
All 2-Mode Hybrids will be RWD or 4WD crew cabs. For the first model year, Silverado Hybrids will be offered with the "pure pickup" interiors, StabiliTrak electronic stability control, a locking rear axle, and the trailering package. These vehicles will be able to tow up to 6100 pounds so there is a small capability penalty for the powertrain; also, since the system adds about 350 pounds, you can take that right off the payload number. Although pricing won't be announced until we get closer to the Silverado Hybrid's on-sale date (near the end of 2008), look for this powertrain package to cost a significant premium. If Hybrid Tahoe pricing is any indication, we'd predict it'll be somewhere in the $35,000 range.