We Don't Know the Name-But the Face Rings a Bell 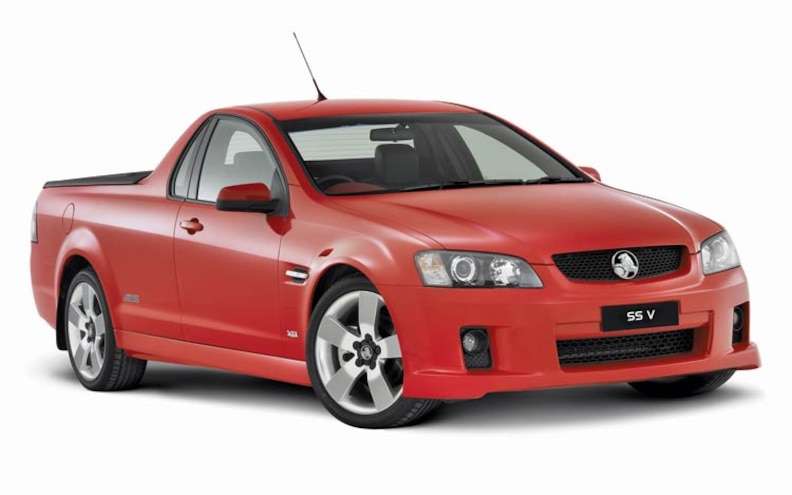 For a long time, rumors of a new El Camino or Caballero have been flying fast and furious. Despite Chevrolet's and GMC's histories with car-based pickups, Pontiac will be the brand that receives this truck first for 2010. Those lusting after the Holden Ute, the original Australian model, will finally get a chance to drive this ultra-fast pickup. When it comes stateside at the end of 2009, the G8 sport truck, based on the same platform as the Pontiac G8 sedan, will come with the G8 GT's 361-horsepower, 6.0-liter V-8 with gas-saving Active Fuel Management, backed by a six-speed automatic. Everything from the B-pillars forward is the same as in the sedan, so it would make sense for that car's V-6 and perhaps its high-performance V-8 to follow. (The G8 is available with a DOHC 3.6-liter, 256-horsepower V-6 and, for 2009, a 402-horsepower, 6.2-liter, LS3 small-block V-8.)
Pontiac isn't pretending this is a real pickup, but does claim the G8 sport truck will offer the performance of a sporty coupe and some of the function of a light truck. We don't know yet if the model is truly capable of either, but Pontiac estimates a 5.4-second 0-to-60 time (which could be as low as 4.7 with the GXP engine) and a maximum towing capacity of 3500 pounds. 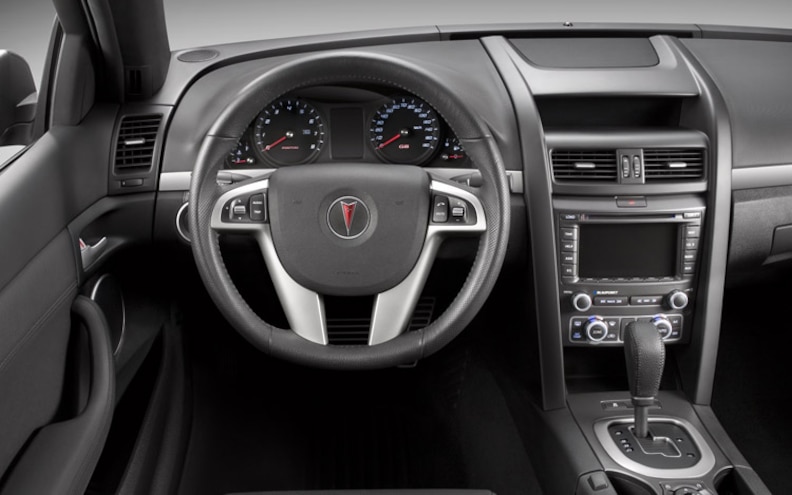 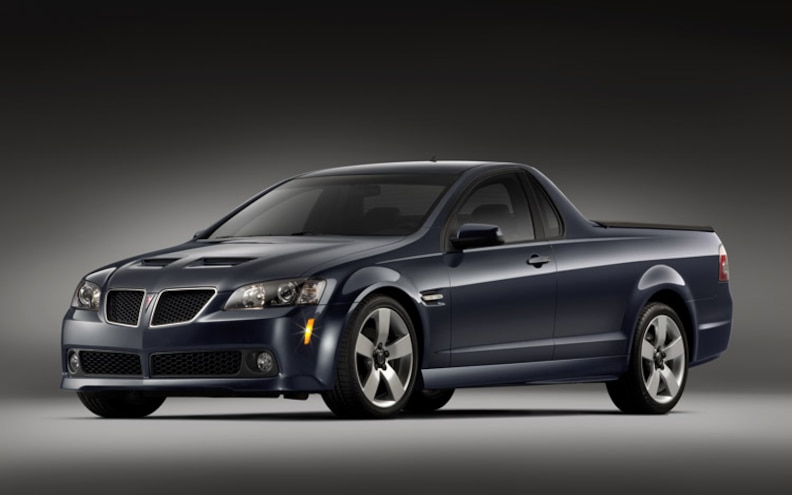 View Photo Gallery | 7 Photos
Photo 6/7   |   2010 Pontiac G8 Sport Truck front Three Quarter View
Despite the commonalities in front, this isn't just a truck shape plopped onto a car's body. The wheelbase is longer-adding four inches onto the sedan's-and overall length increased by six inches. In addition, Pontiac claims the body's structure was reinforced with more than 60 new parts, helping bolster it for use as a truck. Equipped with independent suspension with electronic stability control, the pickup has four-wheel disc brakes (twin-piston calipers in front) with ABS. Other standard safety gear includes StabiliTrak, tire-pressure monitoring, and six airbags. It will initially be sold as a regular cab, with one bed size and rear drive. The bed, which comes with a composite liner and soft tonneau, is 6.2 feet long and holds roughly 43 cubic feet of gear. Max payload capacity is 1074 pounds. The truck rides on either 18- or 19-inch wheels, with a choice of summer or all-season tires.
The cabin comes with the same amenities as the G8's tilt/telescope wheel, standard four-way-adjustable cloth seats (six-way leather optional), power controls, dual-zone climate control, cruise control, driver info screen, five-speaker 230-watt Blaupunkt radio/CD/MP3 system, 6.5-inch display, and Bluetooth connectivity. You can stow 8.5 cubic feet of gear behind the seats-that's more than we'd expect in a regular cab-and there are also two covered storage bins under the bed floor. View Photo Gallery | 7 Photos
Photo 7/7   |   2010 Pontiac G8 Sport Truck rear Three Quarter View
It's being referred to as the G8 sport truck, because GM hasn't decided on a name yet. (Don't expect it to be called the Ute, either.) Pontiac is running a contest on its Web site to let you come up with a name, and the winner gets a new truck. We should know the new name by the time you read this. Contest rules cite the winner as being randomly selected-we presume this means they will be picked from those who came up with the best name, not that the truck's name will be randomly chosen.
As it currently stands, this is a truck that will appeal to a limited group of people-perhaps those who need to carry sports gear and light home-improvement supplies that are too big to fit in a sedan's trunk. For light cargo-carrying capability and car-quality handling, this could be a good compromise. But the regular cab can't hold more than two people, there's no all- or four-wheel drive, and the car-based platform guarantees payload and towing capacity are severely limited. However, the potential for decent fuel economy and relatively low MSRP is high (especially if the V-6 is made available), and the chance to drive the world's fastest truck could be just around the corner-in 2006, the HSV Ute reached a top average speed of 168.7 mph, handily beating the Lightning and Ram SRT10 numbers. We'd like to see a crew-cab offering, as well as AWD. Until then, it's merely another car-based truck-like vehicle, with less capability than the Ridgeline.