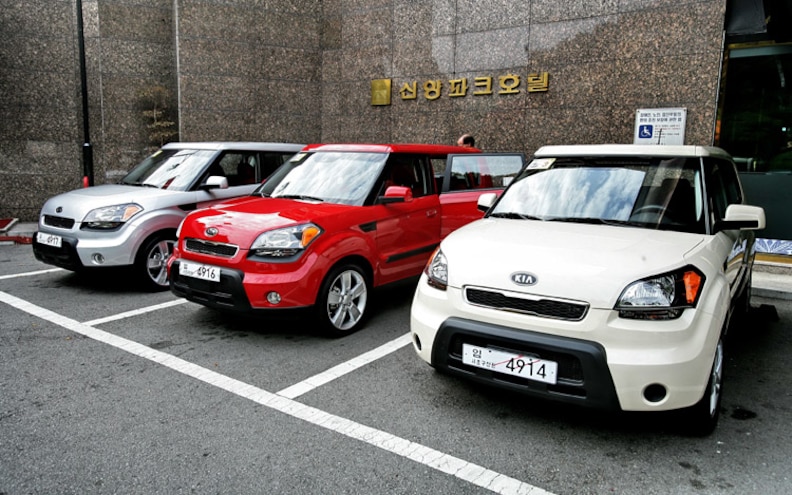 Those who were disappointed with the upsized and redesigned second-generation Scion xB may have a new vehicle to consider. The 2010 Kia Soul, introduced as a concept at the 2006 Detroit auto show and teased for the last nearly three years, contains the fuel efficiency and smart interior packaging of the first xB, wrapped in a likeable, edgy body unlike anything Kia has ever sold here before.
North American buyers will have a choice of engines: a 2.0L four at launch and a 122-hp, 1.6L later on. The larger I-4 comes with either a five-speed manual or four-speed automatic, the smaller is only offered with a manual. The front-drive Soul will be available with four trim levels: Soul, Soul +, Soul ! (exclaim), and Soul sport, and though pricing hasn't been announced (expect that at the Los Angeles auto show later this month), Kia hinted the MSRP will be highly competitive. When the Soul goes on sale in North America in March 2009 as a 2010 model, we expect it to start around $15,000-$16,000 and top out at $20,000. 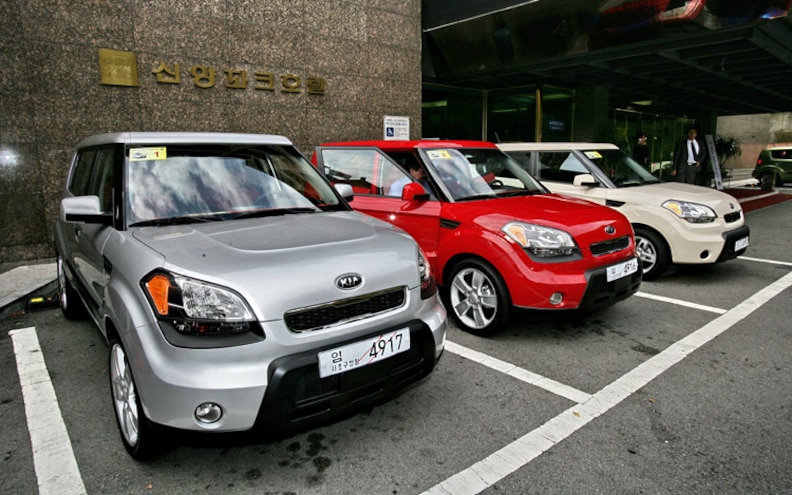 View Photo Gallery | 13 Photos
Photo 2/13   |   2010 Kia Soul triplet Front Three Quarters View
At first glance, the Soul looks much like the concept, except that the Peter Schreyer-designed production version is now much more car and much less crossover. Based on a reinforced, stretched version of the Rio platform, the car is cute and instantly likeable and comes in eleven colors (eight at launch) with names like Alien and Dune (Euro-spec cars have much more charming paint colors like Tomato Red and Vanilla Shake). Like the Scion, a strong emphasis is being put on the potential for customization and accessorizing this car. Several options are offered, including a red and black interior, beige and black hound's tooth seats and similar accents on the tailgate and hood, several wheel choices, different bumpers, stereos, and body mods; what we don't know yet is which of these features will be available in the United States.
We spent some time behind the wheel of a Soul + (2.0L, 142-hp four), with the five-speed manual transmission and 16-in. wheel and tire package. The engine provides plenty of power for a vehicle this size, feels significantly quicker than the first-gen xB, and will probably outrun the Fit in a straight line. But it's somewhat unrefined and noisy (which, considering the price point, isn't a serious problem). The five-speed helps eke out all of the power the Soul has to offer -- which is good, because peak hp is at 6000 rpm), but we'd expect the automatic transmission to be perfectly acceptable (more on that once we get to try it). What we don't understand is why the company didn't use a five-speed automatic instead of a four. The five would be more competitive with its rivals, would provide even better fuel economy than the estimated 31 mpg for the 2.0L, and fifth gear would almost definitely be welcome at higher speed. 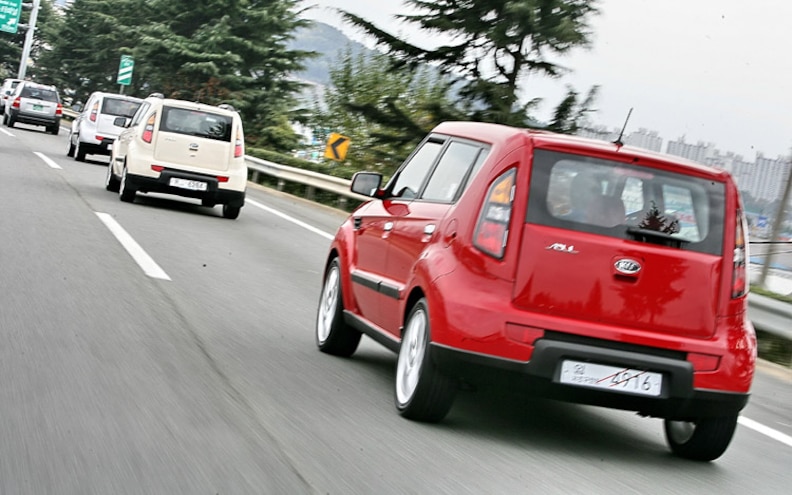 View Photo Gallery | 13 Photos
Photo 3/13   |   2010 Kia Soul rear Rolling View
The Soul is about six inches shorter overall than the new xB and about six inches longer than the first-gen Scion -- and just as long as the Fit, with a 12-in.-longer wheelbase. It isn't a performance car, but does feel sportier than basic cars in this size and price category. Suspension was tuned to provide a firmer ride, which it achieves, but some may not like the amount of bumps and road irregularities transmitted into the cabin. What didn't come through, even in our preproduction model, were any squeaks or rattles. We did notice that in turns, the Soul exhibited a bit more body roll than expected.
The interior is a lot more appealing than a traditional economy car's and less out-there than the xB's. With basic black cloth like our tester's, most of the cabin was black with red LED lighting on the stereo and red accents on the gauges. The red and black cloth interior gives the Soul a much more youthful attitude. Aux and USB jacks are standard, and options include Sirius, Bluetooth, power sunroof, redundant steering-wheel controls, and an eight-speaker system. Front and rear rows are surprisingly roomy, but long-legged passengers should try to get the front seat -- the front seats are backed by hard plastic. There's plenty of headroom, and the car is surprisingly spacious overall.

View Photo Gallery | 13 Photos
Photo 8/13   |   2010 Kia Soul passenger Side View
On the sensible side, the Soul comes standard with dual front, front-seat-mounted, and full-length side-curtain airbags; TPMS; and front-seat active headrests. ABS with EBD, stability control, and rear disc brakes are standard on all but the base model.
The Soul could change the perception of the company as that of a maker of boring, cheap cars, and could bring in a lot of first-time Kia buyers. Kia's hope is that it can sell 50,000 units a year in North America.
The Soul's style, attitude, and charm come with the economy and value Kia is known for, but for young buyers, this has to be the most appealing car Kia has ever made. We'll soon see if Kia can pull Gen Y away from the Scion and the Fit, as well as the upcoming Cube.