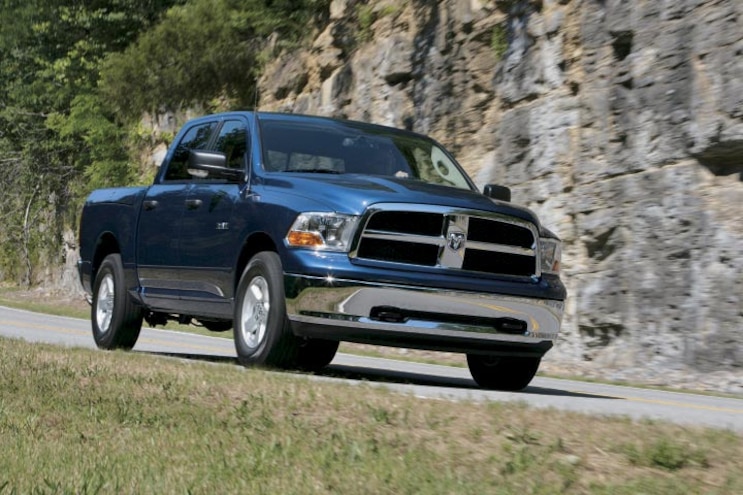 As far as Dodge is concerned, we've reached the point of diminishing returns in making half-ton pickups bigger and increasing load capacities at every redesign. However, that doesn't mean the new Ram isn't ready for hard labor: the 2009 model retains the work capabilities of the previous version. What it does mean is that for this year, the primary focus is on refinement and economy.
The new Ram is not an all-new truck. It remains on the existing 120- and 140-inch wheelbases. In addition, the base 3.7- and recently upgraded 4.7-liter engines and brake system fell into the if-it-ain't-broke category, as did the automatic transmissions; manual gearboxes are gone, so expect a higher base price on V-6 and 4.7-liter V-8 trucks. The forward third of the frame has similar architecture but more high-strength steel for weight reduction, and current front suspension geometry gets aluminum uppers and knuckles that take 10 pounds off each front corner. 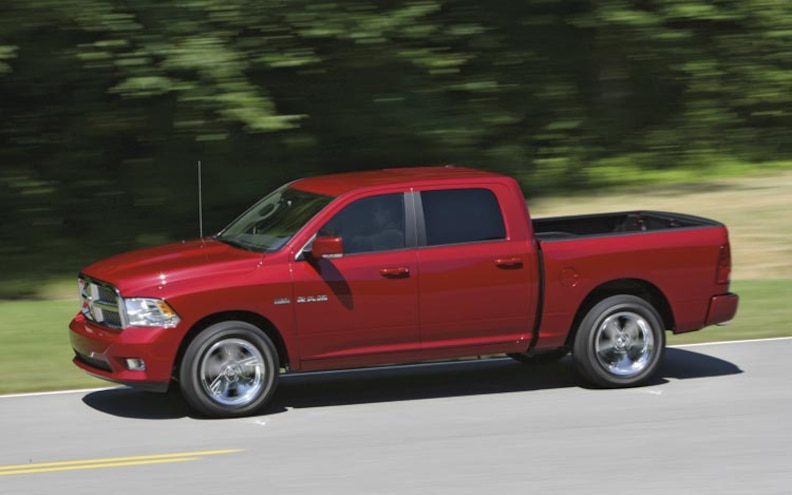 View Photo Gallery | 21 Photos
Photo 2/21   |   2009 Dodge Ram side View
The rear coil/link arrangement knocks off 40 pounds, reduces stiction by 60 percent, and provides 10 inches of travel and better articulation. Every model uses a rear anti-roll bar and the 12 spring rates--up from three--are all linear with a variance only near the attachment points. The 9.75-inch corporate rear axle and 215mm front keep the same differentials, but rear axle tubes are upgraded to 6.5mm wall thickness. Packaging allows three different exhaust systems among the two V-8 engines, and fuel capacity in the optional larger tank is now 32 gallons, a loss of two gallons of space. Standard tank size didn't change.
Variable cam timing has been added to the nose of the Hemi, as have a two-stage intake, almost a point in compression, less-restrictive ports and plumbing, and a wider operating range for the MDS. Peak power is up by 45 horsepower and torque by 32 pound-feet, but the intake and cam timing add 400 rpm to the spread between peaks. In conjunction with the improved aero package, MDS can be used more often, so highway economy is up by four percent--plus or minus one mpg. The EPA's testing may show the same fuel-economy numbers for the 4.7 and 5.7, but trust us, you won't use the Hemi's extra 80 horses and 77 pound-feet for free. 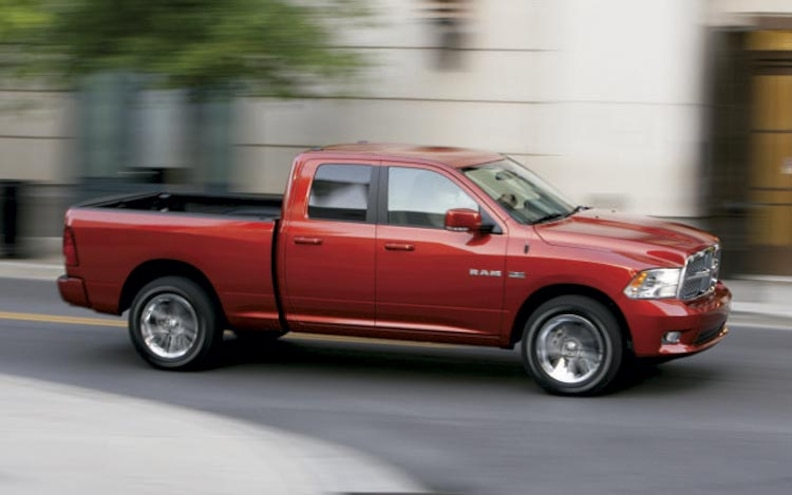 View Photo Gallery | 21 Photos
Photo 3/21   |   2009 Dodge Ram front View
The two-mode hybrid--likely only available in the Quad or Crew Cab since the battery pack goes under the rear seat--and a diesel model are well along in development, but no one's saying if the truck will use a Cummins V-6, V-8, or both. Dodge also is toying with the 545RFE on a V-6 for economy, but the 90-degree V-6 has some resonance issues with the transmission that backs the V-8.
Both 4WD systems are 48/52 nominal torque split, 2.72:1 low, and electrically shifted on the fly; the optional NVG246 has an Auto mode for on-highway all-wheel drive, a feature we didn't get to experience--it didn't rain or show during our test.
Just as with the last Ram, model choices are ST, SLT, Sport/TRX (two- and four-wheel drive), and Laramie, with four-bulb headlamps on higher levels and chrome commensurate with price. Unlike GM's 6.2-liter Crew Cab-only sport truck, Dodge's R/T will have a regular cab and short bed and will include a Hemi, dual exhaust, 4.10:1 gears, 20s, and a tow rating of 5000 pounds. On all Rams, the hood is aluminum, the tailgate torsion bar cuts drop weight in half, and 7/4-pin plugs next to the rear plate are standard.
The 140-inch wheelbase necessitated the new Crew Cab's RamBox, a genuinely box-shaped bed with locking storage along the sides (Dodge claims there are 42 storage places on a Crew Cab). Two-tier loading isn't built in, but the bed divider locks in place to segment it or flips over as a cargo extender while side rails carry securing cleats.
The outboard front seats are new and are a marked improvement as we found the "work truck" ST fabric chairs comfortable and supportive. There is carpet but the door panels are easy-clean plastic, the gear indicators are lights that change color with gear selected, and even the standard sound system generates excellent sonic quality. With the new bed/cab's horizontal seal, it's easy to have conversations with passengers in the rear seats at normal volume at freeway speeds. Tow/haul and ESP with trailer sway control are standard and controlled on the center stack.

View Photo Gallery | 21 Photos
Photo 4/21   |   2009 Dodge Ram row Of All Trims Front View
The topline Laramie gets a center console and added oil and volt gauges, plus a symmetrical dash that frames instrument cluster, radio/climate stack, or side-to-side equally well. There are about five materials and colors in the Laramie cabin, in our eyes placing it between a busy Ford Lariat dash and GM's slick Silverado LTZ arrangement. Ergonomic foibles amount to a wide A-pillar base and bulging hood some shorter drivers might find annoying. Also, the Laramie's fat T-bar shifter has chrome bulges that seem like they would be release buttons, but they aren't--pressing them is merely frustrating. People with smaller hands may find the handle too large and prefer the simple toggle on the column shifter.
Adults should be comfortable in back of the Crew Cab as the rear row's dimensions mirror the front and there's toe room for the outboard riders; the right rear has a drink well under the floor and the subwoofer under the seat. You can get a moonroof and rear entertainment on Crew Cabs and one or the other on Quad Cabs.
With the same weight and more power, Hemis get down the road better than ever and the dual exhaust adds suitable truck burble, though they still feel geared a bit too tall for a truck with two overdrives. Just as impressive, though, was how the V-6 managed--with an empty truck, 3.92:1 axle, and moderately rolling terrain--without the thrashing we usually get from that engine permeating the interior. For local light commercial use, it would be fine, and the lack of aural drama shows all the NVH refinements paid off.
Of course, you also have to credit the lower unsprung mass, stiffer frame, and coil/link rearend, and back-to-back drives empty and loaded suggested less body/frame shudder than any other full-size. The rear end stays better planted and maintains balance to the understeer side, but switching off traction control will allow all the tail-wagging happiness you can throttle up. Poor-traction opportunities were limited but we never got any wheelhop at either end.
Because of the smaller wheelwells and lower profile, a load makes the truck appear it dropped more than it really did. With 1000 pounds and two people--essentially fully loaded--we found plenty of travel remained for bump absorption and stable, confident characteristics that caused the electro-nanny to intervene only once. Steering is less heavily weighted than the Silverado's and responds quickly, almost invariably adding just a hint of body roll so you know change is happening. The Rams' turning circles also are competitive.

View Photo Gallery | 21 Photos
Photo 8/21   |   2009 Dodge Ram rear View
We towed a 6000-pound boat without weight distribution and a 7200-pound travel trailer with weight distribution and the Ram handled the loads well, the increased lateral stability in the coil/link ironing out some of a trailer's tendency to walk the rear end. Tow/haul kept the gearbox where it needed to be and no temperature issues were noted. With a boat, the stock mirrors might be enough; towing a box trailer, you'll need to get some from Mopar or elsewhere as there's no optional tow mirror from the factory.
Off the highway, the coil/link proves advantageous in the fast stuff for ride control--there's no feeling of a huge chunk of metal bouncing around separately behind you, and it has decent flexibility that appeared limited by shock or spring travel and not anti-roll-bar thickness. We found no drag points underneath, though the front end and sides have edges that are undelineated from driving position, which kept us cautious in tight spaces.

View Photo Gallery | 21 Photos
Photo 12/21   |   2009 Dodge Ram dash View
We expect fuel prices will skew the model mix downward and effective payloads higher, yet the Ram still offers all the variety you'd need for any avenue of service.
Why Not Bigger?
Although 40 percent of Ram 1500 buyers chose the Hemi, more than half of them signed up for 20-inch wheels that cost 500-1000 pounds in capacity. That was a good indication the half-ton didn't need to be made bigger, heavier, or less economical, without sacrificing payload or towing capacity.

Truck Trend
Truck Trend
Truck Trend's 2018 Pickup Truck of the Year: Day 4 – Off-Road Trails #PTOTY18
The competition for 2018 Pickup Truck of the Year goes off-road in the mo...
Jered Korfhage – Oct 22, 2017
Truckin
Truckin
This 2000 Dodge Ram is Ahead of the Curve
This ’00 Dodge is one of the first of its kind, it still holds up even now.
Anthony Soos – Sep 12, 2016
Truckin
Truckin
2003 Dodge Ram 1500 - Identity Crisis
Eli Barnes has bought and sold this 2003 Dodge Ram 1500 seven times and every time a little more of ...
Anthony Soos – May 10, 2016
8-Lug
8-Lug
10 Advantages of Manuals: Letters to the Editors
Letters to the Editor: Readers gives their feedback about manual transmissions in pickup trucks, inc...
Monica Gonderman – Jan 23, 2016
Join Our FREE Truck Trend Network Newsletter