Truck Comparison: 2009 Ford vs. Chevy vs. Dodge vs. Nissan vs. GMC vs. Toyota

Fully Loaded and Ready To Go Mano a Mano 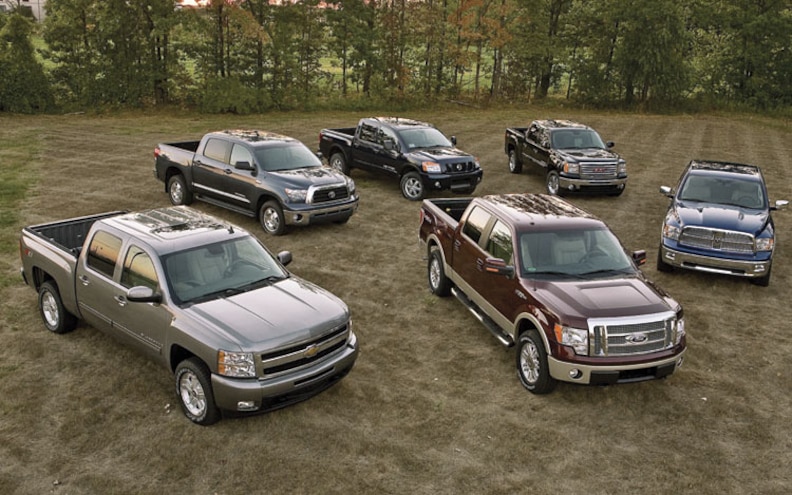 It's not every year you have two major competitors in one of the biggest volume segments come out with a brand-new truck, but it happened this year: F-150 versus Ram. But there are other good vehicles there as well. The half-ton pickup-truck segment has traditionally been the keeper of the top-selling vehicle in the U.S. but that's changed recently. Fuel prices spiked to new highs, and new vehicle sales fell off a cliff as many in-market shoppers wait and watch an unstable economy.
Some are predicting this is the beginning of the end of the full-size segment for SUVs and pickups. Others are saying everything will go back to normal as soon as fuel prices drop. Our guess is it'll likely be somewhere in the middle. There's no question that automakers have to find a new business model. General Motors, Ford, and Chrysler have already made deep cuts and will likely have to think long and hard about combining forces. 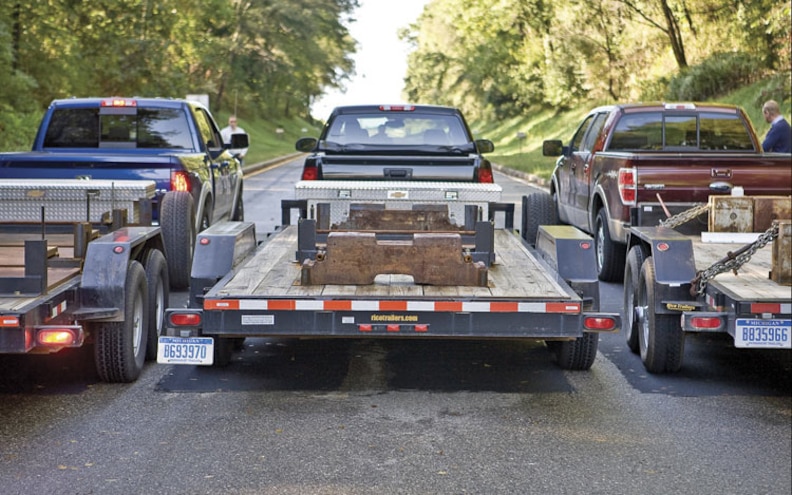 View Photo Gallery | 16 Photos
Photo 2/16   |   half Ton Shoot Out towing Group Photo
The once bulletproof full-size pickup-truck segment is looking much more vulnerable than it did when Toyota decided to invest well over one billion dollars in a new San Antonio truck plant. Ford recently bet the farm on redesigning and improving its number-one-selling vehicle of all time. And Dodge is coming to the ring with a few new tricks that could make or break the company.
We've heard many say this is exactly the wrong time to come to a shrunken marketplace with new product. After all, GM got its new truck out almost three years ago when profits were still high. Even Toyota had a good amount of success with its new full-full-size Tundra. Still, some are quicker than others to make the hard decisions. Nissan recently announced it'll be shutting down its not-so-successful Titan line, in favor of buying some new Dodge Ram over capacity. We'll see how Nissan Titan loyalists feel about having a Hemi. If that alone isn't a clear indication how the world of pickup trucks has changed, we don't know what is. 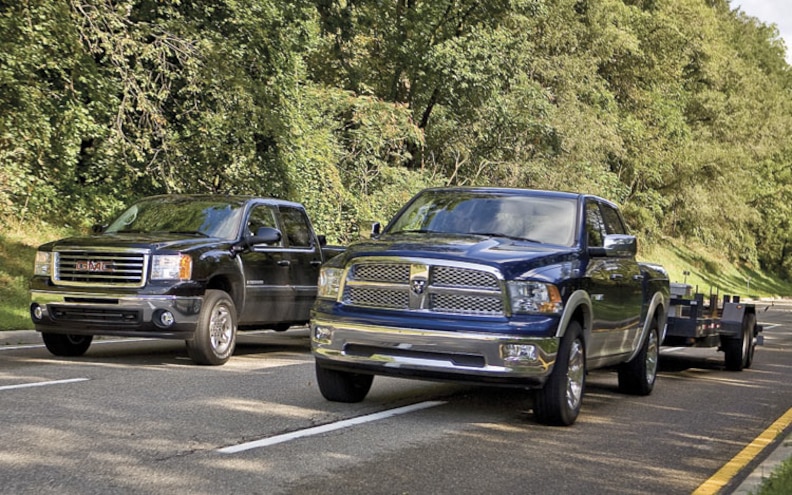 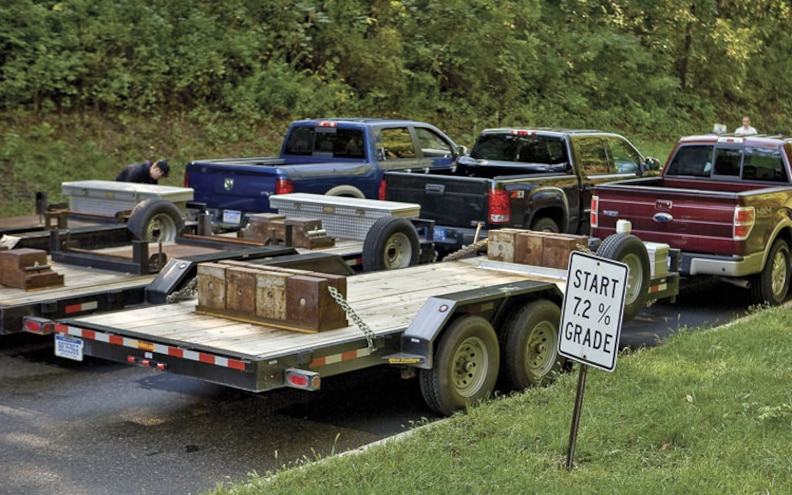 View Photo Gallery | 16 Photos
Photo 7/16   |   half Ton Shoot Out towing Group Photo
And now Ford and Dodge are coming to market with their newest half-ton pickup trucks, and both companies need big successes. As truck guys, this is great for us, whether or not the car media understands it. We'd hate to see what shape either of these companies would be in if they didn't have new pickups getting so much attention. But make no mistake--a slip-up here will not only cost millions, but it will be directly responsible for how much energy and resources can be allocated to future technology and engineering. What sells on the lot today will likely fund what we drive tomorrow.
Complain about full-size pickups all you want, car guys, but without the vehicles that haul, lift, and tow (basically supporting the backbone of the U.S. economy), the necessary research for the cars of tomorrow never happens.
That's why these trucks are so important, and why we wanted to tag along with the guys at www.pickuptrucks.com when we heard they were putting together the ultimate half-ton shootout. It pits the latest and greatest from Ford, Chevrolet, Dodge, GMC, Nissan, and Toyota in head-to-head competition--six crew-cab 4x4s with the largest available V-8 ready for towing. In the interest of full disclosure, Toyota hadn't started production of its 2009 model lineup, so it could send only a 2008 model; however, rather than kick the Toy out on a technicality, we opted to let the vehicle compete. General Motors was kind enough to offer up its Milford Proving Grounds as the field of battle, and we rented nearby Milan Raceway to run the instrumented testing, running the trucks both empty and loaded. Each test vehicle pulled a specially set up trailer weighing 6500 pounds, with a tongue weight of just under 650. Each vehicle had trailer brakes and included the appropriate tow package and lowest available gears (see chart).
The Chevrolet Silverado came in LTZ top-level trim and sported what many agree is the most elegant and well-executed interior of the group. New for this year is the addition of the powerful (the most powerful of the segment) all-aluminum 6.2-liter V-8 and newly revised six-speed transmission. We like this pairing because it gives the truck a strong-pulling first gear as well as an easy-cruising sixth gear for fuel economy. Both GM trucks came standard with 3.42:1 axle gears (the only ratio available with the 6.2-liter). Our Chevy also sported a four-wheel-drive system with 2WD, AWD, 4WD Lock, 4WD Low, and a Neutral setting.

View Photo Gallery | 16 Photos
Photo 8/16   |   half Ton Shoot Out 2009 Ford F150 Front View
The new Dodge Ram still offers the 5.7-liter Hemi, but it now has a revised variable valve timing system and a more aggressive cylinder deactivation mode. An all-new look inside and out is bound to make the Dodge faithful jump for joy. However, many of those loyalists may worry about the big risk engineers took choosing rear coil springs and a Panhard rod to control sway and bounce. Any truck guy will tell you that means less payload and less towing. A more practical feature that could appeal to many truck families is the exclusive RamBox option (two lockable trunks built in the bedsides) available on the new Crew Cab model.
The Ford F-150 is also all-new this year and sports a new interior and exterior look. Ford has, by far, the most configurations available between the three different cabs, three engines, five wheelbases, three beds, and seven unique trim levels. Front and rear suspension setups are similar to previous-gen F-150s, but have been modified. Of note, the rear leaf springs are longer and wider, the steering geometry has been retuned, and there are 11 new wheel combinations. In addition, SuperCrew models have a flatter rear floor, more sound-deadening material, and longer front doors. Ford doesn't offer a V-6, but does have three V-8s: a 248-horsepower, 4.6-liter; a 292-horsepower, 4.6-liter; and a 310-horsepower, 5.4-liter.

View Photo Gallery | 16 Photos
Photo 12/16   |   half Ton Shoot Out 2009 Chevy Front View
Our GMC Sierra came with the topline All Terrain package, which gives it the big 6.2-liter all-aluminum V-8, the six-speed transmission, and a host of upgraded interior mats and materials. Although sharing the same structure and powertrain as the Chevy, GMC offers its own sheetmetal, looking to capture the more upscale buyer. The hood and grille look more muscular, with wheelwell arches and side panels also offering a more bulky and curved style. Although a first for the Chevy brand, the 6.2-liter V-8 was offered in the GMC Sierra Denali last year with the six-speed transmission (as well as in the Cadillac), but only with a permanent AWD system. Now the 6.2-liter GMC is available with the five-position transfer case.
There are no changes for the Nissan Titan for the 2009 model year, but we did get a PRO-4X for the competition, which is Nissan's new-for-last-year off-road package. Ours came in short-wheelbase configuration with custom-tuned Rancho shocks, a rear locking differential, a unique interior seat and stitching package, white-face gauges, bigger wheels and tires, bodycolor trim pieces, and extra skidplating underneath. The Titan's Endurance V-8, although listed as having just 318 horses, has been known as a strong puller and hauler from its introduction. As to its exterior styling, mixed reviews best describe the unique and polarizing look.
A brand-new entry last year, the much anticipated Toyota Tundra won Motor Trend's 2008 Truck of the Year title with relative ease and, as noted earlier, the model here is not a 2009. The Tundra has a fully boxed frame with a high-tech, all-aluminum, 32-valve, variable valve-timed 5.7-liter V-8 that makes over 400 pound-feet of torque. Across the lineup, it offers three engine choices (one V-6 and two V-8s), three wheelbases, three cab configurations, three bed lengths, and three trim levels. Our Tundra came loaded in SR5 trim with the CrewMax cab and equipped with one of the best nav systems around. The truck is the largest of our set and, by the numbers, slots in between a half-ton and 3/4-ton truck.

View Photo Gallery | 16 Photos
Photo 13/16   |   half Ton Shoot Out 2009 Dodge Rm Front View
Our tests were set up specifically to allow each pickup truck to show off its strengths. Of course, that also meant they weren't going to be allowed to hide their weaknesses. We started with objective testing by running each competitor at Milan Raceway in Michigan to get, among other things, 0-to-60 times with and without our 6500-pound test trailer in tow. After a day at the track, we spent a day with each truck navigating our fuel-economy runs, which included half the loop empty and half the loop with our trailer. The next day we headed out to the General Motors Proving Grounds, where we raced each pickup up a seven-percent grade, also with trailers. Then we set up a short autocross course to determine how these vehicles handle when pushed like sport sedans. Later, we conducted what we called the Squat Test, to determine how much spring deformation occurs when adding 650 pounds of tongue weight to each bumper. And finally, we conducted our subjective part of the testing, where we looked at interior and exterior fit and finish, observed design and pickup styling decisions, and overall quality. In addition to this final test, we attempted to quantify each vehicle's perceived ride quality with our own personal "butt dynos."
We've charted all our results for your perusal and selected a winner, rating each category equally. Of course, you may have a different set of priorities, in which case we hope you use the data we've collected and make your own best choice.
For us, the Chevy Silverado was the best overall choice, balancing power, performance, value, and quality. Was it perfect? Absolutely not. We have to admit it came down to the Chevy and Ford (Dodge will be a strong player this year as well), and maybe the home field gave the Silverado the slight advantage, but with a strong powertrain story and a top-notch interior layout (not to mention a pretty good price advantage), our pick by a nose (and a very small nose at that) is the Chevy Silverado LTZ.
FIGHT CLUB WINNER:Chevrolet Silverado
Check out www.pickuptrucks.com for more full facts and figures from this years Half-ton shoot out!
To Get More
We partnered up with our friends at www.pickuptrucks.com to help out and watch this classic half-ton confrontation. But does that mean its final judgment will be the same as ours? Not necessarily. We picked out a few specific tests a third-party company performed and pulled out a few of our own. There were other tests performed and more data collected than we have the space to publish here. To see the rest in thorough detail and for more information and data, go to www.pickuptrucks.com and find out exactly how each test was structured and laid out, and who their winner turns out to be.