The Evo of Crossovers 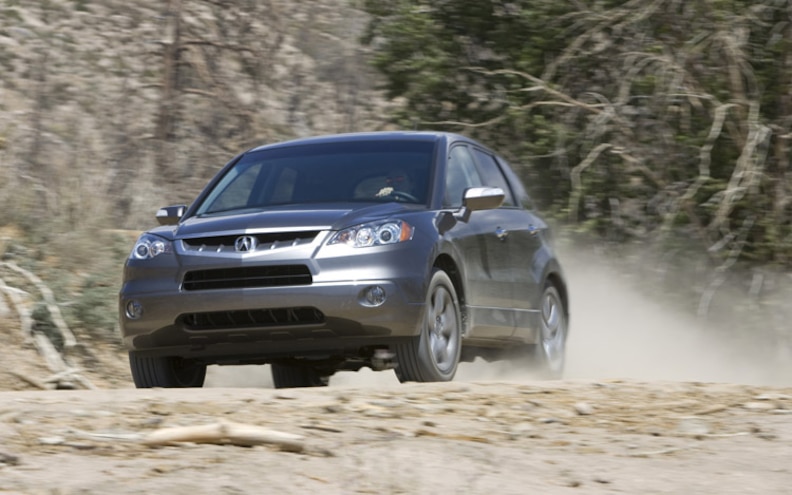 Generally, our staff is likeminded to the point that we hardly ever view one vehicle in two entirely different lights. Sure, we'll disagree on a car's nuances, its levels of significance, superiority, or value, but rarely do we take opposite sides. Yet, there are instances when a vehicle proves as polarizing as a pair of Vuarnets.
Take our long-term Acura RDX, whose stiffly sprung suspension and edgy turbo engine had the team reminiscing about our love/hate relationship with the long-term 2006 Mitsubishi Lancer Evolution MR SE. As with the rigid and raucous Evo, some staffers adored the RDX's quick reflexes and force-fed power, while others came away sick and tired of its harsh ride and noticeable turbo lag. Styling? Several found the RDX's sheetmetal to be cute, handsome, or chic; others saw it as ho-hum and indistinct. Interior? Half were giddy with the cargo capacity, gadgets galore, and overall comfort; the other half frustrated with the large rotary-knob interface, "too techy" appearance, and busy center stack. 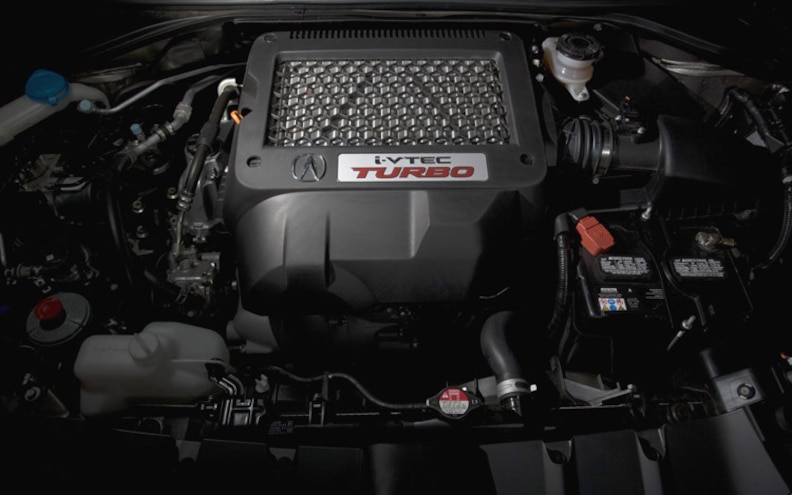 View Photo Gallery | 7 Photos
Photo 2/7   |   2007 Acura RDX engine
Still, despite its controversies, the RDX found plenty of willing takers. Just look at the trusty odometer, which, at nearly 28,000 miles, is proof positive that the RDX rarely held sleepovers in our parking lot. In fact, not only did the RDX accrue more mileage than two previous (and, with three rows, more accommodating) SUVs-the Mercedes-Benz GL450 (25,771) and the Audi Q7 4.2 (22,223)-but it also amassed the most love from our video team, who signed it out whenever action called. 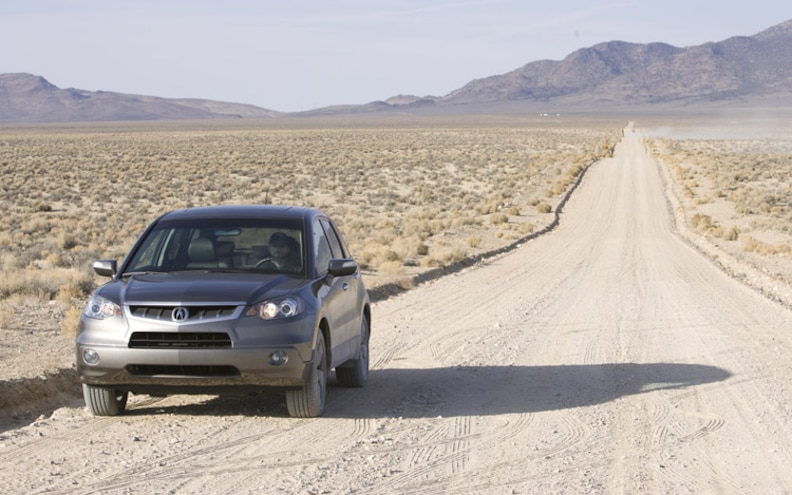 View Photo Gallery | 7 Photos
Photo 3/7   |   2007 Acura RDX front View
Given the RDX doesn't offer a video player, what else about it could have possibly enamored our videophiles? The reasons were numerous-and the same ones that made it a winner of two comparison tests. It is small on the outside, so navigating tight or tricky spots was relatively easy for our staff, certainly with the backup camera that came with our tester's Technology Package. Further, that smallness, along with the peppy turbo engine, sure-footed "super handling" all-wheel-drive system, and sport-tuned suspension, helped make it feel compact, agile, and fun. For camera crewmen Jim Gleason and Mike Suggett, that always meant being able to keep up safely with a comparison-test squad on a twisty road, where editors, even behind the wheels of sport sedans, could never lose the Acura, which delivers 0.82 g of lateral grip and 0 to 60 mph in 7.0 seconds flat. Moreover, the RDX, with 60.6 cubic feet of cargo space, rear seats down (27.8 cu ft up), was easily able to swallow gobs of gear, namely multiple video cameras, bounce boards, rigs, and tripods. And, lest we forget, the RDX's capacious and tech-laden cockpit, boasting satellite radio, navigation, Bluetooth, an auxiliary jack for iPods, dual-zone automatic climate control, a 10-speaker surround-sound audio system, and center console that can conceal a 17-inch laptop, proved the ideal mobile office, locker, and entertainment room. 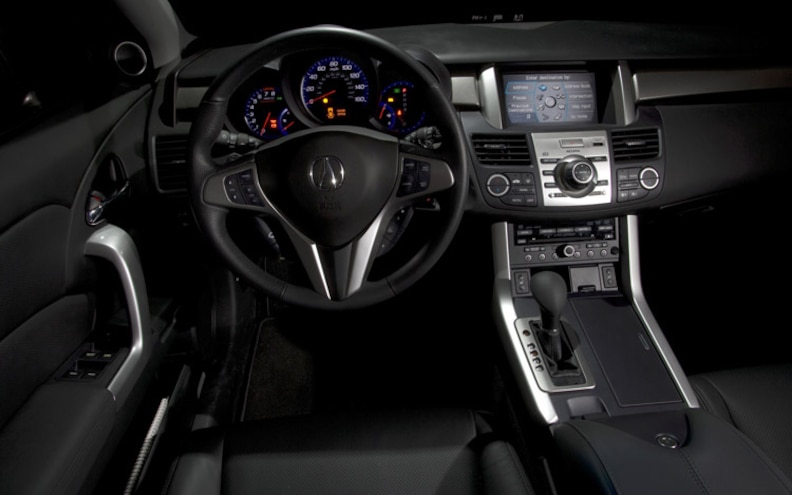 View Photo Gallery | 7 Photos
Photo 4/7   |   2007 Acura RDX interior View
Of course, the RDX deserves additional compliments for its responsive paddle shifters, a cavernous back seat, communicative steering and brakes, and 12 months of no problems or glitches. But it warrants a few extra criticisms, as well. For instance, many felt the 2.3-liter turbo drank too much premium gas, defeating the fuel-sipping advantages of a small-displacement four-cylinder engine. Indeed, at 17.7 mpg, our observed fuel economy in the RDX was no better than that of our I-6-powered long-term BMW X3. This, naturally, begs the question: Given no real apparent fuel-economy advantage, would Acura have been better off using the TL's silky-smooth naturally aspirated 3.2-liter V-6 instead of the bungee-cord powerband turbo four?
Several editors also thought the RDX's $37,165 price tag, even including the feature-rich Technology Package, was too steep, certainly considering it lacked such simple premium bits as automatic headlamps and hood struts. And while the RDX's normal-wear tally for one year and 27,914 miles cost us not a dime, its maintenance total-$692.52 for four oil changes, tire rotations, and full inspections, and one rear axle-fluid change-was more than that of our long-term full-size GMC Yukon, which ran us $484.72, albeit for 20,076 miles of service.
Now that the RDX is gone, many on the team feel its absence, mostly for the rally-car charm, unbeatable reliability, and small-on-the-outside/big-on-the-inside proportions. Others, however, have bid adieu with nary an ounce of melancholy. Perhaps they just need some new Vuarnets.
From The Logbook
"I do appreciate a distinctive automobile on its own merits, and if I'm spending this much on a vehicle, I'd at least like it to look good sitting in my garage. Not once have I ever given the RDX 'the look back' as I'm walking away from its parking spot."
- Rory Jurnecka
"If I'm going to have to drive a sport/ute, I'd rather it be something like the RDX, a vehicle that you can easily maneuver, has a sporty appearance and attitude, and drives much more like a car."
- Mike Floyd
"It's obviously significant that Acura has put a turbo on one of its four-cylinders, but I'm not convinced it was the right way to go by putting it in this inherently heavy SUV rather than one of its sedans."
- Brian Vance
"This would be the perfect CUV for people who love sports cars."
- Melissa Spiering