The Other Celebrity Hybrid? 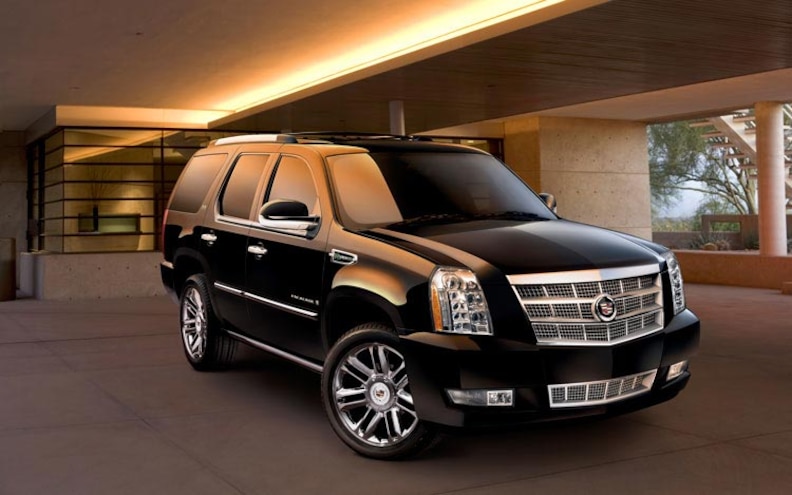 This is the automotive poster child for damned-if-you-do, damned-if-you-don't. No, it's not a Toyota Prius. It's not a $40,000 Chevrolet Volt, either, a car the Treasury department's automotive task force figures will cost all sorts of money General Motors can't afford to lose in the coming years. It's the model critics point to as the General's cynical, too-little too-late response to the hybrid movement.
From day one, which is to say, mid-1998 as a 1999 model, the 'Slade has been a huge moneymaker for GM. Profit margin always has been higher than the sticker on a base Cobalt. That hasn't changed, even as sales slid to 35,000 units, counting both standard and Suburban-size ESV, plus some 4700 EXT pickups. It remains the official fleet vehicle for the National Football League, the National Basketball Association (everyone on the L.A. Lakers, including the coaching team, got one the last time that team won the championship) and hip-hop music. 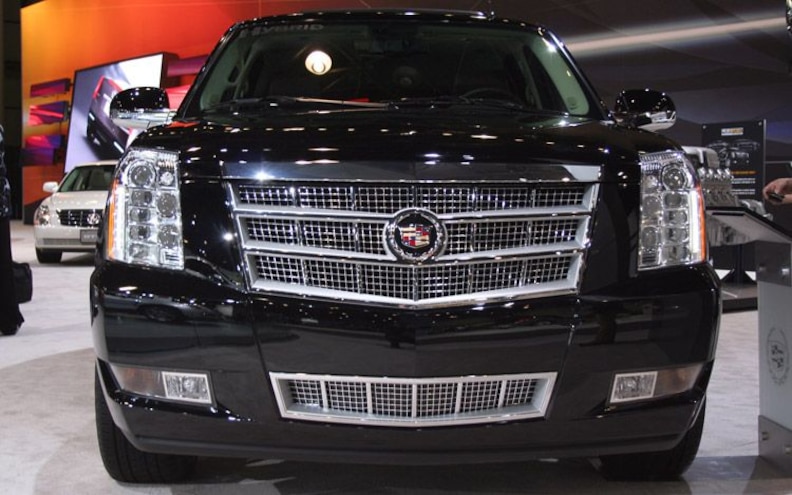 View Photo Gallery | 6 Photos
Photo 2/6   |   2009 Cadillac Escalade Platinum Hybrid front
I happened upon an MTV show recently about some big music event. A female voiceover surveyed the stars and their rides arriving on the scene: "Escalade, Escalade, white sports car ..." The driver of the sports car was one of the big hip-hop stars of our day, and the white sports car was an Audi R8.
If all those NFL, NBA, and hip-hop stars are going to continue to drive Escalades, now they can cut down on import oil dependency and CO2 emissions with a 20-mpg Escalade Hybrid. What says, "I could drive an R8, but I need room for my posse" more than the $85,000+ Platinum Hybrid? 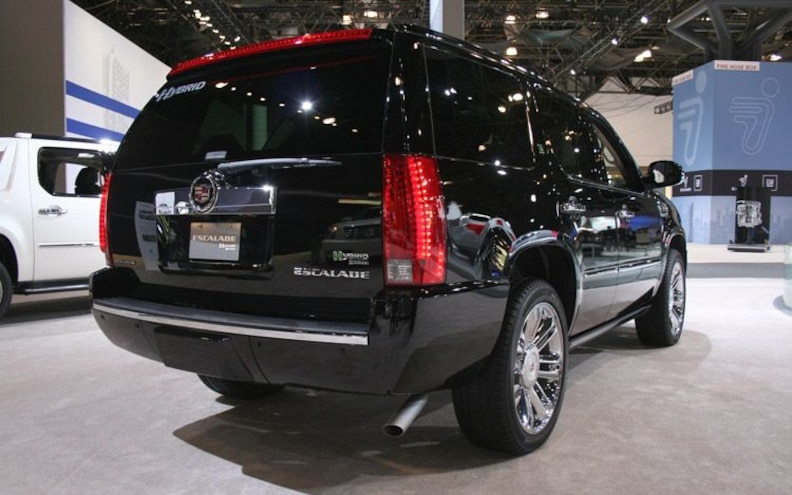 View Photo Gallery | 6 Photos
Photo 3/6   |   2009 Cadillac Escalade Platinum Hybrid rear Three Quarter
The hybrid forgoes the Escalade's 6.2L V-8 for the 6.0L hooked up to hybrid motors, as in the Chevy Tahoe/Silverado and GMC Yukon/Sierra hybrids, and shares the Chevys' four-wheel-drive system in place of the Caddy's AWD system. Combined, the V-8 engine/electric motors make 332 hp and 367 lb-ft, "enough to produce serious scoot even in a four-wheel-drive 'ute that's so grossly weighty the EPA crosses its arms and refuses to test it," Frank Markus writes. The rear-drive model, he notes, limbos under the 6000 gross-vehicle-weight rating cutoff for a 20/21-mpg EPA rating. "Applying the same economy differential to the lighter Tahoe/Yukon Hybrids, we'd expect the 4WD Caddy to earn a rating of 19 mpg city/19 mpg highway."
While I drove it like an SUV, and hardly noticed the instrument panel reading hovering about 20 mpg-observed, Markus worked hard to run on electric-only and could coax no more than 5 mph in run-silent, run-deep mode, with just the driver aboard. It's not the most seamless hybrid extant. We both find the acceleration curve and especially the braking response to pedal travel to be non-linear, issues others have engineered out. Markus dislikes the efficiency meter, centered on the gauge cluster. When the SUV is switched off, it sticks straight up. Idling in neutral, accelerating or braking very, very, very efficiently (as is the tech director's habit in hybrids), it's still straight up. Mildly intemperate braking or acceleration wiggles it a bit left or right. To really move the needle, you have to floor it or nail the brakes. Folks who pay all that money for a hybrid want more than a big decal above the rocker panels or on the rear window; they want a hybrid's gauge to dance into the green when they do well, not just wag a finger at them when they drive it hard.

View Photo Gallery | 6 Photos
Photo 4/6   |   2009 Cadillac Escalade Platinum Hybrid rear
Still, the Escalade Hybrid 4WD, the only Escalade with a low range, is easily a match for its prime competitors, offering nearly the off-road capability of the Lexus LX 570 and Land Rover Range Rover HSE 4WDs and nearly the towing and space of the Mercedes-Benz GL550 without hovering near gas guzzler tax fuel efficiency. For an extra $11,750 (hybrid or not) the Platinum package offers all of what we used to call "bling" without venturing into crass tastelessness. "The wood inlay worthy of a Louis XIV armoire and French-stitched leather everywhere make this the best-finished cabin in an SUV as far as I'm concerned," Markus writes.

View Photo Gallery | 6 Photos
Photo 5/6   |   2009 Cadillac Escalade Platinum Hybrid front
The futuristic LED headlamps make the base Escalade's HIDs seem dim as halogens. The distinctive vertical lamps will become as much a signature for Cadillac as the "halos" are on BMW headlamps. And that's easier for MTV stars to recognize when a Caddy pulls up to an after-hours club. In today's economy, the Lexus, the Range Rover, even the Benz GL as well as the Escalade all are over the top. If you're going to go there, the Cadillac's quality and luxury is unsurpassed. If you're an NFL, NBA, or hip-hop star working on your image and you simply have to have one, you're damned if you don't choose the 19-20-mpg hybrid version.