For a Few (Thousand) Dollars More, V-8 Power in a Chevrolet Colorado 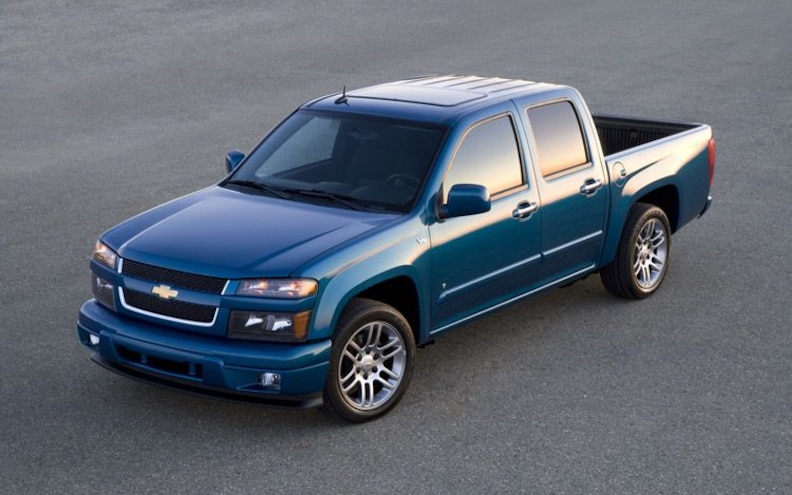 These days, there aren't many compact trucks for those with a lead foot. Yes, the Dodge Dakota is available with a V-8, but it's a lot bigger than a true compact truck-it's somewhere between a compact and a midsize. There are some high-performance dealer-installed or specialty options (such as adding a supercharger), but for red-blooded American compact-truck performance, there's really only one choice: the Chevrolet Colorado V-8. And the notion of dropping a V-8 in a compact truck is truly appealing on paper -- big power in a small vehicle is always tempting -- even if the reality isn't quite what we'd hoped.
The Good
While a basic Colorado comes with a choice of a 2.9L I-4 or 3.7L I-5, GM has made V-8 power available in its smallest pickup, providing a truly tantalizing weight-to-power ratio. In this case, it's 13.6 lb/hp, which is nearly as good as that of an Acura TL or John Cooper Works Mini Clubman. The truck we tested, a two-wheel-drive crew cab, weighs 4073 lb as equipped and uses a 300-hp, 320-lb-ft version of the company's 5.3L V-8 backed by a Hydra-Matic 4L60 four-speed auto (that same engine puts out 320 hp in the Tahoe).
That V-8 offers nearly 60 more horsepower than the I-5 and 115 more horses than the I-4. This Colorado also uses GM's ZQ8 suspension, which had been offered in prior model years and returns retuned for 2009. It allows the truck to ride an inch lower than with the regular Z85 suspension. The ZQ8 suspension is included in the $3935 3LT package, which includes the V-8, 18-in. six-spoke wheels and 235/50 Goodyear Eagle RS-As, body-color bumpers and grille, and unique seats. 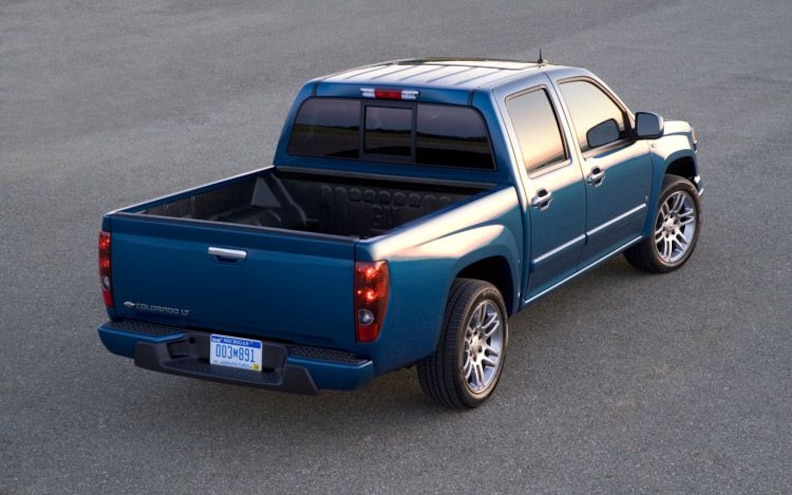 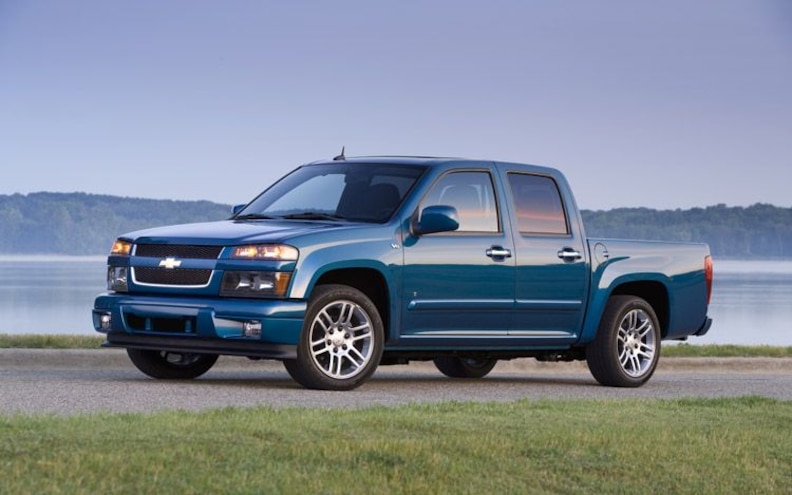 View Photo Gallery | 10 Photos
Photo 3/10   |   2009 Chevrolet Colorado V 8 front Three Quarter
On the road, the lowered Colorado feels much like a car. Ride height is closer to that of a sedan than of a half-ton pickup, as is the low 16.6-in. step-in height. If its inherently American growl doesn't catch your attention at startup, the V-8 will make its presence known the second you merge into traffic. Getting to speed isn't just quick -- it's fun.
You'll find excuses to floor it ("oh, that Mazda may look like it's a mile away, but that car has some power. It could close that gap. Better drop the hammer just to be sure") and will love the effortless flow of power. It handles better than a typical truck, too, making it easy to forget that with all of this carlike entertainment also comes a 1250-lb payload capacity and 6000-lb towing capacity.

View Photo Gallery | 10 Photos
Photo 4/10   |   2009 Chevrolet Colorado V 8 front Three Quarter
No surprise, it also performed quite well at the track, reaching 60 mph in 6.9 sec, finishing the quarter mile in 15.2 sec at 90.6 mph, and providing an impressive 3.8-sec time when accelerating from 45 to 65 mph. For reference, a 4WD 3.5L (first-gen I-5) Colorado we tested took 9.6 sec to get to 60 and completed the quarter mile in 16.7 at 82.6 mph. The specially tuned suspension also improved things in the Motor Trend figure eight, where the Colorado's numbers went from 30.3 sec at 0.51 g to 27.7 sec at 0.61 g, which is Mazda3 and Acura TSX territory. The Colorado also excelled when stopping from 60.
For 2009, all Colorados benefit from braking upgrades, including four-channel ABS with yaw control, and this new truck shaved 27 ft off the previous 3.5L's 153-ft stopping distance. We know that isn't a completely fair comparison, as they aren't identically equipped, but you still get the basic idea that there has been a significant improvement.

View Photo Gallery | 10 Photos
Photo 5/10   |   2009 Chevrolet Colorado V 8 front
The Bad
Here's the biggest problem: the price. As tested, the truck cost $30,475, which puts it deep into Silverado territory (you can get a 2WD extended cab Silverado work truck for $27,455 with the 5.3L and a 2WD 5.3-liter extended cab LT for $30,525-and those prices don't include rebates from Chevrolet, which totaled $5000 for the Silverado and $1000 for the Colorado on the day I looked). The Silverado won't provide the same acceleration (we got 8.2 sec out of a 4WD Silverado; that's another unfair comparison, but again, you get the idea), but offers a lot more capability.
The Colorado itself starts out at $17,430 for the regular cab work truck, but there are body style and trim level requirements to get the V-8-for example, you can't get the ultimate hot-rodder's configuration: regular cab, short bed, manual transmission. Getting the V-8 actually costs more than we hoped -- you can't just add the 3LT package to the base Colorado, and you have to get the 3LT to get the V-8.

View Photo Gallery | 10 Photos
Photo 6/10   |   2009 Chevrolet Colorado V 8 interior
The Ugly
Many people think that as far as styling is concerned, the Colorado was a step in the wrong direction as a follow-up to the S-10. The Colorado uses big truck cues -- big fender flares, chunky grille -- on a small platform, and they don't quite work.
Also, while the 3LT interior receives comfortable, supportive leather bucket seats and an auto-dimming rearview mirror, the rest of the cabin is essentially the same as it was when the truck first came out six years ago. It has the same hard black and gray plastics, the same stereo, the same steering wheel, and neither nav nor an MP3 player/iPod interface. This last item is a minor thing, but when you're spending $30K on a compact truck, you'd hope it would be included.

View Photo Gallery | 10 Photos
Photo 9/10   |   2009 Chevrolet Colorado V 8 rear Seats One Folded
This truck really is a street rod, and there aren't many of those in the compact-pickup world right now. The lower suspension and two rows of seats give you the cabin volume and ride height of a small car, yet you can use it to tow when it's time for work duty. If you crave carlike speed but only need to carry small loads around, the Colorado V-8 may be just what you're looking for. We just wish this package were less expensive.