Stuck Between a Sedan and a Sport / Utility? Try on a Two-Row Crossover. 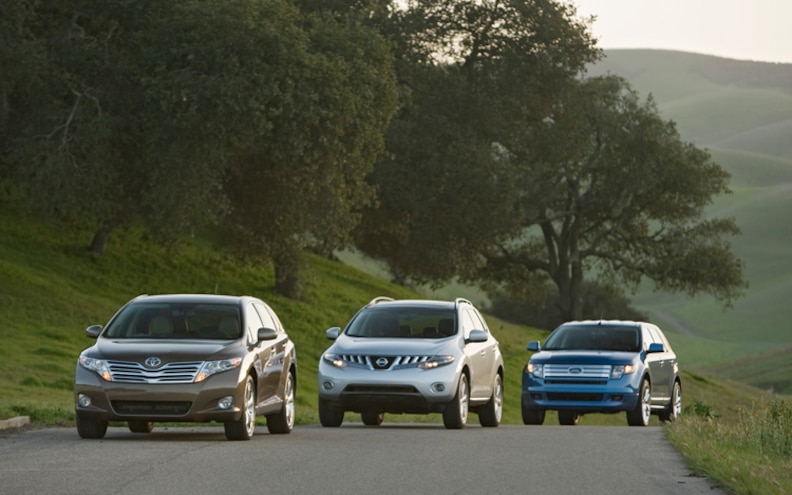 Most days a common, boring, good ol' four-door sedan makes all the sense in the world. It can comfortably swallow a nuclear family, even Lassie and Garfield, as well as a week's worth of groceries or travel bags. It is easy to step into or hop out of, offers a nestled-to-the-pavement driving feel, and swigs fuel at a more miserly rate than a big sport/ute. Yet, some days, when a stroller won't squeeze into the trunk or the old kitchen table needs hauling away to Goodwill or the family is itching for a weeklong camping trip, it's the huge, gas-guzzling sport/ute -- not the frugal, frustrating sedan -- that seems the ideal transporter. And, let's face it: It's days like those that convince a majority of SUV-buying Americans a hulking rig is not only preferred but also absolutely necessary, even for everyday use. But is it really? Isn't there a compromise or, rather, a crossover? A vehicle that bridges the divide-something that drives, handles, and sips like a sedan yet totes passengers and cargo like an SUV?
Indeed, there is, and we've assembled three of the latest and greatest -- the Ford Edge Sport, the Nissan Murano SL, and the Toyota Venza -- to determine which is the ultimate compromise. Each is a car-based, two-row crossover offering athletic moves, peppy front-drive V-6 powertrains, combined fuel economy of at least 19 mpg, and substantially more interior volume than your average family sedan. 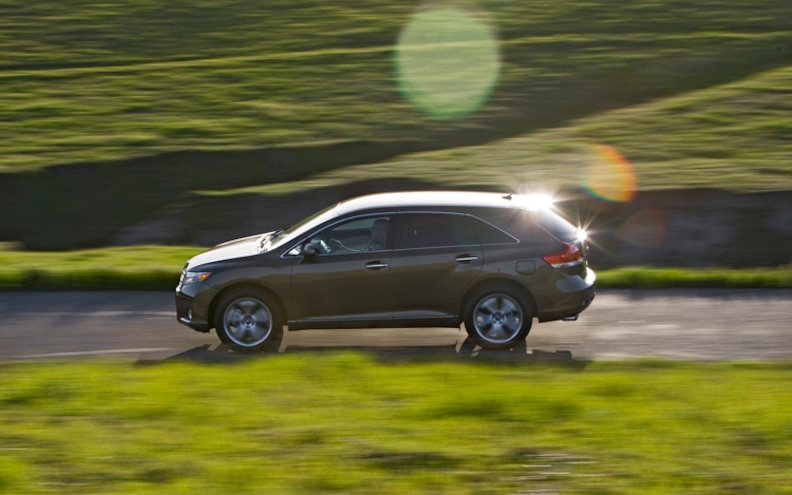 View Photo Gallery | 29 Photos
Photo 5/29   |   2009 Toyota Venza V6 driver Side Rolling View
For 2009, the new-in-2007 Edge inherits a $35,530 Sport trim, which features a monochromatic eight-piece body kit and, most notable (make that noticeable), 22-inch forged and polished wheels. Our tester, fitted with a $385 audiophile package and the double-deuces, appeared aggressive, a bit menacing, and, well, almost toylike -- a giant, plastic box and a "Hot Wheels" banner could've made it a centerpiece at FAO Schwarz. Given its '09 debut, this $35,915 Sport was the Edge Ford had in its L.A. fleet, so we were happy to see if the modern duds as well as the sport-tuned suspension would engage us more than had previous Edges. 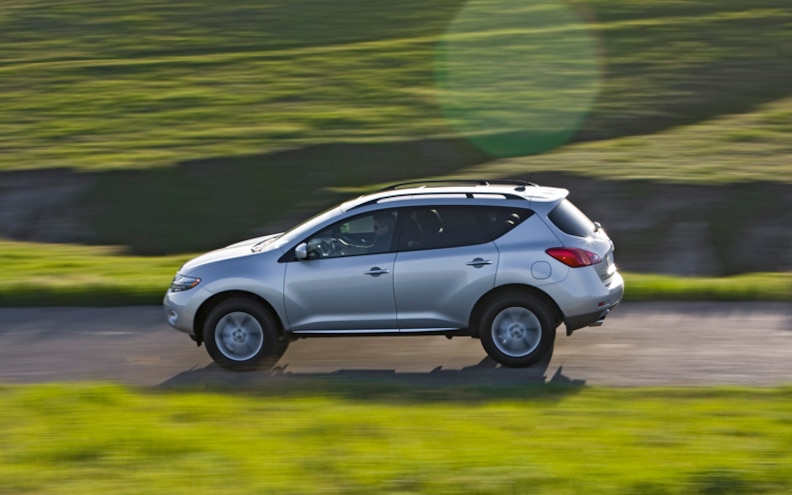 View Photo Gallery | 29 Photos
Photo 6/29   |   2009 Nissan Murano Sl driver Side Rolling View
Nissan's Murano, just reintroduced for the 2009 model year, entered this competition with flamboyant fresh styling, a renowned VQ-series V-6, and, as we learned in our 2009 Sport/Utility of the Year testing, a well-sorted chassis. Our $30,010 SL tester, loaded with a $1170 dual-panel sunroof and $4500 worth of packages, all of which included, among other items, a backup camera, Bose audio, Xenon headlamps, Bluetooth, power liftgate, and leather, came in at $35,805. 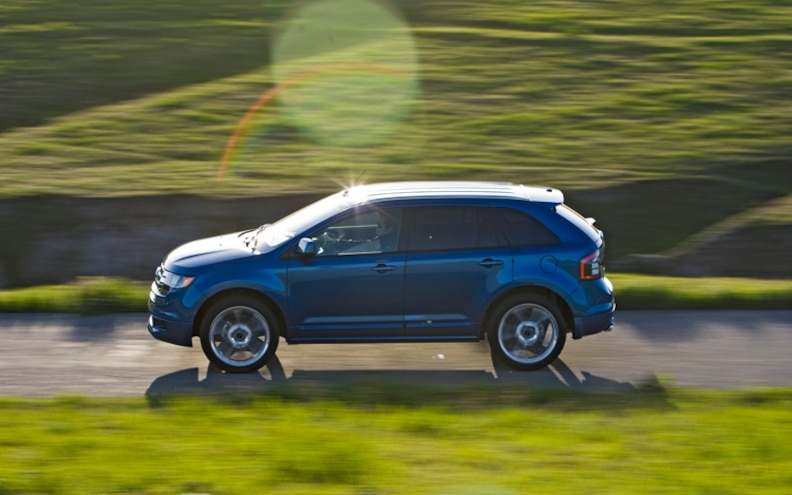 View Photo Gallery | 29 Photos
Photo 7/29   |   2009 Ford Edge Sport driver Side Rolling View
Of particular note is the Toyota. If you recall, the Venza was not part of our 2009 Sport/Utility of the Year field. Toyota, you see, is marketing the Venza as a car. So the thought of it caravanning down dirt roads with a slew of other SUVs, kicking up dust clouds as if it were a Land Cruiser, was not a desirable scenario. Why? Well, just imagine had it triumphed..."The Venza: a car so not-a-car it won Motor Trend's Sport/Utility of the Year." Maybe it's just us, but we can't imagine that was a tagline Toyota was clamoring to advertise. Naturally, Toyota declined our invitation. Yet, you may also recall the Venza did not play in our 2009 Car of the Year contest. But wait, isn't Toyota calling it a car? Yes. But we, you see, view the Venza as a crossover, given its available all-wheel drive, Honda Pilot-beating 8.1 inches of ground clearance, Volkswagen Tiguan-conquering 3500-pound towing capacity, and Porsche Cayenne-embarrassing 34.4-cubic-foot cargo hold. A car? Only if the Tundra were an open-trunk utility sedan.
For this shindig, Toyota sent us a $28,520 Venza V-6 equipped with the $4345 premium package 2 (leather, Xenon headlamps, smart key, power tailgate, backup camera) and a $1090 13-speaker JBL audio upgrade, bringing the bottom line up to $33,955.

View Photo Gallery | 29 Photos
Photo 11/29   |   2009 Toyota Venza V6 cockpit View
Out traversing the beautiful country roads winding their way through Santa Ynez and on the ranch property that was once home to Kiefer Sutherland -- "Imagine the parties that went on here," ponders editor at large Arthur St. Antoine -- we familiarize ourselves with the three crossovers, quickly taking to the shape and style of the Edge. St. Antoine notes, "I find the Edge far and away the best-looking vehicle in this group. Nice proportions, clean lines, aggressive stance." We like the appearance of the Murano, too, but more in a "that's interesting" rather than "that's gorgeous" kind of way. "Has an HR Giger look about it, with its fanged chrome grille and insectoid triple-beam projector lights," observes senior editor Ed Loh. Interestingly, the low-slung, elongated styling of the Venza elicits not one quote. Love the look? Hate it? Crickets.
Inside, though, the Venza receives rave reviews. "I appreciate the silkiness of the audio controls and the clever center console, which easily adapts to multiple configurations and neatly clasps an iPhone," opines St. Antoine. Loh notes, "Best interior of the group. Classier surfaces than Murano and Edge. Weird placement of some wood elements, but at least you get the sense Toyota's design department is trying." While we generally like the cabins in the Edge and Murano, both are deemed either too dark, too frustrating, or too techy in light of the cheery and simpler Venza's. In addition, the Toyota's quarters boast the most comfortable second row, the easiest ingress and egress, and the largest cargo area, whether the seat is up or down.
Over our 35-mile road loop, much of which presents pockmarked and undulating pavement, the Murano, with its light, communicative steering and taut-yet-forgiving suspension, manages to soak up the worst of bumps while still delivering quick reflexes and confidence-inspiring agility. "The athlete of the bunch," says St. Antoine. "Feels light on its feet, steering is nicely weighted and accurate, and balance and grip are quite good." The CVT, further, keeps the 265 horses on a tight rein, never missing a step, whether exiting a tight turn or passing big-rigs on the highway.
Although it's not quite as fun or sharp as the Murano, the Venza impresses us as the one that could get up and over the hills the quickest, thanks to its heady 3.5-liter, 268-horse V-6, intuitive six-speed slushbox, and grippy Michelins. It posts the briskest 0-to-60 and quarter-mile times -- 6.5 seconds and 15.0 at 93.7 mph, respectively, not only putting the Edge and Murano on the trailer but also the Hyundai Genesis Coupe 2.0T Track -- as well as a carlike 0.81 g on the skidpad. "Exceptionally smooth transmission and burly engine. Put your foot in it, and you're treated to instantaneous and delicious acceleration," says Loh. That said, the steering feels a tad numb, the 20-inch wheels degrade an otherwise pleasing ride, and the suspension "wallows and porpoises" when really pushed, according to St. Antoine. The Edge, in comparison, comes across as athletic but heavier and less refined than the Nissan and Toyota.

View Photo Gallery | 29 Photos
Photo 18/29   |   2009 Nissan Murano Sl cockpit View
Peruse the curb weights -- 4229 pounds for the Ford, 4023 for the Nissan, and 3911 for the Toyota -- and those sensations aren't surprising. Moreover, the Edge's 3.5-liter seems the wheeziest near redline and most overburdened under aggressive acceleration. Making things worse are the showy wheels and tires, which add objectionable unsprung weight, dulling turn-in and stiffening the ride to the point we were begging for an SEL with 18s. "Ford's execs should flagellate the fleet manager who equipped our test vehicle with these 22s. Was it to wow the SEMA crowd?" wonders St. Antoine. Nonetheless, the Edge's heroic alloys and float-tube Pirellis do provide the largest contact patches, helping deliver the shortest 60-to-0 braking (123 feet) and stickiest lateral acceleration (0.83 g). Too little, too late, though.
"It's impossible to overlook the Toyota's virtues: fleet of foot, polished, roomy, well-crafted, fuel-efficient, attractively priced," says St. Antoine. Loh expresses similar sentiments: "Though I like the Edge's styling and prefer the Murano's drive, the Toyota simply can't be beat by virtue of the three Ps-packaging, performance, and price. " Not only is the Venza the least expensive of the group-and not because of a deficiency in equipment-it is also the most fuel efficient (22 mpg EPA combined, 19.8 mpg observed), the quickest, and the most commodious. No matter how it's viewed -- car or crossover -- the Venza is a winner. Winner of this test and winner of our 2009 Sport/Utility of the...oh, darn it, strike that.

View Photo Gallery | 29 Photos
Photo 25/29   |   2009 Ford Edge Sport cockpit View
1ST PLACE: TOYOTA VENZA
The most carlike crossover here, the Venza doesn't sacrifice sport or utility.
2ND PLACE: NISSAN MURANO SL
An eye-catching, fun-to-drive rig that can't match the winner's quickness or value.
3RD PLACE: FORD EDGE SPORT
Gargantuan wheels and hefty curb weight spoil an otherwise fresh offering.
MINUS TWO
Four-cylinder Venza represents less dough and go but more MPG
At $26,695 to start, the four-cylinder, front-drive Venza costs $1825 less than its V-6 sibling. Yet, in this case, fewer greenbacks means more miles per gallon -- 21/29 versus 19/26. But it's slow, right? Well, slower, but by no means a slug. With an all-new 2.7-liter engine producing 182 horses and 182 pound-feet, our all-wheel-drive tester, which dented the dirt with a rather hefty 3942 pounds (31 more than the FWD V-6), needed 9.1 ticks to hit 60 and 16.9 at 82.2 mph to nab the quarter. That's well behind the speed freak V-6, but well ahead of a Honda CR-V or a Subaru Forester 2.5X. Plus, in front-drive guise, the four-cylinder Venza would weigh in closer to 3700 pounds, probably dropping a couple tenths from those times. For routine, everyday motoring, the 2.7 is perfectly adequate and, given its friendlier cost of entry and subsequent fuel savings, is arguably the wiser purchase compared with the 3.5.

Vital stats:
0-60: 9.1 sec/quarter: 16.9 sec (AWD)
EPA: 20-21/28-29 mpg
UNSPRUNG HEROES
Sure, Dubs look cool...but weight
Unsprung weight, or parts of the car the suspension is not supporting -- e.g., wheels and tires -- is the enemy of high performance. The heavier the wheel/tire combination, the less responsive it is to steering inputs and the less adept it is at absorbing bumps. If you've ever wondered why elite sports cars, sport sedans, and race cars feature the lightest wheels possible, this is the reason. But just because crossovers aren't intended to spend all day hot-lapping at the racetrack doesn't mean they should be burdened with huge and heavy rolling stock, even if it makes them look cooler than a penguin wearing Oakleys. As luck would have it, our three crossovers came with big and even bigger wheels -- 18-, 20-, and 22-inch-diameters -- allowing us to examine the weight penalty as size increases.