What do you get when a bunch of hot-rod guys build an off-road-racing truck? No Compromises, No Competition 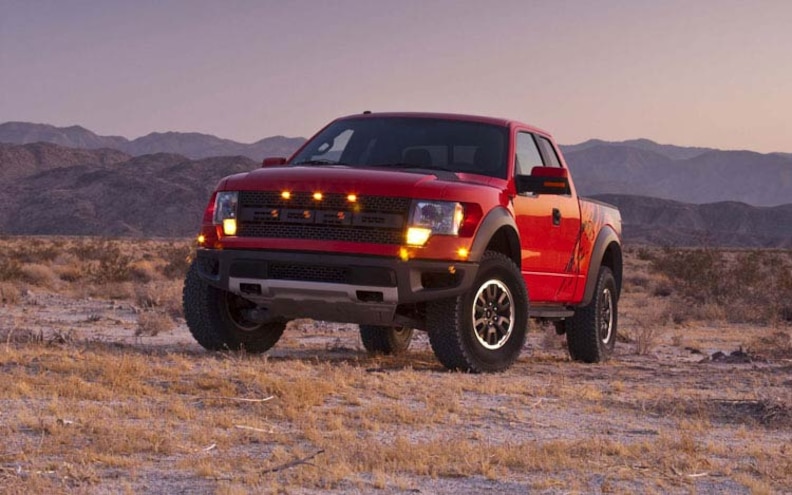 "I mean, this is amazing, right?" shouts SVT Vehicle Dynamics engineer, Ford Tier 3-certified test driver, and possible asylum candidate Gene Martindale over the din of 35-inch tires pulverizing desert gravel.
Amazing? No, this is utterly ridiculous. It's 106 degrees F, and we're streaking across the rock- and sand-strewn frying pan that is Borrego Springs, California, in August. It's absolutely miserable out here, so hot and dry the scorpions have taken refuge under the sidewinders. Word is, Blackwater mercenaries train in this unforgiving desert because it makes Kandahar look like Club Med. 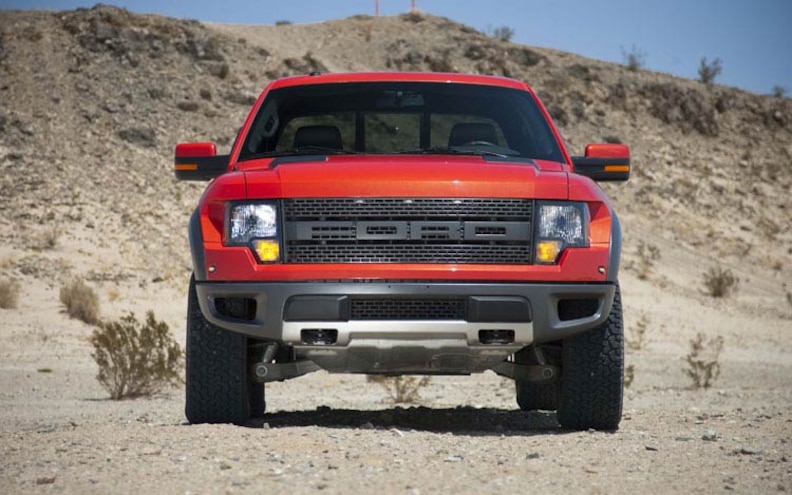 View Photo Gallery | 33 Photos
Photo 2/33   |   2010 Ford F150 SVT Raptor front View
You'd never know it from inside our truck. The A/C is blowing ice cold, and Gene keeps his right foot flat as we literally glide over whoop after whoop (an off-road-racing term for the thousands of beige speed bumps scattered before us). Whoops vary in size and composition, from small ones made of storm-piled sand to taller berms packed down by dirtbike and buggy tires, but all can seriously cripple a vehicle if taken at speed.
We're doing 100 mph. At half this rate, any regular truck would explosively dismantle as fast, hard, and repeated hits induce massive and comprehensive suspension or tire failure. Our truck simply strides over them, with some turbulence for us in the cabin, but without any gut wrenching, bolt stripping, metal-on-metal indications of imminent disaster.
Well, except for Gene. He keeps hollering and looking over to gauge my reaction. Because of my helmet, he can't see the big, goofy grin on my face, nor does he realize I'm not ignoring him. I'm quietly scanning the horizon for the next big hit. Apparently, he takes my stoicism as evidence that I'm not having fun, and since we're already at Vmax, he decides to show me what a little full-throttle opposite lock can do.
It's when we launch off a huge whoop while yawed at 45 degrees, that I realize I should let Gene know how much I'm enjoying myself. While I'd like to die with a smile on my face, I'd rather it not be in this godforsaken place. I let off a whoop of my own, and his response is an immediate and gleeful, "I know, right? You just can't do that in any other truck!" 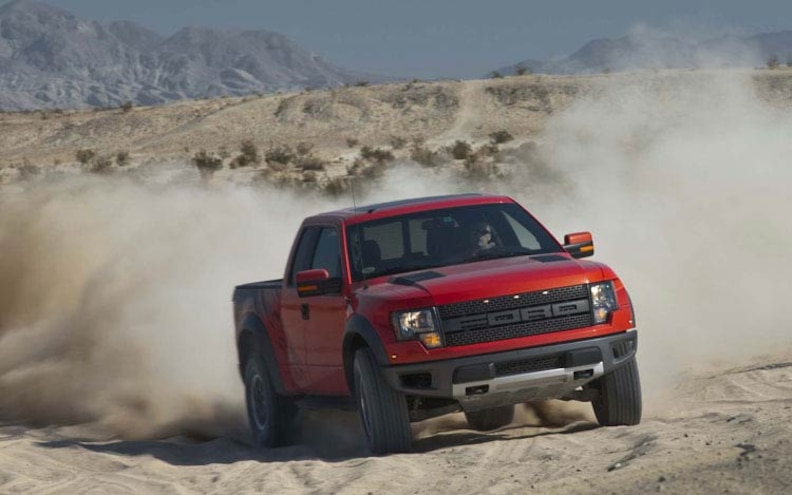 View Photo Gallery | 33 Photos
Photo 3/33   |   2010 Ford F150 SVT Raptor front View
Which is precisely the point. Back in 2006, when Ford's Special Vehicles Team set out to create a performance variant of the next-generation F150, they considered creating another slammed and supercharged street truck like the 1999-2004 SVT Lighting. Then SVT chief engineer Jamal Hameedi studied what was hot and what was not at the annual SEMA aftermarket show. What he saw was a resurging trend among Southern California truck enthusiasts toward lifted full-size trucks and prerunners modeled after desert racers. So he issued a challenge to his SVT team: Build the baddest off-road truck ever offered by an OEM. They call it the 2010 F-150 SVT Raptor, and it's an unquestionable success.
Just look at the numbers: Compared with a standard F-150, the Raptor's track is 6.6 inches wider to accommodate the longer and stronger upper-and-lower control arms, tie-rods, and halfshafts unique to this vehicle. The Raptor uses special composite fenders flared out by eight inches (four on each side) to help cover this wider track and the specially designed, 35-inch BFGoodrich All-Terrain T/A tires. In fact, the Raptor is so wide, it's required to run the federally mandated marker lights normally seen on dually trucks.

View Photo Gallery | 33 Photos
Photo 10/33   |   2010 Ford F150 SVT Raptor engine Undertray
Clearance from the lowest skidplate to the ground is 10 inches, which is easily soaked up by 11.2 inches of front and 12.1 inches of rear suspension travel provided by the specially designed Fox Racing shocks. These shocks use Fox Racing's patented internal bypass technology and are an industry first for a production vehicle. At normal ride height, Raptor shocks are three times stiffer than those in a standard F-150, yet they're supple and compliant. Near the bottom of travel, the Raptor shocks grow roughly seven times stiffer than the F-150's, which prevents hard impacts and the destruction of components and body work.
While bodywork and suspension from the A-pillar forward are almost entirely unique, the engine and interior are only slightly tweaked. Underhood is Ford's stalwart 5.4-liter V-8 that makes 320 horsepower at 5000 rpm and 390 pound-feet of torque at 3500 rpm and mates to a six-speed automatic transmission. It's enough to get the job done, but the real desert racers will want the all-new, high-feature 6.2-liter V-8 that comes out early next year. That engine will make an estimated 400 horsepower and 400 pound feet of torque.
Inside, the Raptor is treated to upgrades that match its aggressive exterior and badge, including a leather-wrapped steering wheel with centering sightline, beefed-up leather seat bolsters, and a four-pack of prewired and fused auxiliary switches, perfect for controlling everything from KC lights to a winch.
With its huge tires, flared fenders, enormous grille, and optional graphics package, the Raptor looks like the ultimate desert toy. But it's more than just a toy; with a 1000-pound payload, 6000-pound towing capacity, and all the bells and whistles of the regular F-150--including the factory-installed integrated trailer brake controller and trailer sway control, the Raptor can serve as the toy hauler and everyday work truck as well.

View Photo Gallery | 33 Photos
Photo 15/33   |   2010 Ford F150 SVT Raptor Front Suspension
SVT made sure the Raptor isn't a penalty box on-road. In fact, despite (or perhaps because of) the massive tires, the overall ride is significantly better than that of our long-term 2009 F-150 Lariat. The key here is those shocks again; with all that travel and progressively firm ride, the Raptor always feels like it's moving in a giant suspension sweet spot. When cornering, it doesn't roll as much your average full-size street truck, and it imparts a feeling of confidence and stability, no doubt due to the extra wide track and the those massive 315/70R17 BFGs.
Those tires deserve special mention as well. You'd think such enormous off-road tuned rubber tucked under a 5900-pound truck would make for an obnoxiously loud ride, but the exact opposite is true. Surprisingly, the BFGs don't howl or scream however hard you push them. They're quiet (perhaps too quiet) all the way up to the limit, allowing you to hear the Raptor's subtle but sonorous exhaust note. The only real disadvantage of street driving a Raptor is all the extra width. It drives big and makes positioning it around tight corners a bit tricky.

View Photo Gallery | 33 Photos
Photo 16/33   |   2010 Ford F150 SVT Raptor front View
At this point, it would be easy to poo-poo Ford's effort as just another big, bad car company coopting the trends of a hard-core enthusiast scene. Surely Ford and SVT left experts like BFG and Fox Racing to develop the hard stuff, and then they just packaged it all up and marketed it as their own, right? No.
What makes the Raptor such a formidable off-road performer is not just the battle-tested hard parts, but the subtleties of the electronics, a realm the aftermarket is loath to enter. To mess with complicated systems like antilock brakes and high-speed electronic-locking differentials, you need the combination of resources, brainpower, and experience only an OEM like Ford and a skunkworks like SVT can provide.
For example, the Raptor's electronic locking rear differential (E-locker) engages at all speeds, in any mode from 2HI to 4LO, with a simple pull of the drive-selector knob. Clicking the Raptor into Off-Road mode initiates a unique, higher-performance throttle map and shift schedule for the six-speed transmission. The result: more aggressive shifting with revs held longer and the flickability of a prerunner with the traction of a 4x4. Hill Descent Control, a Raptor exclusive, utilizes the ABS actuators and allows for slow-speed downhill crawling in forward and reverse, without ever touching the brake pedal.

View Photo Gallery | 33 Photos
Photo 17/33   |   2010 Ford F150 SVT Raptor front View
The Raptor is not only aggressively equipped, it's aggressively priced. Quick, back-of-napkin calculations put the cost of making your own Raptor at least $8000-$12,000 on top of the purchase price of a full-size truck, and that's without most of the fancy electronics. At $38,995, the 2010 Ford F-150 SVT Raptor is only $2500 more than the F-150 FX4, yet an order of magnitude more capable. When they become available early next year, 6.2-liter-equipped Raptors will retail for $41,995.
With this level of capability at that price point, we'd have to agree with chief engineer Hameedi. He firmly believes the Raptor has no compromises and no competition.

View Photo Gallery | 33 Photos
Photo 23/33   |   2010 Ford F150 SVT Raptor interior View
Raptor Facts
• The Raptor name owes its creation to a bean counter, a finance guy on the SVT team who thought it would make a good code name while they thought up another moniker. The names Terminator and Condor (the latter soar over the Anza Borrego desert test facility) were considered, but the Raptor name stuck--though not without difficulty. Boutique sports-car manufacturer Mosler owned the rights to the name but settled with Ford/SVT.
• Other Raptors include the Toronto NBA team, a Yamaha ATV, the Air Force's F-22 stealth fighter jet, and a roller coaster in Sandusky, Ohio--though Ford's is the only one with 35-inch claws.

View Photo Gallery | 33 Photos
Photo 32/33   |   2010 Ford F150 SVT Raptor side View
• With the exception of the headlights, the Raptor is unique from the F-150 from the A-pillar forward. The vented hood, composite fenders with heat extractors, front fascia, and front bumper are all Raptor exclusives. That front bumper is Ford's first use of high-strength hydroformed steel as an exterior panel.
• Raptors are built right alongside all other F-150s at Ford's Dearbon Truck Plant. Despite the significantly widened track and fenders and lengthened and strengthened suspension components, the Raptor retains nearly all the factory mounting points from the F-150. In fact the frame required no additional drilling, welding, or cutting of. Only the front shock towers needed top-mounted spacers to give the Fox shocks the necessary, wider angle. Giving the Raptor its own look and feel while minimizing the number of special manufacturing steps helps keep the cost down. In fact, Raptors need to be pulled off the production line at only two stages: wheel alignment (because of the extra wide track) and for the installation of the numerous aluminum skidplates.
• Optional steel sidesteps are vented and wider than normal to prevent rocks and debris kicked up by the widened track and tires from hitting the flared fenders.
• The patented internal bypass shocks developed in conjunction with Fox Racing Shox help make the Raptor ready for anything--possibly even war. While this is the first time such technology is available on a production vehicle, Fox Racing has been providing this shock technology the U.S. military and its allies. Our Army HMMWV Humvees and the British Royal Army's MWMIKs (Mobility Weapon Mounted Installation Kit) Supacat infantry-support vehicles use internal bypass shocks for improved off-road performance and reduced wear and tear. Hoo-AH.