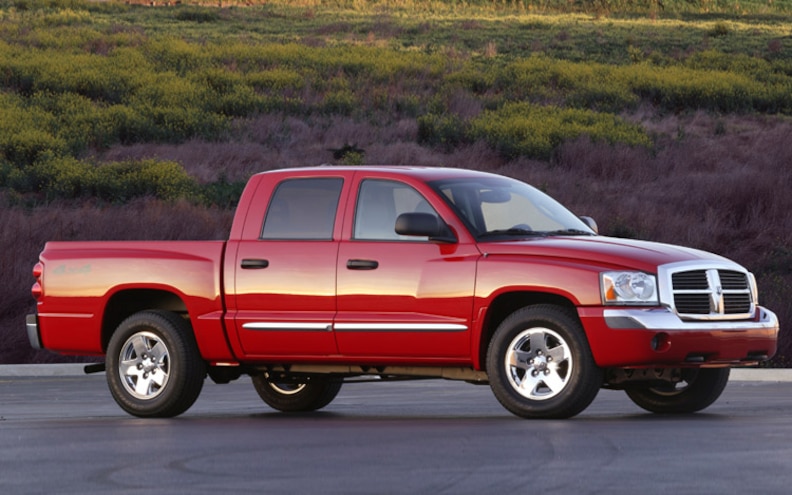 Dodge Cracked the code on the midsize truck in 1987 with the first Dakota. Its calling card was the availability of a V-8 in a category largely populated by big fours and V-6s. Dodge’s first Dakota was boxy, like the full-size Rams of the day, but the second gen picked up cues from the late-1990s Ram.
View Photo Gallery | 19 Photos
Photo 2/19   |   2007 Dodge Dakota 4x4 Rear View
For 2005, the third-gen Dakota gained creased sheetmetal, an oversize grille, and a spruced-up interior riding on a new chassis featuring boxed frame members and a revised front suspension for 2WD and 4WD models (replacing different 2WD/4WD configurations that had repeated ball-joint trouble in the previous Dakota and Durango).
Buyers of the previous Dakota cited the availability of a V-8 as a key feature, so the latest trucks employ the same set of engines. A 3.7-liter SOHC V-6 is standard, hooked to a four-speed automatic or six-speed manual. Its 210 horsepower and 235 pound-feet of torque aren’t quite enough to make the heavier Dakota feel sprightly. The V-6 also doesn’t have a significant fuel economy advantage -- in some cases, none at all -- over the V-8s.
View Photo Gallery | 19 Photos
Photo 3/19   |   2008 Dodge Dakota Interior
So the majority of the Dakotas were sold with one of two versions of the 4.7-liter SOHC V-8. The standard engine is a 230-horsepower model with 290 pound-feet of torque -- it can be mated to a five-speed automatic or a six-speed manual -- while the High Output version puts out 260 horsepower, 310 pound-feet. This engine requires premium fuel and can be had only with the five-speed automatic. Dakota fans lamenting the demise of the 5.9-liter R/T were thrilled when Dodge introduced an uprated 4.7 in the 2008 model year (along with a front-sheetmetal refresh) that boasted 302 horsepower and 329 pound-feet of torque.
View Photo Gallery | 19 Photos
Photo 4/19   |   2008 Dodge Dakota Engine Bay View
Downstream from any of these engines would be either a standard rear-drive system (a limited-slip differential was available) or one of two 4WD setups -- a traditional part-time with low-range or a full-time system.
View Photo Gallery | 19 Photos
Photo 5/19   |   2007 Dodge Dakota Dash
Dodge also tweaked the body and trim levels with this generation of Dakota. Gone is the short-cab, long-bed version. The base truck is the Club Cab, now with two demi doors behind the fronts, opening to a cargo area fitted with small jump seats. The Quad Cab features a larger cabin, and, starting in 2006, rear doors that open past 90 degrees for easier access. Because all Dakotas now ride on the same 131.3-inch wheelbase, the tradeoff for a larger cab is a smaller bed. The Club Cab gets a 6-foot-6-inch bed, while the Quad Cab makes do with a 5-foot-3-inch bed; at least it’s deeper than the previous generation’s.
View Photo Gallery | 19 Photos
Photo 6/19   |   2005 2009 Dodge Dakota Rear Profile
The third-generation Dakota hasn’t been as popular as its predecessor. Nor has the latest Dakota been the most reliable; owners report a variety of electrical problems, short-lived catalytic converters, easily warped front brake rotors (despite Dodge going to larger brakes with twin-piston calipers), and soggy shocks. Ironically, the Dakota’s toughest competition came from within the family: The full-size Ram gets nearly the same fuel economy in a larger, more comfortable package. But for those lacking the garage space, the Dakota is a fine choice. Our advice: Go for the latest, highest-spec V-8.
View Photo Gallery | 19 Photos
Photo 7/19   |   2005 Dodge Dakota Back Seat