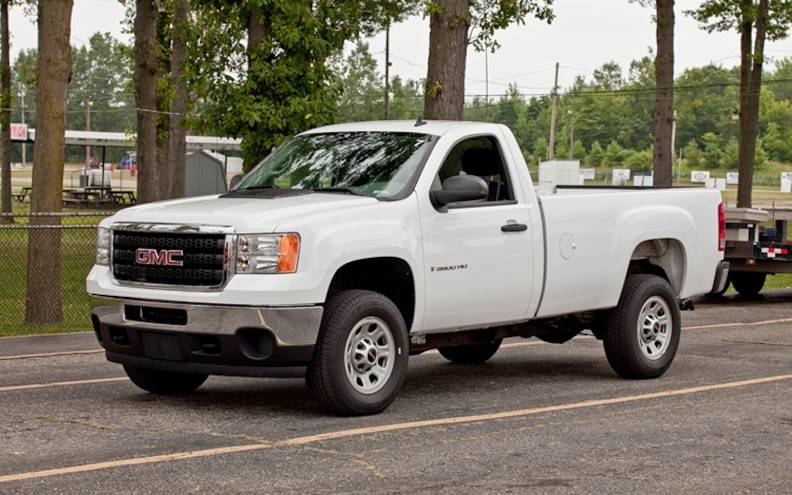 There aren't that many street performance trucks out there these days. The Silverado SS, Ford Lightning, and Dodge Ram SRT10 are gone, and the only truck Ford SVT makes is the Raptor -- an awesome high-performance off-road-biased truck, but not a street rod. Even when those pickups were around, they represented a big compromise: To get better performance, the towing, payload capacity, and fuel economy suffered.
View Photo Gallery | 13 Photos
Photo 2/13   |   2011 GMC Sierra 2500HD Work Truck Front View
That doesn't have to be the case. There are options out there for those who want some street performance with actual capability at the job site: work trucks. The regular-cab configuration, along with a lack of interior and power amenities, means lower overall weight. Add to that the diesel engine option and rear drive, and you get a pickup with light weight, excellent fuel economy, and the highest possible towing and payload capacities in the line.
It was just this combination that we had the chance to drive recently at GM's proving ground in Michigan. This specific truck is a development vehicle used internally, but is current on all computer-programming updates and is powered by an early-build Duramax. And while the badges say 3500HD, it is actually a three-quarter ton (2500HD). Based on a 133.6-inch wheelbase, this is the work-truck version of the new Sierra HD, with a regular cab, rear drive, and long bed. That it is the work truck means forgoing such creature comforts as power windows, navigation system, rearview camera, and more, but for those who are okay with that, the payoff is huge.
View Photo Gallery | 13 Photos
Photo 3/13   |   2011 GMC Sierra 2500HD Work Truck Rear Three Quarters Static
GM supplied the curb weight of this truck, which is 6522 pounds; combine that with the 397-horsepower, 765-pound-foot Duramax V-8, and the truck has a 16.4:1 weight-to-power ratio. Not bad for a three-quarter ton. Power delivery is quick and linear off the line, and the tires provide plenty of grip. This is a truck that's built for hard work -- 9900-pound GVW, 17,800-pound fifth-wheel towing capacity, 3378-pound payload -- yet if you don't regularly glance down at the speedometer, you will get a speeding ticket in this truck. Performance numbers show 0-to-60-mph time is 5.9 seconds and the quarter-mile time is 14.8 seconds at 91.3 mph. Diesel clatter is fairly quiet and the six-speed transmission's shifts are smooth. While you feel the torquey thrust of power when accelerating, there is a strange disconnect between what the truck should be doing (hard work) and what it actually is doing (hitting 60 mph in less than six seconds). The thought arises that even though trees are whizzing by, you can't possibly be going as fast as it seems. But you are.
View Photo Gallery | 13 Photos
Photo 10/13   |   2011 GMC Sierra 2500HD Work Truck Front Three Quarters Static Passenger
Aside from the lack of interior amenities, including limited passenger and cargo room in the cabin, there is no compromise between the work aspect of this heavy-duty truck and the fun factor. And while we didn't have the chance to record fuel-economy data, this configuration has the potential to be among the best in this size category. You can buy this combination in both GMC and Chevrolet skins, but odds are most dealerships won't carry this exact truck. We took a look at how much it would cost to order one. Base price for the rear-drive longbed regular cab 2500HD is $28,960. Add the Duramax and Allison (the turbodiesel and transmission cost about an extra $8400 over the price of the base work truck), and MSRP is $37,680 without any other extras. (You can also get rear drive, regular cab, and Duramax/Allison in a 3500HD configuration.) That price is only marginally higher than what the half-ton Lightning and Silverado SS cost several years ago.
View Photo Gallery | 13 Photos
Photo 11/13   |   2011 GMC Sierra 2500HD Work Truck Rear View
Best possible towing and payload capacity in the 2500 heavy-duty line, the least expensive way you can get a diesel, incredibly quick to 60 mph, potentially excellent fuel economy -- the street truck still lives, just in a different form than before.