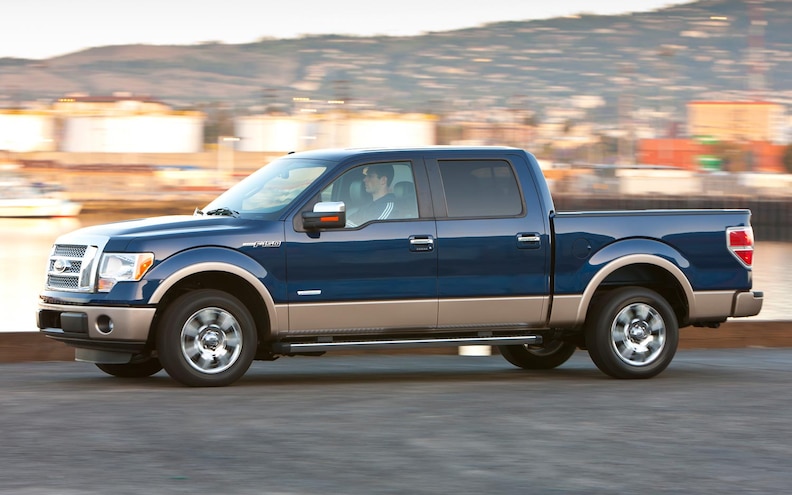 The 3.5-liter, 365-horse, 420-pound-foot twin-turbo V-6 EcoBoost is the newest engine to join the Ford F-150's engine lineup. This change happened for the 2011 model year as Ford cleaned house, replacing two 4.6-liter V-8s (one two-valve, one three-valve) and a 5.4-liter V-8 with a 3.7-liter V-6, a 5.0-liter V-8, a 6.2-liter V-8, and the aforementioned EcoBoost. And for the first time, all engines in the line use a six-speed automatic transmission.
View Photo Gallery | 21 Photos
Photo 2/21   |   2011 Ford F 150 EcoBoost Lariat SuperCrew Rear Three Quarters
The twin-turbo isn't the largest displacement engine available -- those honors go to the 6.2-liter V-8 that's standard in the Raptor, Lariat Limited, and Harley-Davidson edition. It doesn't have the most horsepower or torque -- that would also be the 6.2 -- and it doesn't come standard in any F-150. Yet, despite what seems initially like shortcomings, Ford has made this engine its franchise player, declaring a V-6 the top-of-the-line engine. (What!!!???)
View Photo Gallery | 21 Photos
Photo 3/21   |   2011 Ford F 150 EcoBoost Lariat SuperCrew Wheel
But pricing is aggressive: The upgrade from the 5.0-liter can cost a mere $750, depending on trim level. For that money, you only add five horsepower (which peaks at a lower rpm). Big deal, right? The true benefit is with torque, where the gain is 40 lb-ft (420 versus the 5.0's 380), and peak torque is at 2500 rpm as opposed to the 5.0's 4250. In our tester, a rear-drive Lariat SuperCrew, it a $750 upgrade. That, plus the 3.55:1 limited-slip, Lariat Chrome and Lariat Plus packages, heated and cooled leather seats, trailer brake controller, and tailgate step, brought the as-tested price to $43,155. The dark blue and beige paint combination looks good on this truck. So does the well-crafted interior, which combines black leather captain's chairs, light-hued wood on the dash, and an extremely roomy second row, which would seem to suggest this truck isn't ready for hard work. However, our EcoBoost tester can tow 11,300 pounds, has a GVWR of 7100 pounds, and an as-tested payload capacity of 1572 pounds.
The EcoBoost engine doesn't sound like a V-8, but it certainly pulls like one. The twin-turbo's power delivery was much smoother than expected, with no noticeable turbo lag, and much quieter, too. It is very quick off the line, and there is plenty of pull at higher rpm as well. At 17.2 mpg, our fuel economy was right within the EPA estimates at 16 mpg city/22 highway. Associate editor Mike Febbo feels "This is the perfect truck engine. A torque curve you can lay a ruler on and decent mileage -- why do we mess around with V-8s anymore?"
View Photo Gallery | 21 Photos
Photo 13/21   |   2011 Ford F 150 EcoBoost Lariat SuperCrew Engine
For those who doubt the power of this engine, the EcoBoost excelled at the track. The twin-turbo propelled the SuperCrew F-150 to 60 mph in 6.2 seconds and through the quarter mile in 14.8 seconds at 95.0 mph. The last time we tested a 5.4-liter-powered F-150 was in 2009, when the four-wheel-drive Lariat took 8.1 seconds to hit 60. (And that was with the six-speed automatic. When we tested the 5.4 with the four-speed auto a few years before that, it took 9.1 seconds.) It's faster than the 4WD Silverado with the 5.3-liter V-8 (7.7 seconds to 60), Hemi-equipped Ram 1500 Laramie (7.0 seconds), rear-drive Titan (7.6 seconds), and 4WD Tundra (6.7 seconds). Not only that, but Ford offers the EcoBoost in a regular cab model. You could essentially build your own Lightning with this combination, and when we priced one out, the least expensive way to get the EcoBoost was in a rear-drive regular cab on the 145-inch wheelbase, with not much in the way of interior amenities, for $29,145. That is an absolute bargain, and in that truck, 0-60 times would be even faster than in the SuperCrew.
View Photo Gallery | 21 Photos
Photo 14/21   |   2011 Ford F 150 EcoBoost Lariat SuperCrew Center Stack
Is it too good to be true? Nope. This engine is fantastic. Our only concerns were with fuel economy and reliability. In real-world driving, we got 17.2 mpg. We do wonder if it would still surpass V-8 fuel economy when towing, but that's a test for another day. Ford has publicly tested the EcoBoost in tough environs; that and the resilience of modern-day turbocharging systems -- consider turbodiesels in heavy-duty trucks -- gives us confidence in the long-term reliability of this engine. As Febbo aptly says, "The EcoBoost is the game-changer for trucks. If they can get enough people in them, they will have converts left and right."
View Photo Gallery | 21 Photos
Photo 15/21   |   2011 Ford F 150 EcoBoost Lariat SuperCrew Side Step Rail