RUBICON vs RUBICON: On the Rocks, with a Twist 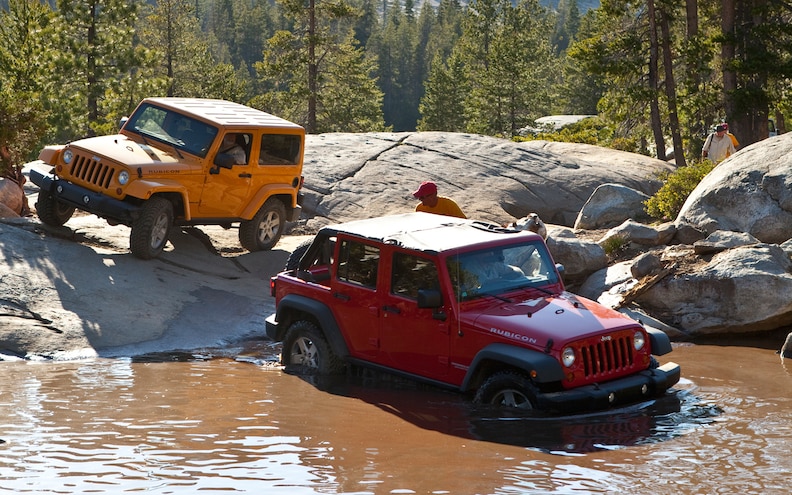 When Jeep invited us to drive the 2012 Wrangler on the Rubicon Trail, we were filled with a mix of excitement and apprehension. On the one hand, we had the keys to possibly the most capable stock vehicle on the market: the Wrangler Rubicon. On the other hand, we were taking it on one of the hardest trails around, one used almost exclusively by modified vehicles. How would a stock 4x4 do in this environment? As you know, the Wrangler isn't any ordinary 4x4, and the Rubicon model is a step beyond the Sport and Sahara. And, as we found out on the trip, the entire Wrangler lineup (the two-door Wrangler and four-door Unlimited; no pickup yet) has been improved for 2012.
View Photo Gallery | 36 Photos
Photo 2/36   |   2012 Jeep Wrangler Line Up
Consider this the second part of the Wrangler's major overhaul. Part one happened for the 2011 model year. That was when the JK (the current generation's code name) received a new interior, and the Sahara got a body-color hardtop and fender flares. The hardtop is made of the same material as it was before, but what sounds like a minor change actually has a major effect on the Wrangler's appearance. In addition, the rear windows are larger as of 2011, improving visibility. For 2012, the body-color hardtop and fender flares are optional on the Rubicon, too.
View Photo Gallery | 36 Photos
Photo 3/36   |   2012 Jeep Wrangler Front Profiles

"Remove the top, take the doors off, and put the windshield down for the ultimate open-air drive."

Inside, the welcome revisions include the use of higher-quality materials; a redesigned center stack; new instrument panel and steering wheel; additional storage space; and strategically enhanced sound insulation, making this the quietest Wrangler ever. Some creature comforts never before seen here, such as seat heaters, power heated mirrors, and redundant steering wheel controls, make this the most refined (gasp!) Wrangler cabin ever. There are a couple details we'd love to see change in future Wranglers, though. Now that there are power lock switches on the (still removable) doors, it would be nice to have the power window controls put there, too, instead of on the center stack. We'd also like to see an upgraded navigation system.
For 2011, Jeep paid homage to the model's heritage by using hex-head bolts in the cabin and attaching a "Jeep, Since 1941" strip to the glovebox grab handle. There are even two sneaky cues (like Blu-ray Easter eggs) on the windshield. Above the rearview mirror, where neither sunvisor can provide shade, some manufacturers add patterned paint or tinting to cut down glare. In that spot, Jeep put a logo that looks like a silhouette of its seven-slot grille and round headlights. And at the base of the windshield, on the right side, sits a tiny silhouette of a Wrangler rock-crawling up a hill.
View Photo Gallery | 36 Photos
Photo 10/36   |   2012 Jeep Wrangler Rubicon Front View On A Rock
Which brings us to part two. Before the 2012 model year came around, Jeep knew the Pentastar engine was going into the Wrangler, even if the company didn't make an official announcement. The pairing makes perfect sense: more horsepower, more torque, and better fuel economy. The old iron-block 3.8 put out 202 horsepower at 5200 rpm and 237 horsepower at 4000 rpm, and when we last tested a Wrangler equipped with that engine, it reached 60 mph in 9.8 seconds. The all-aluminum 3.6-liter V-6 Pentastar puts out 285 horsepower at 6400 rpm and 260 lb-ft at 4800 rpm. The transmission options have changed as well. While the six-speed manual carries over with the same ratios, the four-speed automatic has been replaced by the Grand Cherokee's five-speed. An interesting note: The Wrangler is the only vehicle in the Chrysler Corporation lineup -- yes, including the cars -- that pairs a manual transmission to the Pentastar. All the rest of the major mechanical features (axles, suspension, steering, brakes), body, dimensions, and structure are essentially carryovers. The exception is the 4.10:1 rear axle. It had been stock in all Rubicon models and now is optional for those equipped with the automatic trans. The stock axle there is a 3.73:1 axle that improves fuel economy.
View Photo Gallery | 36 Photos
Photo 11/36   |   2012 Jeep Wrangler Rear View Off Roading

"The trail takes you past beautiful vistas overlooking crystal-clear lakes. there was also more water this year."

Our on-road drive started out in Squaw Valley, in the Sierra Nevadas, and finished at the Rubicon's Loon Lake trailhead. The route was a little over 100 miles, all of which took us along twisting two-lanes that circle Lake Tahoe. It included a lot of elevation changes, plus sudden large openings in traffic that gave us plenty of opportunities to test out the Pentastar's acceleration. While this combination would've simply highlighted the weaknesses of the previous 3.8-liter (universally considered a dog), the 3.6-liter V-6 shone on the drive route. Advantages of the 3.8 over the 3.6 are smoother horsepower and torque curves, and a lower peak rpm for both horsepower and torque.
But those are eclipsed by the 3.6's excellent response and noticeable improvement in power. The Pentastar is significantly faster from a stop. Also, the engine sounds much more upscale than the coarse 3.8-liter, and the exhaust note is throatier. Paired with either transmission, the 3.6 feels much more refined. Where the 3.8 seems pokey, the 3.6-liter actually makes the JK feel spry. Jeep estimates that the 0-60 times are 2 to 3 seconds faster with the new engine, and based on our experience, that sounds about right (see sidebar). It makes the Wrangler a genuinely good daily driver, not just a fantastic off-roader with an on-road demeanor you tolerate during the week.
View Photo Gallery | 36 Photos
Photo 18/36   |   2012 Jeep Wrangler Rear And Side Views
When we reached the trailhead, we got out of the Unlimited Sahara we'd been driving and into a Wrangler Rubicon. The Jeeps were a mix of two- and four-doors, mostly automatics, all with the tires aired down to increase their footprint and improve traction on the rocks. The Rubicon Trail is in one of the most beautiful parts of the country, through the Eldorado and Tahoe National Forests. Still officially a county road, it cuts through an evergreen forest, and runs up and over the Sierras. Terrain varies from slick granite to dirt dotted with rocks to massive boulders that require highly technical driving to traverse or go around. The trail takes you past breathtaking vistas overlooking crystal-clear lakes. There was also more water on the trail than has been in the past. The heavy winter, which lasted so long Jeep had to postpone this drive, created puddles at the most inopportune locations on the Rubicon, and there were water crossings in spots where it had been dry the year before. The Rubicon is known for changing from year to year, but the conditions were especially tough this time around.
View Photo Gallery | 36 Photos
Photo 19/36   |   2012 Jeep Wrangler Front View
Despite the challenges, all the Jeeps survived, which was a big surprise to the owners of highly modified off-road vehicles that were sharing the trail with us. In many spots, the Rubicon isn't wide enough for two-way traffic, so groups of 'wheelers waited as we passed, smirking, expecting the Wranglers to roll, get stuck, or break. None of that happened. Oh, sure, things scraped and the occasional muffler was reshaped, but everything got through. The new engine and trans worked well, and even though peak torque is now at a higher rpm, there was no noticeable difference when off-roading at low speeds.
View Photo Gallery | 36 Photos
Photo 32/36   |   2012 Jeep Wrangler Front Views
Jeep's goal with this latest version of the Wrangler was to make the vehicle more refined and better on a day-to-day basis, without sacrificing the JK's off-road ability. The new Wrangler stays true to the model's 71-year-old roots, but now is a lot more fun to drive on-road.
View Photo Gallery | 36 Photos
Photo 33/36   |   2012 Jeep Wrangler Line Up Off Roadong