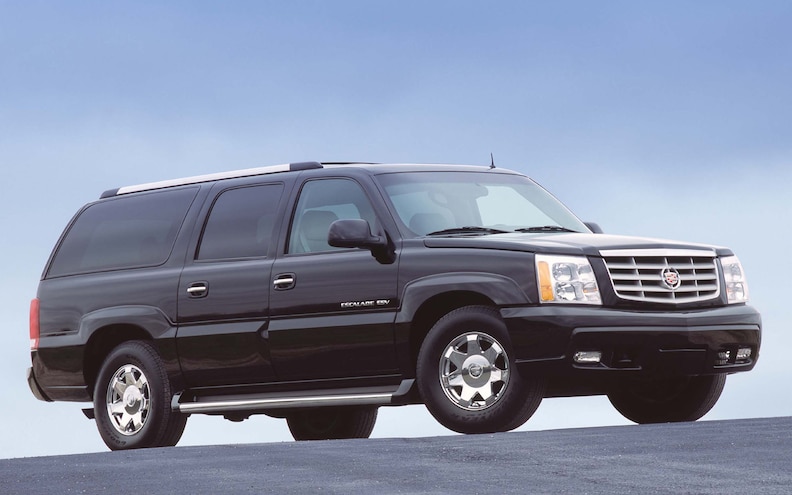 By the late 1990s, sport/utility vehicles ranging from large to outlandish had established their dominance, but it wasn't until Lincoln introduced the Expedition-based Navigator for 1998 that the idea of a domestic luxury SUV seemed at all rational. GM followed with the Cadillac Escalade in 1999 -- a rebadged and slightly spiffed-up Yukon Denali -- prompting truck enthusiasts to chuckle and industry watchers to make cynical predictions.
View Photo Gallery | 11 Photos
Photo 2/11   |   2004 Cadillac Escalade Front View
Those experts changed their tune in 2002, when Cadillac brought forth the second-generation Escalade. As before, it was based on GM's full-size SUV platform, but the platform was significantly improved. Also, because Cadillac's involvement was more than just an afterthought, the Escalade was its own thing: a unique, original, truly top-end luxury SUV. It also marked the first use of the angular design philosophy that soon permeated the Cadillac lineup.
View Photo Gallery | 11 Photos
Photo 3/11   |   2002 2006 Cadillac Escalade Front View
Buyers who wanted something more than a Yukon with sniff-happy leather were delighted to see a new V-8 on the Escalade's menu. Where the truncated (two model-year) first gen had the same powerplants as the GMC equivalent, the 2002 Escalade received a high-output version of the 6.0-liter Vortec 6000 engine also used in GM's larger pickups and SUVs. Pounding 345 hp and 380 lb-ft of torque through a four-speed automatic (sorry, no manuals), the big Vortec motivated the Escalade righteously. Zero-to-60 times of 7.5 seconds (from a Motor Trend test of the 2002 model) put the big Caddy at the top of the heap. GMC Yukon buyers made do with 25 fewer ponies from their 6.0s.
All models featuring the 6.0-liter engine had 4WD, and, in 2003, a special version of StabiliTrak debuted. A 5.3-liter V-8 was also offered, available in AWD or 2WD packages; it was not exactly a weakling at 285 hp and 325 lb-ft, and both figures would increase by 10 for 2005.
The second-gen Escalade had a massively improved interior with standard leather, Bose audio, and automatic climate control. Cadillac further upgraded interior materials and options for 2003, and made XM Satellite radio and a tire pressure monitoring system standard for 2004.
View Photo Gallery | 11 Photos
Photo 10/11   |   2002 Cadillac Escalade Interior
Touch-screen operation came to the optional nav system for 2005. There were no major changes for 2006 because a new generation of Escalades would arrive for model year 2007.
It may say Cadillac on the tailgate, but when it comes to reliability, you're talking about Chevy and GMC. According to an online search of Escalade trouble spots, the 2002 model had "significant" problems with the engine (fuel pressure regulator, crankshaft position sensor, failure-prone catalysts) and "moderate" problems with components in the transmission/driveline, braking, and accessories categories. The reliability outlook is generally better for later models, though the 2005 is noted to have catalyst failures, too.
View Photo Gallery | 11 Photos
Photo 11/11   |   2004 Cadillac Escalade ESV Platinum Front Seats
Per Kelley Blue Book, Escalades of all years in this range are worth about what a same-year GMC Yukon Denali is. When you think that the Cadillac had more power and arguably finer appointments than the GMC, it's enough to make you accept the sports-hero/commodities-trader image that goes with owning this angular, fuel-thirsty brute.