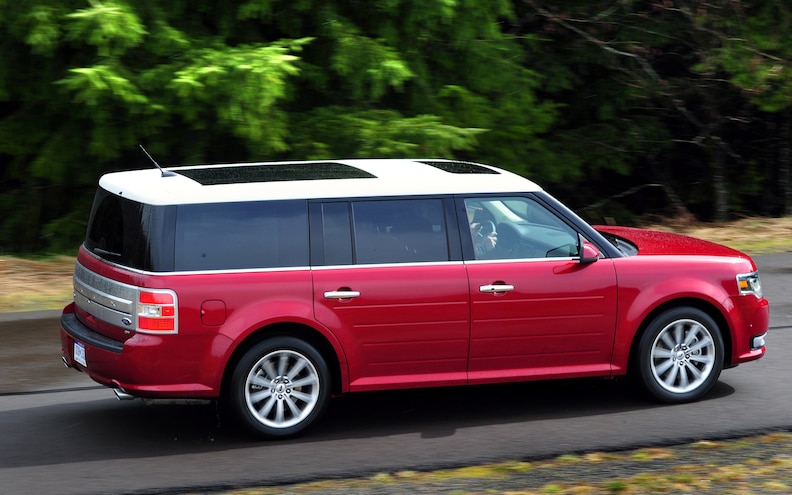 The updated 2013 Ford Flex crossover -- Taurus Contry Squire, sans wood siding, if you're so inclined -- was first shown to the public last November at the 2011 Los Angeles Auto Show. It arrived bearing a sleeker nose, some fresh safety gear, improved brakes, and an improved version of the base 3.5-liter V-6. We've finally gotten some time behind the wheel, but first, a recap of all of the revisions.
View Photo Gallery | 17 Photos
Photo 2/17   |   2013 Ford Flex Front End
In the engine room, electric power steering assist becomes standard and variable valve timing proliferates from the intake to all four cams. Together, the steering and cam-twiddling improve efficiency enough to boost output by 23 horses and 7 lb-ft, while fuel economy improves by an estimated 1 mpg city and highway to 18/25 mpg with front-drive and 17/24 on all-wheelers. On the safety front, Ford adds all of the crash prevention and mitigation gear that debuted on Flex's platform-mates: adaptive cruise control with forward collision alert and blind-spot monitoring from the Taurus, and the inflatable seat belts and Curve Control from the Explorer. Push-button start, rain-sensing wipers, power tilt/telescoping steering, power folding mirrors, and the new and much improved MyFord Touch are also added to the options list.
View Photo Gallery | 17 Photos
Photo 3/17   |   2013 Ford Flex Rear Three Quarters In Motion
Stylewise, the prominent grille bar now extends into the headlamps and has been stripped of its big Ford oval, replaced by letters spelling F L E X in a font so bold you half-expect them to be reversed, AMBULANCE-style, for legibility in rearview mirrors. From the rear, you'll see dual exhaust outlets on all models and you'll notice that the blue oval has been similarly demoted from a large central badge to a smaller one in the lower right corner. There are six new wheel designs as well. Inside, the seat trim, steering wheel, and instrumentation are all upgraded for added poshness.
The engineers also launched a mission to hush the Flex, wrapping the shock towers and rear wheelhouses with sound absorbers and improving the hood insulator and firewall insulation. They've also added a few tasks to the anti-lock braking system's to-do list, including Curve Control (which senses when a driver has entered a turn too fast and sheds up to 10 mph so the car stays on course), and a rudimentary torque-vectoring system that lightly brakes an inside wheel when accelerating through a turn to route more torque outboard. For the record, Motor Trend is generally opposed to using the brakes to make the car go faster. Since they're doing more work, the brakes get a larger master cylinder, retuned booster, larger vented rotors all around from the Taurus SHO (except with the base 17-inch wheels), and upgraded friction materials.
View Photo Gallery | 17 Photos
Photo 10/17   |   2013 Ford Flex Front Three Quarters In Motion
How does it all work? The added power and broader torque curve are readily noticeable on the base V-6, which steps off with greater authority, though we wish the shifts happened quicker and with less torque sag. The new brakes feel great -- nice firm pedal, minimal travel, easily modulated for smooth stops. And try as I could, I found no fault with the electric power steering. Its weighting felt natural; the quicker ratio is welcome; and with most of the rubber isolation out of the system, the driver can sense road-surface texture through the rim, but not changes in road-surface grip. Interior noise levels are remarkably low, allowing front-seat conversation to be easily heard from the third row. EcoBoost models dial all of the above impressions up several notches, with truly naughty acceleration rates and slightly crisper steering feel.
Flex sales may not be setting any records, but the car is luring more buyers into the Ford brand than any other model, and each one appeals to its owner to such an extent that the Flex boasts the highest retention rate in the Ford family. With prices rising only $745-$1420 depending on model variant (the Titanium version has been eighty-sixed), these mid-cycle spiffs certainly stand to make those repeat buyers even happier.
View Photo Gallery | 17 Photos
Photo 17/17   |   2013 Ford Flex Front Three Quarters In Motion 2