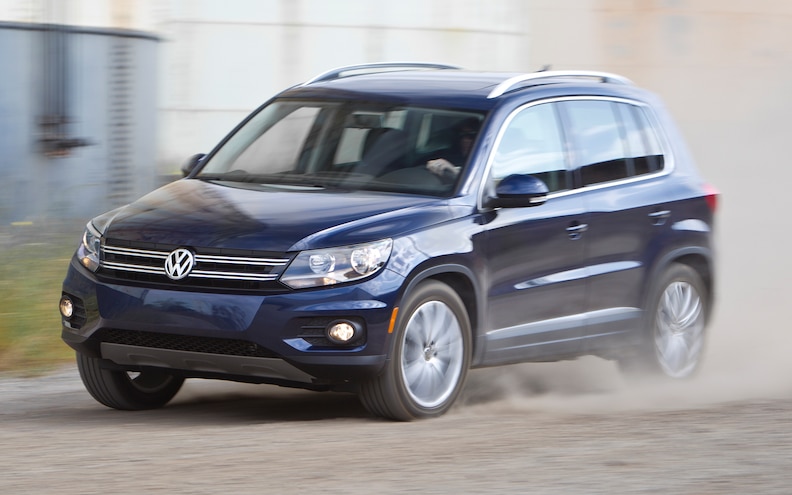 Automotive market segments that were formerly the epitome of boredom and compromise are suddenly getting more interesting. Take, for example, the midsize sedan, long the poster child for blandness and compromise. Suddenly, that segment has a number of stylish and intriguing entrants like the Hyundai Sonata and upcoming 2013 Ford Fusion. The compact SUV segment to which the 2012 Volkswagen Tiguan belongs has also seen an injection of style, though its makeover is more modest than some others.
View Photo Gallery | 21 Photos
Photo 2/21   |   2012 Volkswagen Tiguan Front View
The 2012 model wears VW's signature Murat Gunak front-end treatment. Conservative and understated, but still stylish, it brings the Tiguan in-line with the rest of VW's lineup. Around back, the taillights are a bit more prominent and angular than before, but overall, the mini-Touareg silhouette is relatively unchanged.
View Photo Gallery | 21 Photos
Photo 3/21   |   2012 Volkswagen Tiguan Side View In Motion
Unlike its larger sibling, the U.S.-spec Tiguan is available with just one powerplant -- VW's proven 2.0-liter turbo four-cylinder. Producing 200 horsepower and 207 lb-ft of torque, the direct-injected engine is more powerful than most base engines in the segment, though the Kia Sportage SX offers an extra 60 hp and the 2013 Ford Escape's 2.0-liter turbo-four offers an extra 40 hp and a whopping 63 lb-ft of extra torque. That said, with a 7.8-second 0-60 time and 16.2-second quarter-mile at 86.4 mph, the Tiguan is solidly mid-pack between its turbocharged and naturally aspirated four-cylinder competitors.
Refinement isn't exactly the 2.0 TSI's strong suit, however. It makes a diesel-like clatter at idle, likely due partially to the direct injection. The drivetrain also transmits an annoying bass frequency just over 1000 rpm at part throttle, as if the engine is lugging. At wide-open throttle, the engine is quite vociferous as well, especially when compared to the new Ford Escape, which is exceptionally quiet for a four-cylinder SUV. Road and wind noise is about par for the segment, but our test vehicle exhibited an intermittent squeak from the steering column when turning.
During an impromptu backroad romp, the Tiguan proved willing to play. Slapping the automatic into sport mode and shifting between second, third, and forth proved its surefootedness and confidence during spirited driving.
View Photo Gallery | 21 Photos
Photo 10/21   |   2012 Volkswagen Tiguan Front Seats
Interior styling largely follows the theme set by the exterior: conservative but stylish. The dash is topped with soft-touch textured plastic foam making a positive first impression and its eight small multi-directional air vents create a unique industrial look. The center multi-function display is a smallish 5-inch unit that doesn't stand out well in a market, where 7 and even 8-inch touchscreen displays have become common. However, thanks to a combination of knobs, buttons, and touch commands, it does get the job done relatively simply and effectively. The driver information center screen in the middle of the gauge cluster is also lacking visually thanks to its 16-bit look, but like the center touchscreen, it gets the job done from a functional standpoint.
Should your hand venture below the top of the dash and main controls, you'll touch hard plastic. But this is hardly atypical for the segment, and the fact that VW spent a little extra to go with the soft-touch dash topper makes it clear the company wanted to make an upscale impression with the Tiguan.
View Photo Gallery | 21 Photos
Photo 11/21   |   2012 Volkswagen Tiguan Engine
Those upscale ambitions are reflected by our Tiguan's $31,345 as-tested price, which is slightly higher than many of its comparably-equipped peers. The mid-level SE trim of our tester offers most features buyers in this segment will likely want, including iPod connectivity, and Bluetooth connectivity. Oddly, the driver's seat offers power adjustment for the seatback recliner only. To get full 12-way power adjustment, you'll need to step up to the $34,795 SEL trim.
If you're shopping strictly on the basis of value, there are more compelling choices out there for less money, but there are few other compact SUVs that offer the Tiguan's combination of European style, and an engaging powertrain. For those shoppers, the Tiguan is worth a look.
View Photo Gallery | 21 Photos
Photo 12/21   |   2012 Volkswagen Tiguan Rear View In Motion