Saying, so long to a dependable road warrior 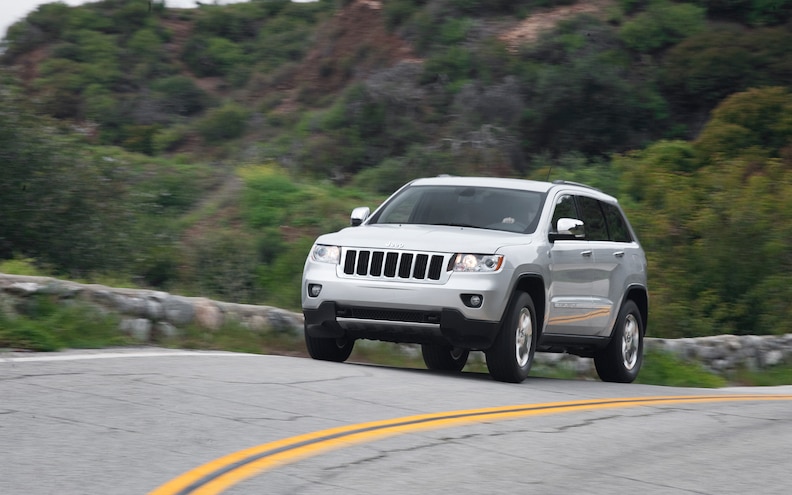 In the 13 months we had our Jeep Grand Cherokee those on the staff who took it out for a weekend spin, either camping or on a long roadie, almost all came back with some variation of what video producer Duane Sempson said upon return from his holiday to Idaho, "Its #@!*#! awesome!"
View Photo Gallery | 27 Photos
Photo 2/27   |   2011 Jeep Grand Cherokee Limited 4 X 4 Front End
Who can blame him for being so enthusiastic? With its bold front and solid angles, the Jeep is a beauty to behold. Not overly styled or wind-tunneled to resemble a rounded elephant, the Jeep has a classic, simple look that echoes a time when SUVs earned their Western-themed names. You get the feeling this Grand Cherokee will age well.
Inside, the Jeep combines comfort with plenty of space. Leather seats with lumbar support kept fatigue at bay. In back, there is plenty of space for three average-size adults to sit comfortably with satisfactory legroom. The entertainment system offers at least a half-dozen ways to listen to music, from CD, Sirius satellite, AM/FM radio, USB, media hard drive, iPod connection, or via an auxiliary input. Overkill, maybe, but I never met a music delivery system I didn't try out.
View Photo Gallery | 27 Photos
Photo 3/27   |   2011 Jeep Grand Cherokee Limited Rear End
While other vehicles in the Motor Trend fleet were usually drafted for moving duty, I can report the Jeep handles an epic laundry run with no problem at all.
Admiration was not limited to those on staff, either. On one occasion, I gave a full-blown test drive. The prospective buyer wanted to be sure there was enough acceleration to get out of trouble on the freeway, so we took the Jeep for a spin on the 405. The SUV easily made all the passes, and it remained in the running as a future purchase. I wasn't able to close the deal, though, so no coffee for me.
With the Jeep's 24.6-gallon tank size, its observed average 17.0 mpg often allowed me to go 400 miles before I needed to fill up. Considering my 250-mile weekly work commute, I was glad to have at least a week before hitting empty. Big tanks may hurt at the pump, but at least you're not there as often, and when you buy a large vehicle, this comes with the territory.
View Photo Gallery | 27 Photos
Photo 10/27   |   2011 Jeep Grand Cherokee Limited 4 X 4 Front Three Quarter
We experienced no maintenance problems, dealing with just your normal wear and basic upkeep. The one hardware failure was a burned-out left-rear turn signal. We knew immediately because LEFT REAR TURN SIGNAL OUT flashed on the dash info display as soon as the bulb failed. Much better to find out that way than having one of California's finest point it out.
The failure occurred when Truck Trend online editor Melissa Spiering was at the helm. Being a handy young woman, she decided to change the bulb herself. She found a video on line and made the swap with ease.
View Photo Gallery | 27 Photos
Photo 11/27   |   2011 Jeep Grand Cherokee Limited 4 X 4 Rear Three Quarter
"It took about five minutes to pop out the set screws, unplug the socket, replace the bulb, set the socket back in place, do a blinker test, set the taillight back into place, and replace the set screws. Easy-peasy." Spiering explains.
And that's been the extent of our troubles. I'd say we'd take that every time.
Of course, no vehicle is perfect, and the Jeep garnered its share of minor gripes. The rearview mirror is very large (it houses multiple sensors), and it's impossible to hang a parking or handicap placard on it, resulting in a staffer getting a ticket for an improperly displayed sign. The navigation system, while in my experience was dependable, is rather artful and looks "like the palette chosen was from a Crayola box," according to a logbook comment. The center dial for the HVAC's fan control has almost no heft and feels flimsy -- something that struck me every time I used it, which was everyday. A little more weight to the dial would make a world of difference. As I said, minor gripes.
View Photo Gallery | 27 Photos
Photo 12/27   |   2011 Jeep Grand Cherokee Limited Rear Badge
During the Grand Cherokee's stay with us, we barely scratched the surface of its off-road capabilities, and the mild winter provided very little snow for us to play on. We tried! We took the Jeep all the way to Idaho in December. But highway driving? Oh, yeah, we did plenty of that. And that's where the Jeep felt really at home. Many staffers noted the smooth ride, quiet cabin, and comfortable seating -- essential for any road-trip.
As of this writing, I'm preparing to drive to Phoenix for spring training, and I wish I were making that drive in the Jeep.

- OF
By Mike Royer
21 Articles