Brute Froce: A Factory-Quality Four-Door JK Truck from the Experts 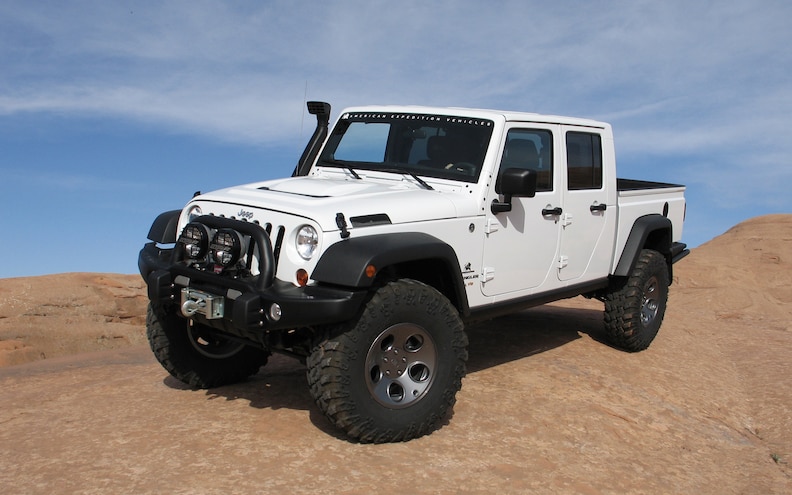 Have you ever wanted a pickup with the off-road capability of a Jeep Wrangler (JK) Unlimited, but were disappointed to find out that all the compact, midsize, and half-ton pickups for sale in the U.S. rely on an independent front suspension? The 4x4 experts at American Expedition Vehicles are creating the solution to your dilemma. The company has taken the idea of its two-door pickup based on the Wrangler TJ and are building the Brute Double Cab, a four-door JK with a factory quality pickup bed that can be purchased as a complete vehicle. If you already have a JK Unlimited, the Brute will be available as a professional conversion, too. AEV was kind enough to bring us out to Moab, Utah, during the Easter Jeep Safari to drive its vehicles and take a spin in the Brute Double Cab.
View Photo Gallery | 37 Photos
Photo 2/37   |   AEV Jeep Brute Double Cab Front End 2
When comparing the Brute Double Cab with its TJ-based predecessor, there are notable differences, in addition to those two extra doors. Not only does the new Brute get all the advancements that came along with Jeep's JK generational update -- new engine, transmission, interior, and more -- the Double Cab has totally unique DNA when compared with its two-door TJ-based older sibling. Instead of a steel pickup box like the original Brute, the new Double Cab uses a composite bed that weighs 140 pounds less than the steel bed. This allows the new Brute to tip the scales at about the same weight as a stock Wrangler Unlimited (that is, if you can resist the optional 6.4-liter Hemi swap and optional Dynatrac axles). The pickup bed is made with a high tech injection-molded composite of honeycomb core, S-glass (the strongest fiberglass available), some aluminum parts, carbon pieces, and even Kevlar.
View Photo Gallery | 37 Photos
Photo 3/37   |   The 6.4-liter Hemi engine swap is optional on the Brute Double Cab and works seamlessly, delivering about 500 hp to all four wheels. Customers will be able to order the pickup conversion even if they choose to stay with the stock Pentastar 3.6-liter V-6 Wrangler engine.

"In addition to bold new badging, the new Brute Double Cab show vehicle was equipped with the AEV rear bumper and AEV splashguards."

To make the bed fit, AEV stretches an Wrangler Unlimited with the same method Jeep uses to build two- and four-door JKs on the same platform. (Actually, you could argue AEV uses its own method, which helped inspire the Unlimited model to become a part of the official Jeep lineup.) Since both lengths of the factory JK use the same front and rear frame sections, AEV is able to add 23 inches of boxed frame rails between the front and rear wheels and a small extension at the back under the bed. The Brute is longer, wider, and taller than the Wrangler Unlimited. The cargo area and roof behind the rear seats are removed and the cab is sealed with factory precision, and still allows room for the rear seats to fold flat.
Like all complete AEV conversions, the suspension will perform like no other thanks to the intensive OEM-like research and development used to create the Dualsport suspension. AEV starts by optimizing the control arms, track arms, and steering geometry to match the suspension lift height. After that's complete, the engineers use factory-style frequency tuning of the springs, which allow the front and rear coils to oscillate in harmony and keep the tires planted to the ground in on- and off-road situations. Once that's complete, AEV teams up with Bilstein at a professional proving grounds to dial in the shock valving with a focus on damping suspension movement, which helps explain the smooth and controlled feel of the suspension lift we experienced in Moab.
View Photo Gallery | 37 Photos
Photo 10/37   |   AEV Jeep Brute Double Cab Suspension
Our first ride in a fully equipped AEV Jeep came during the snowy customer appreciation trail ride, which included two- and four-door JK Wranglers along with a first-generation TJ-based Brute. One of the first things you'll notice about an AEV-equipped Jeep is the incredibly smooth ride, even with relatively short lift kits, such as the 3.5-inch lift that can fit 37-inch tires. At first, it seemed like the suspension, which felt perfect on-road, might be mushy on the trails. It turned out all the talk about AEV founder and president David Harriton's quest for perfection in ride control is not just a bunch of hype.
View Photo Gallery | 37 Photos
Photo 11/37   |   Call of Duty video game fans may recognize the AEV Premium Front Bumper and the AEV Heat Reduction Hood. Modified versions of both parts (along with plenty of other accessories) were equipped on the COD: Modern Warfare 3 edition of the Wrangler sold by Jeep.
On the trails, what first seemed like a ride that was too soft to be true turned out to be the real deal. Small bumps are soaked up and isolated from the driver and passengers, and larger obstacles can be hit at speeds where you might expect to clunk your head on the rollbar or roof when the trail retaliates, but even bumping up a double ledge produced less cabin disruption than you'd expect from hitting a nasty speed hump in a parking lot. That's not to say there's any loss in capability when compared with more stiffly sprung Jeeps. The smooth ride is just a bonus and can even help drivers maintain control, since they don't have to compensate for unexpected chassis movements.
The Brute Double Cab we drove was not on the trail ride because the model brought to Moab is the show version of the truck, plus Harriton isn't yet satisfied with the rear suspension tuning. We did ride with him a short distance off-road for the photo session and the truck crawled just as easily as the other AEV Jeeps and the chassis felt as composed as a factory pickup, if not better. The bed never creaked or seemed to be trying to escape the rest of the truck, even when the suspension was stressed by maxing out the droop of one wheel while the others were firmly planted on flat rock.
We did drive the Brute Double Cab on-road, and the current "unacceptable" rear suspension felt more composed than most OEM pickups with an unloaded bed, and a heck of a lot smoother than an empty 3/4-ton pickup. The front suspension performed like a champ, even with the weight of a 6.4-liter Hemi V-8 under the AEV Heat Reduction hood. To protect the show truck, the engine was limited to 55 mph and well below redline, but normal driving on twisty roads and a few throttle punches on straightaways revealed the engine and Chrysler/Mercedes-Benz sourced five-speed automatic perform seamlessly with the rest of the vehicle.
View Photo Gallery | 37 Photos
Photo 18/37   |   AEV Jeep Brute Double Cab Front Three Quarter
To ensure we got the full on-road experience, Harriton arranged a ride with one of AEV's professional engineers in an AEV Wrangler Unlimited with the same drivetrain. While the engineer kept everything safe and legal, there were a few white-knuckle lane-change maneuvers. They didn't activate the stability control or produce the scary body roll you'd anticipate, which proved that when the Brute's suspension is dialed in, you wouldn't be too far off in comparing the ride to that of a sporty car. During the exhibition drive, something was said to the effect of, "You could probably drift this around a corner, but there would never be a need to do that," and, no we didn't do any drifting.
View Photo Gallery | 37 Photos
Photo 19/37   |   AEV Jeep Brute Double Cab Instrument Gauges
To buy a Brute Double Cab, you'll need to get in line, because this is bound to be a hot item. In fact, there's already a waiting list. The four-door Brute is the only front and rear solid-axle midsize pickup that's going to be on sale until 2016, which Jeep says is the earliest time to expect a factory pickup based on the next-generation Jeep Wrangler. AEV is not known for building vehicles on the cheap, but you can be confident the price will be based on the company's commitment to quality-just ask one of its many return customers.


About AEV This is not the first time AEV has transformed your everyday Jeep into a unique product with the build quality you expect to find straight from the factory. Some ways this can be achieved by an aftermarket business involve hiring the right people. While expanding, AEV began teaming up with a supplier to the Big Three, stamping and assembly company Quality Metalcraft owner, Michael Chetcuti, along with getting the support of Mike Collins from Detroit, bringing an experienced off-road sales manager and AEV customer Chris Wood into the fold, and hiring Dave Yegge, a Jeep engineer who played vital roles in Wrangler development. Like Wood, Yegge had used AEV to stretch his personal Jeep TJ years earlier, which played a role in the development of the factory's Unlimited model.
View Photo Gallery | 37 Photos
Photo 20/37   |   AEV founder and president David Harriton shows where the company adds fully boxed frame rail sections that stretch the Unlimited wheelbase by almost 2 feet. You would be hard-pressed to tell the difference between the work of AEV and the frame sections found on factory Wrangler JKs.
They aren't the only ones responsible for the success at AEV in its 15-year existence. Including Yegge, there are three Chrysler/Jeep employees with 40 years worth of experience. The company acquired Nth Degree suspension in 2007 along with the expertise of Jim Frens, one of the former Chrysler employees, who is now the AEV resident suspension engineer. Since 1997, the Missoula, Montana facility to has moved into a 7000-square-foot space and the AEV Detroit facilities have expanded into a 36,000-square-foot workspace as AEV continues to grow with its mission to make perfection the primary objective.
The original idea for the two-door TJ Brute came to Harriton when he owned two Mastiff dogs. He wanted a way to transport them while keeping the interior of his Jeep clean, and also wanted more room for cargo. Here you can see a very satisfied customer, (he wore that smile all day), driving his first-generation Brute during the AEV Customer Appreciation trail ride.
View Photo Gallery | 37 Photos
Photo 21/37   |   AEV Jeep Brute Double Truck Front Three Quarter
Company partner Michael "Chet" Chetcuti, prepared a feast that included 40 pounds of ribs and special beans by his lackey, Kent, for the AEV customer dinner. Meanwhile, the rest of the AEV family and about 20 AEV-equipped Jeeps from all over the USA followed Sales Manager Chris Wood on the annual Customer Appreciation trail ride, made more interesting by snow that had started falling in Moab the night before.
View Photo Gallery | 37 Photos
Photo 28/37   |   AEV Jeep Brute With The Group