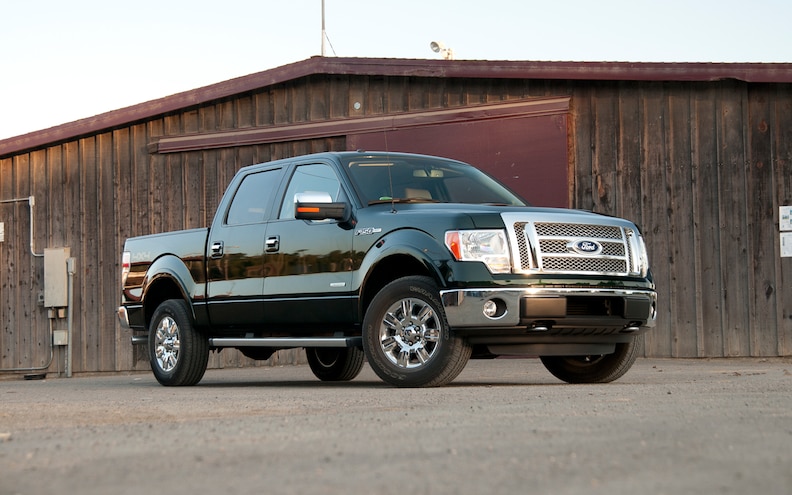 When we awarded the F-150 our Truck of the Year honors, it was for a variety of reasons, some of which being how the truck handled towing a trailer and carrying significant payload; the performance of all four engines; the range of interiors; and the wide variety of options for buyers, including axle ratios, bed lengths, wheelbases, and cab sizes. Yet even after seeing the way the EcoBoost engine excelled at TOTY, some staffers wondered how it would fare in the long run. Could it really do the same work as a V-8?
View Photo Gallery | 6 Photos
Photo 2/6   |   2012 Ford F 150 Lariat 4x4 Front Three Quarter
As is tradition, we get to try out our Truck of the Year winner for a year. For our long-termer, we got a 2012 Lariat and chose to equip the truck with the lineup's most intriguing engine, the twin-turbo 3.5-liter EcoBoost V-6. Ford is positioning this as the topline engine of the group. It produces more horsepower (365)and torque (420 lb-ft) than anything else in the line, with the exception of the 6.2-liter V-8, which is seen as a specialty engine. And, as we observed at Truck of the Year, the V-6 certainly offers the power -- and towing capacity -- of an eight-cylinder engine.

""It'll be interesting to see how the L-T F-150 fares. We know it's fast and capable, but is its mpg as good as the EPA numbers suggest?""

We equipped our truck to be ready for anything most owners would throw its way, from the comfort of the city to the dirt and grime of a work site. We got the 5-foot box with a drop-in bedliner, four-wheel drive, trailer tow package, trailer sway control, and the oh-so-cool tailgate step. The truck comes with plenty of goodies inside, too, like Sync, navigation, power heated and cooled leather seats, and a driver information center that will let us keep track of the truck's vitals, such as key temperatures, fuel economy, and off-road status. When all was said and done, the as-tested price for the F-150 was nearly $50,000.
View Photo Gallery | 6 Photos
Photo 3/6   |   Will traditional truck buyers accept a twin-turbo V-6? Probably. The 3.5L EcoBoost makes 365 hp and 420 lb-ft, eclipsing the 5.0-liter V-8's output.
We are eager to spend a year using the F-150 hauling payload, towing, commuting, taking long trips, and going on some off-road adventures. We want to see how the F-150 performs all these tasks, and whether the EcoBoost is as ready for day-to-day work as the V-8s are. Another thing we noted at TOTY was that the EcoBoost did not achieve significantly better fuel economy than a 5.0-liter V-8 that was also a participant. Was that an aberration, or can EcoBoost owners expect the same from their trucks? We'll let you know what we discover.