Crisp on the Outside, Fluffy on the Inside 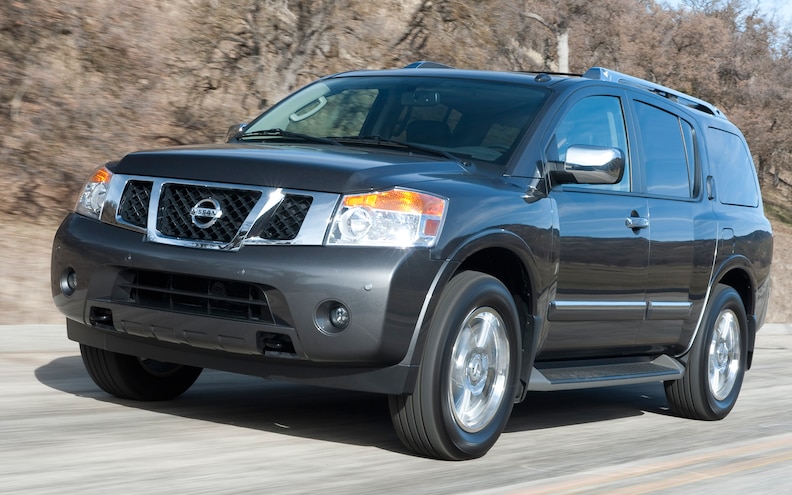 It's hard to believe that the same company that builds the 2012 Nissan Armada also builds the Leaf. Its overall configuration, packaging, and mechanicals seem like they've come from a decade ago. In Nissan's current lineup, the Armada stands out as a symbol of the "old" Nissan that sought to counter Detroit model for model, even when long-term trends indicated the days of the full-size SUVs were coming to an end.
View Photo Gallery | 10 Photos
Photo 2/10   |   2012 Nissan Armada Front View In Motion
Because it plays in a relatively small segment where the competition is not that fierce, the Armada's dated nature does not stand out to the same extent as it does with the Titan on which it's based, but it's certainly showing its age. The available tech features as well as the user interface as a whole are hopelessly dated. The "Music Box," for example, may have been cutting edge in 2008, but today, the compact flash medium it uses has been largely abandoned by almost everyone; voice control for the Bluetooth calling and navigation functions does not include voice commands for radio tuning; and the tuning knob for the audio controls is a far reach across the Armada's expansive dashboard, which is the only discernible way to tune in a non-preset station.
View Photo Gallery | 10 Photos
Photo 3/10   |   2012 Nissan Armada Interior
As dated as the Armada's controls and interface are, they're a marked improvement from the Titan's nearly decade-old interior. Part of the refresh the Armada received for 2008 was the addition of soft-touch dashboard padding along with a smoother, more elegant dashboard design than the Titan's Rubbermaid interior theme, yet Nissan could have taken the interior refinements a step or two further. Just as in the Titan, the gated console shifter thwacks loudly through its detents, reminding you that the hard plastic lower console did not get the soft-touch treatment.
If you're not turned off by the occasional rough edge here and there, the Armada's Platinum trim certainly delivers the goods in terms of content, with a rear-seat DVD system with wireless headphones, rear-seat audio and climate controls, a power liftgate, and driver's memory seat and exterior mirrors.
View Photo Gallery | 10 Photos
Photo 7/10   |   2012 Nissan Armada Wheel
It would be easy to gang up on the Armada's 5.6-liter Endurance V-8, which was near the head of the class eight years ago, if the Ford Expedition had the new 5.0-liter V-8 or EcoBoost V-6 under the hood, but the Expedition is still soldiering on with essentially the same engine it's had for the last six years.
Aside from being one ratio short of the now class-standard six-speed automatic, the engine and five-speed automatic do an admirable job of motivating the almost 3-ton Armada, serving up ample low-end torque for effortless around-town driving and highway cruising. The only time the engine's dated tuning shows itself is during wide-open-throttle acceleration and passing, when the 5.6-liter V-8's low 317-hp peak output manifests itself. Our test of a mechanically identical 2008 model gave us a 0-60 time of 6.8 seconds. Where the powertrain truly betrays its age, however, is in fuel economy: Its 12 mpg city and 18 mpg highway figures trail the segment leaders by 2-3 mpg.
View Photo Gallery | 10 Photos
Photo 8/10   |   2012 Nissan Armada Rear Badge
The rest of the Armada's driving experience holds no surprises -- or rewards, for that matter -- for the driver. The suspension is soft and compliant; one member of my carpool described the ride and interior accommodations as "fluffy," which seems an apt description of the overall experience on the inside of the Armada. The seats are soft and flat, front and rear, and the powertrain and suspension NVH levels are noticeably quieter than in the Titan. The Armada would make a fantastic long-distance road trip companion, with ample room, comfort, a soft ride, and a quiet interior.
View Photo Gallery | 10 Photos
Photo 9/10   |   2012 Nissan Armada Right Facing
The Armada's chiseled, angular exterior is little changed from when it was introduced along with the Titan in 2004. Sure, the grille and front end have altered slightly over the years, but the straight-edged profile broken up by an arching roofline is pretty much the same as ever. You won't find LED driving lights, taillights, HID headlights, or other high-tech illuminative frills here.
View Photo Gallery | 10 Photos
Photo 10/10   |   2012 Nissan Armada Front View
There may not be much of a "wow" factor to the Armada, but it does deliver the typical attributes most customers shopping the full-size SUV segment are seeking: comfort, capability, and family-friendly features. For its as-tested price of $55,850, however, there are more compelling options in the class.