Subtle Changes to a Proven Formula 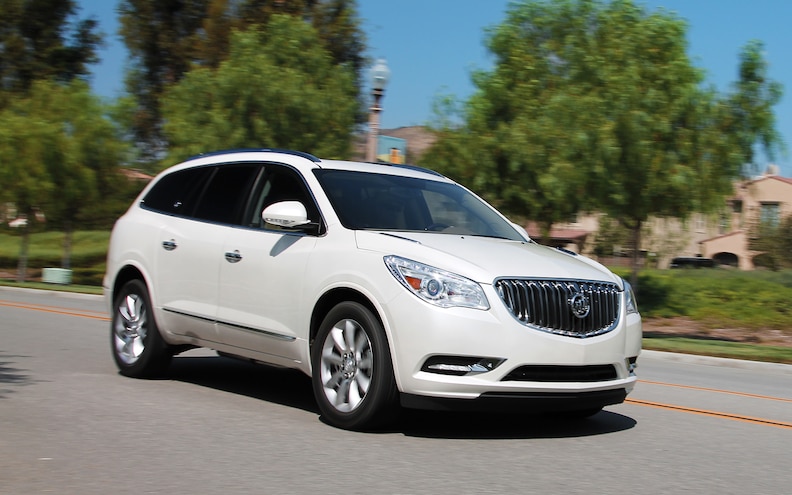 We don't often get the chance to test successive model year vehicles close to one another, but when we do, we gain an insightful look into the evolutionary changes on a model that's just undergone a refresh. The most recent example is the 2013 Buick Enclave, which we tested just a few weeks ago after testing the 2012 model. We praised the older crossover for its solidity, quietness, and roominess, but we also noted it was overdue for a freshening. Well, here it is.
View Photo Gallery | 38 Photos
Photo 2/38   |   2013 Buick Enclave Rear View 06
On the outside, Buick has endowed the 2013 Enclave with some strategic nips and tucks to bring its styling more in sync with the rest of the lineup. The most noticeable changes on the outside of the Enclave are the new grille and headlights. While it's instantly recognizable as an Enclave, the new LED running lights and eyebrows give it a more upscale look. The vestigial venti-ports remain on the hood, but are moved from the edge of the "power dome" to the top. We're not generally fans of non-functional styling gingerbread, but as exterior jewelry goes, it's one of the less egregious examples.
View Photo Gallery | 38 Photos
Photo 3/38   |   2013 Buick Enclave Side View 02
A few exterior changes we do appreciate more are the discreet application of the Buick tri-shield logo to the C-pillar, and the subtle tri-shield logo within the taillight reflectors. The integrated exhaust outlets in the rear bumper also give the Enclave a more contemporary image, although looking a little further inward reveals a standard-issue, non-polished pipe, but this is no different from how most other manufacturers do integrated exhaust outlets.
Changes are bigger on the inside. Noticeable right away is a sweeping aquamarine accent light that stretches across the width of the dashboard and the top of the front and rear doors. Save for a few inches around the outer edges of the dashboard and the front of the doors, it forms a neat and continuous arc. The 2013 model also makes more judicious use of woodgrain trim, which is applied more liberally to the door panels but more sparingly on the dashboard.
View Photo Gallery | 38 Photos
Photo 10/38   |   2013 Buick Enclave Interior View 11
The satin faux-metal of the 2012 has been permanently banished and we can't say we miss it. The center vent housing with the central analog clock returns, but with a more cohesive and elegant continuous chrome surround. The most appreciated changes, however, are to the climate controls. Last years' flat buttons are replaced with two knobs accented with brightly lit LED temperature readouts. They're immediately intuitive and a step forward in ergonomics and design.
View Photo Gallery | 38 Photos
Photo 11/38   |   2013 Buick Enclave Interior View 08
As big an improvement as the interior changes on the 2013 model are, there are a few small let-downs. We noted with surprise that our well-equipped 2012 tester still had a conventional key at a $50,000 price point. The 2013, likewise, has a twist-it-yourself ignition. Speaking with the chief engineer for the Lambda platform vehicles at a recent event, it didn't sound like a push-button ignition was on the immediate horizon, but Buick is aware of the perception issues in a premium-priced vehicle, especially since many of the brand's more recently introduced models feature a push-button start. Finally, and this is getting into nit-picky territory, the shifter still has a sliding plastic cover instead of the more common gated or leather-shrouded shift boot on many upscale models.
View Photo Gallery | 38 Photos
Photo 12/38   |   2013 Buick Enclave Interior View 13
Although mechanically nearly identical to our 2012 tester, the 2013 model was noticeably slower at the track, posting an 8.5-second 0-60-mph run -- a full second slower -- and was 0.8 second slower through the quarter mile. The fact that our 2013 test vehicle had fewer than 1000 miles on the odometer could have had something to do with it. From behind the wheel during normal driving, there was not a major perceptible difference in performance and acceleration between the two models.
We were able to take the 2013 Enclave down some canyon roads and drove it aggressively enough that several cars in front of us pulled off to let us past. Once we had an opening, we drove the Buick hard enough through the turns that a particularly persistent Volkswagen Jetta behind us maintained a respectable trailing distance, either astounded that such a large vehicle could handle so well or lacking the skill or confidence to push his own car that hard.
View Photo Gallery | 38 Photos
Photo 19/38   |   2013 Buick Enclave Front View 03
Whether by virtue of Buick's QuietTuning or our tester's grippy tires, we rarely heard any tire squeal. It may not be in the same league as the athletic Mazda CX-9, but the Enclave can hustle through the curves when asked.
View Photo Gallery | 38 Photos
Photo 20/38   |   2013 Buick Enclave Side View 01
Has the 2013 refresh fixed all the "problems" with the 2012? No, but as we noted in our review of that model, the Lambda platform is so fundamentally sound that even after five years on the market, the Enclave still stands as one of the best all-around examples of a premium three-row crossover that we can think of. Admittedly, the Lambdas are on the heavier side of the class, something even GM acknowledges in light of newer, lighter-weight competitors. And, as before, fuel economy could be a little better.
If you're considering something like the Lexus RX 350, but need the occasional seven-passenger capacity, or the new Infiniti JX35, but want something just a tad roomier, the Enclave is still a classy, comfortable choice that holds up well against newer competitors.