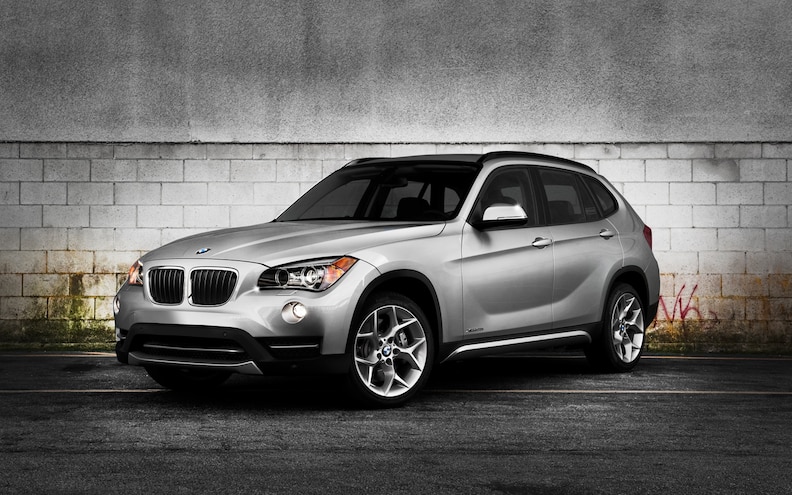 For slavish followers of the hip and trendy, the 2013 BMW X1 may push all the right buttons. Although its profile suggests wagon, it skillfully avoids that stigma by having a ride height slightly taller than a car. Its long hood and low roof convey sportiness, and its modest cargo capacity, especially relative to the X3, definitely emphasizes "sport" over "utility." It's sportier and more nimble than your typical SUV, but categorically not a conventional wagon.
View Photo Gallery | 36 Photos
Photo 2/36   |   2013 Bmw X1 Xdrive 28i Rear
Head-scratching product-positioning aside, how does BMW's the X1 fare on its own merits? Well, it emphatically feels like a BMW, even more so than some of the brand's more recent mainstream models. The engine and road feedback are clearly audible and tangible, but not in an intrusive or annoying sense. Like BMWs have for decades, the X1 balances responsive, athletic handling with excellent small-bump compliance and transitional composure.
View Photo Gallery | 36 Photos
Photo 3/36   |   2013 Bmw X1 Xdrive 28i Front
We tested both versions of BMW's smallest crossover. The X1 28i is powered by BMW's new N20 2.0-liter direct-injected turbocharged four-cylinder engine that produces 240 hp and 260 lb-ft of torque. BMW is justifiably proud of this engine's adept balance of power and efficiency. It is more powerful than its naturally aspirated six-cylinder predecessor and is considerably more fuel efficient. However, as installed in the X1, the N20 does not replicate the subjective experience of BMW's famed six-cylinders.
Powering the X1 35i the N55 3.0-liter turbo inline-six. Despite the prominent TwinPower logo on the engine shroud, this engine employs a single turbocharger; unlike its predecessor N54, though the two generations of the turbo six have identical power outputs of 300 hp and 300 lb-ft of torque. Although you can hear the whistle and whine of the turbo occasionally, far more noticeable is the appropriately boisterous inline-six exhaust note.
View Photo Gallery | 36 Photos
Photo 10/36   |   2013 BMW X1 Front Three Quarters
Cold startup in the 28i, as with many other direct-injected four-cylinders, is rather clattery. At idle, it sounds a bit diesel-like. The exhaust note is clearly that of a four-cylinder, but the N20 unequivocally delivers the goods, producing meaningful torque from below 2000 rpm and keeping it coming well above 5000. The eight-speed automatic hustles through gears quickly, and before you know it, you're well above the posted limit, whether you're in town or on the highway. Our tester's 0-60 time of 6.4 seconds and sub 15-second quarter-mile run is a testament to this powertrain's fleetness.
View Photo Gallery | 36 Photos
Photo 11/36   |   2013 BMW X1 Side In Motion
As would be expected of 50 percent more displacement and cylinders, the 35i delivers even more abundant accelerative force, chopping more than a second off the 28i's time, with 0-60 coming in just 5.3 seconds. The six-cylinder's edge in the quarter mile is slightly less decisive, being 0.8 second quicker with a 4.8-mph-higher trap speed. Unlike the 28i, the 35i's transmission has only six speeds, and has a traditional sliding shift lever rather than the 28i's robo-stick toggle shifter.
One somewhat annoying attribute of the X1 28i is the auto stop-start function, which, unlike other BMW models fitted with it, has no easily discernible way to defeat or override. The option may be buried somewhere deep in the iDrive menu, but there's no button on the dash to defeat it. The 35i doesn't have auto stop-start, and doesn't subject the driver to the same abrupt jolts at stoplights.
View Photo Gallery | 36 Photos
Photo 18/36   |   2013 Bmw X1 Xdrive 28i Front View In Motion
We noted that the X1 falls a little short in the traditional SUV categories of utility and practicality, and compared with its more mainstream sibling, the X3, this is the case. With the rear seats up, the X3 out-hauls the X1 by a more than two-to-one margin, with 30 cubic feet versus the X1's 14.8. Fold the second-row seats, and the gap narrows, but still favors the X3 by a substantial margin, 71 versus 47.7 cubic feet. Even the upcoming 328i wagon, which will go on sale in the U.S. market this spring, offers greater cargo versatility, with 27 cubic feet with the rear seat up, and 66 folded. So if you're seeking maximum hauling capacity, look elsewhere.
View Photo Gallery | 36 Photos
Photo 19/36   |   2013 Bmw X1 Xdrive 28i Rear View
If you're intrigued by the X1's unconventional long-hood proportions and packaging, it could be a compelling buy. BMW has priced it attractively, with the rear-drive sDrive 28i starting at just $31,545, including destination. The all-wheel-drive xDrive 28i isn't much more at $33,245. For comparison, a MINI Cooper S Countryman All4 with the Technology Package and automatic transmission comes to $32,450. And the starting price comes in substantially less than the similarly-sized, but mechanically and conceptually different Range Rover Evoque, which starts at $41,995.
View Photo Gallery | 36 Photos
Photo 20/36   |   2013 BMW X1 Wheels
As with most BMWs, the price can quickly inflate with the addition of options. Our tester was loaded with more than $11,000 of goodies over the base X1 xDrive 28i, equipped with the Premium, Cold Weather and Driver Assistance packages, among others. The price spread on the 35i was less gaping, but the final tally of $47,495 doesn't exactly qualify it for bargain status, either.
View Photo Gallery | 36 Photos
Photo 21/36   |   2013 BMW X1 Gear Shifter
Buying the X1 because it's cool-looking, offers a proper BMW driving experience, and delivers reasonably good fuel-efficiency is a perfectly legitimate purchase rationale. But buying it for its utility may leave you wishing you'd brought your tape measure on the test drive.