Full-Size Vans, By The Numbers

Who Sells The Biggest Rolling Storage? 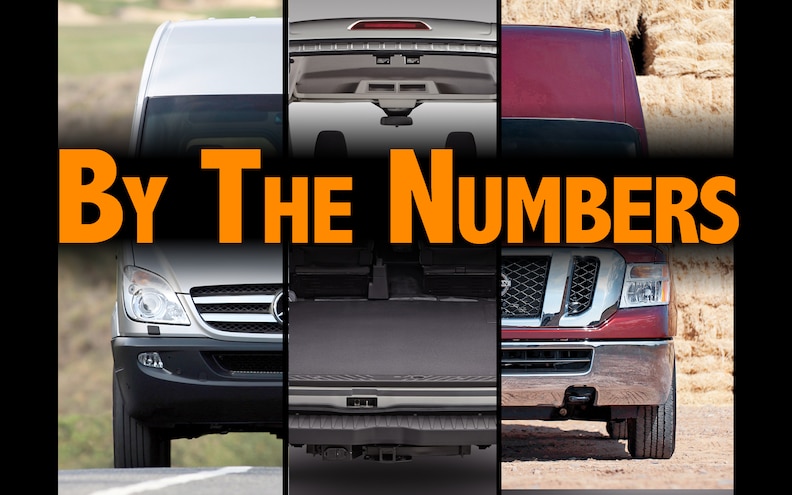 
Nissan NV 2500/3500 HD
Most Powerful Available Engine: 5.6L V-8, 317 hp, 385 lb-ft torque
Maximum Cargo Volume: 323.1 cubic feet
Maximum Cargo Length: 120 inches
Maximum Cargo Height: 76.9 inches
Width Between Wheel Wells: 54.3 inches
View Photo Gallery | 44 Photos
Photo 23/44   |   2012 Nissan NV Side Views
Somewhat similar to the approach Nissan took with the Titan, there are only a limited number of configurations available on the NV, relative to the myriad configuration options available for both the Sprinter and Transit. There's only one wheelbase and overall length, but buyers do get the option of standard- or high-roof configurations. For the largest model, the full-size NV comes in well behind the Transit and Sprinter, but ahead of the E-Series and the two GMs. The NV does have the distinction of having a greater width between wheel wells than the Sprinter and it's also more powerful that the German workhorse, though it'll likely fall short of Ford's high-tech EcoBoost.


Mercedes-Benz Sprinter
Most Powerful Available Engine: 3.0L turbodiesel V-6, 188 hp, 325 lb-ft torque
Maximum Cargo Volume: 547 cubic feet
Maximum Cargo Length: 185 inches
Maximum Cargo Height: 78.2 inches
Width Between Wheel Wells: 53.1 inches
View Photo Gallery | 44 Photos
Photo 30/44   |   2010 Mercedes Benz Sprinter 2500 Front Three Quarters
The Sprinter is the proven veteran among the tall-roof set and its reputation as a utilitarian workhorse is reinforced by its commanding lead in overall cargo volume over the rest of the field at a capacious 547 cubic feet. Mercedes offers the Sprinter in two wheelbases and three overall lengths, maxing out at a staggering 289.2-inches in length. For perspective, that's longer than two Mini Coopers parked nose to tail and more than two feet longer than a Ford F-350 Super Duty Crew Cab longbed. When it comes to stuff capacity by volume, the Sprinter rules in this segment. However, it has the weakest engine, its 3.0-liter turbodiesel V-6 making a mere 188 hp and 325 lb-ft of torque.

Ram ProMaster
Most Powerful Available Engine: 3.0L turbodiesel I-4, 174 hp, 295 lb-ft torque
Maximum Cargo Volume: 529.7 cubic feet
Maximum Cargo Length: 160 inches
Maximum Cargo Height: 85.5 inches
Width Between Wheel Wells: 55.9 inches
View Photo Gallery | 44 Photos
Photo 37/44   |   2014 RAM ProMaster Passengers Side Front Three Quarters
When it debuted, many critics said how homely the ProMaster (and by extension, the Fiat Ducato) was. But let's be honest, nobody buys these vehicles for their beauty. The true beauty of cargo vans is in their versatility, and there's no question the ProMaster shines. Ram has not officially released cargo volume data for the ProMaster, but based on some online sleuthing and some metric conversions, we were able to figure out the key interior dimensions of the ProMaster, going on the premise that they're essentially identical to the Ducato. What we found was eye-opening. Although just shy of the Sprinter's maximum capacity of 547 cubic feet, the ProMaster tops the largest Transit by more than 30 cubic feet. European customers can order an even more cavernous Ducato that holds a massive 600 cubic feet!
The ProMaster's unique front-drive layout puts it on top of this class in maximum cargo height at 85.5 inches, and the largest width between wheel wells at 55.9 inches. The ProMaster's literally almost true-vertical sides maximize the usEable available space inside. On paper, the ProMaster's modest diesel power of 174 hp and 295 lb-ft of torque (a 280-hp gasser is also available) puts it near the bottom of the list in power output, but that torque peak is delivered at a low 1400 rpm, mated to a transmission with an ultra-short 4.56 final drive, so around-town performance should be plenty spunky.
View Photo Gallery | 44 Photos
Photo 38/44   |   2014 RAM ProMaster Rear Three Quarters With Doors Open