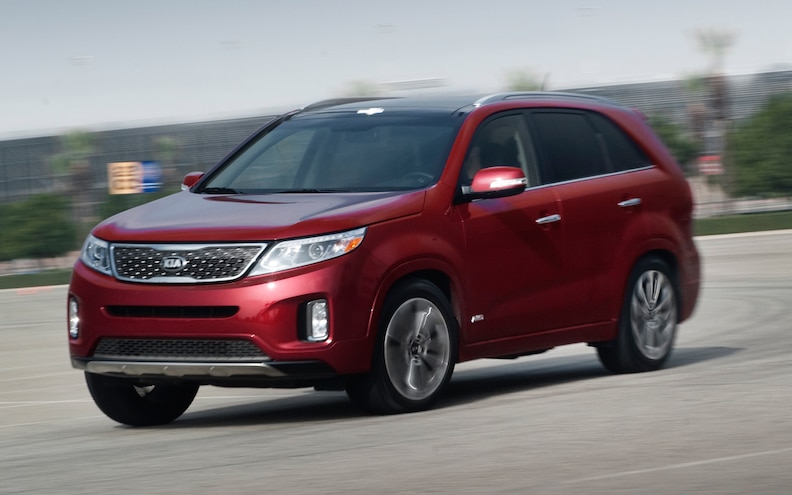 Typically, vehicle refreshes consist of visible, obvious changes to the exterior, and mostly carryover dirty parts. The 2014 Toyota Tundra is a textbook example of this, as is the 2013 Chevrolet Traverse. Kia has bucked this trend with the 2014 Sorento, bringing what is arguably an all-new chassis to market with only subtly-changed style. To the casual observer, the 2014 Sorento looks like a mid-cycle refresh, with revised, thinner-profile LED combination taillights, and the obligatory LED eyebrow accent lighting in front on the upscale SX model. Even on the inside, it takes a sharp eye and a few minutes of orientation to pick out the changes. Don't let these familiar looks fool you, Kia did not skimp on the updates for the new Sorento is as legitimately an "all-new" model as anything else in its class. In fact, Kia is claiming 80 percent of the parts on the 2014 Sorento are new or significantly redesigned.
View Photo Gallery | 16 Photos
Photo 2/16   |   2014 Kia Sorento SX AWD Front Three Quarters
One of the biggest changes is the replacement of last year's 3.5-liter port-injected V-6 with Hyundai/Kia's new corporate 3.3-liter direct-injected V-6 that's also used in the Hyundai Azera, upcoming Kia Cadenza, and 2013 Hyundai Santa Fe. The power gains are not drastic, with the new engine producing 14 more hp and 4 lb-ft more torque than last year's mill. The 2014 model also posts exactly the same EPA figures as last year's model..
View Photo Gallery | 16 Photos
Photo 3/16   |   2014 Kia Sorento SX AWD Rear View
The new V-6 powers the Sorento with ample verve, posting a 0-60 time of 7.3 seconds -- three-tenths quicker than the last Sorento AWD V-6 we tested. However, as is often the case with downsized engines, the 3.3 GDI needed to be revved to really get things moving, especially against our tester's 4171-lb weight. The transmission sometimes kicked down more often than we expected, although we commend Kia's powertrain engineers for making it relatively responsive in downshifting.
Aside from the 2014 Sorento's accelerative prowess, the rest of the driving experience is fairly typical of a midsize SUV, but with the heft and refinement that you might expect of a larger, more premium model. Our first impression upon grabbing the wheel was that the steering was overboosted and too loose, making us feel as though we were piloting a mid-70s Cadillac. Then we discovered the FlexSteer button on the steering wheel and selected the "Sport" setting, which gave the steering a more appropriate weight. We also tried out the "Normal" setting, but preferred the deliberate gravitas of Sport. We're still somewhat puzzled as to why the Sorento has this feature, other than the fact that switching to electric power assist for the new model enabled the functionality. If it were up to us, we'd lock it into Sport and be done with it.
From the driver's seat, the Sorento is a mix of upscale and mass-market features and materials. Our SX model had driver's memory seat, heated and cooled front seats, a touchscreen display featuring Kia's new UVO eServices, and a new TFT speedometer display that features a virtual needle-and-numbers view that changed to italics when the shifter was slid over to manual mode. Like FlexSteer, we feel that detail is slightly gimmicky, but with the enabling technology there, why not?
View Photo Gallery | 16 Photos
Photo 10/16   |   2014 Kia Sorento SX AWD Front Grille
The trim on our SX model was a moody dark woodgrain, almost bordering on a piano black gloss, but with a very subtle visual grain applied to it. Dashboard styling is clean and contemporary, but we were a little disappointed to find out, upon rapping our knuckles on the dash top, that it's still hard plastic. Yes, there is grained matte finish that keeps it from being automatically put in the dreaded "Rubbermaid" category, but nonetheless, it is a bit of a disappointment, especially considering our tester's $38,550 price.
While in motion, we found that road noise is agreeeably isolated and impact compliance is impressive. Chalk that up to the Sorento's revised front suspension, new front subframe, and new multi-link rear suspension design with updated bushings and mounts that improve the ride and NVH characteristics while also improving cargo space.
View Photo Gallery | 16 Photos
Photo 11/16   |   2014 Kia Sorento SX AWD Headlight
We are a bit puzzled that with as much engineering effort that was put into the 2014 model, Kia didn't extend the wheelbase of the Sorento a few inches. Unlike corporate cousin Hyundai, which made a separate, longer-wheelbase model for its seven-passenger Santa Fe, Kia stuck with the same 106.3-inch wheelbase as the 2013 model -- and the same as that of the short-wheelbase Hyundai Santa Fe Sport, which is strictly a 5-passenger model. Consequently, the third-row accommodations in the Sorento are as snug as they were on its predecessor, strictly suitable for grade schoolers. The third row is there in a pinch, but consider it for "emergency use only" unless your passengers are gymnasts under five feet tall.
Being Kia's third-best seller behind the Optima and Soul, there's clearly a lot riding on the Sorento for the brand. The improvements in refinement and technology on the 2014 model are definitely worthwhile, and make it as competitive as ever against its arch-rival, the Toyota Highlander, a model which it's been running neck-and-neck in the sales race for the better part of two years. Aside from a cramped third row, the 2014 is a substantial, if outwardly subtle upgrade from its predecessor that will please Sorento loyalists as well as newcomers to the brand.