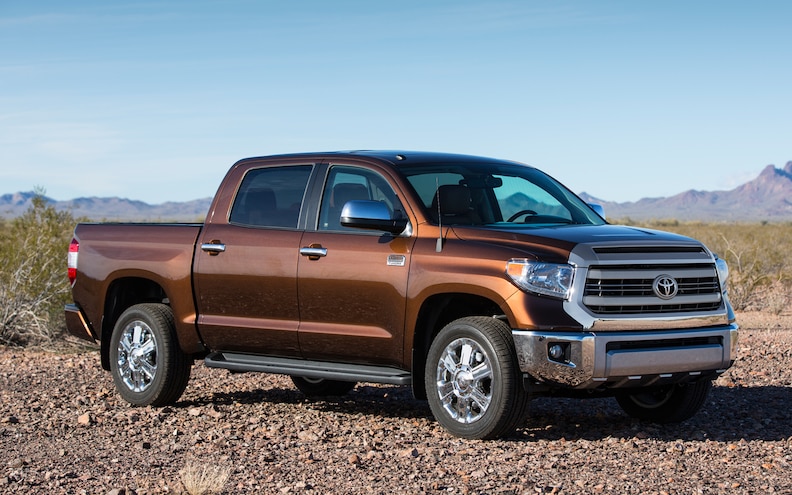 Toyota confirmed a new Tundra would be appearing at the 2013 Chicago Auto Show just a few weeks ago and although we've reported previously that a new Tundra might be coming in 2014, the flurry of speculation and spyshot activity that surrounds the run-up to a new truck, like the sort that accompanied the 2014 Chevrolet Silverado and GMC Sierra, was conspicuously absent. Now we know why. The 2014 Toyota Tundra, though fairly extensively refreshed, is still the same old Tundra. Many were hoping for or expecting more significant changes in the face of mounting competitive pressure from the domestic entries, but powertrains carryover from the 2013 models, with most of the changes coming in the form of new equipment and trim levels.
The Underhood Story
View Photo Gallery | 17 Photos
Photo 2/17   |   2014 Toyota Tundra TRD 4x4 Front View
In short, there is no story. The 4.0-liter V-6, 4.6-liter V-8, and 5.7-liter V-8 all carry over with the same power ratings and transmissions, which are a five-speed automatic for the V-6 and six-speed automatics for the V-8s. We certainly had no beefs with the 381-hp output of the top-dog 5.7-liter iForce V-8, but its fuel economy ratings fall short of the class-leading EcoBoost V-6 and GM Vortec 5300, which will soon make way for GM's new fifth-generation EcoTec3 direct-injectied 5.3-liter engine, which promises a further improvement in economy. Toyota made no reference to any changes in fuel economy, so we're assuming the 2013 figures of 13/18 mpg city/highway for the 4x2 model and 13/17 mpg for the 4x4 model will carry over for the 5.7-liter engine, as well as the other engines.
Toyota has upgraded the steering system to improve stability and the shock absorbers receive new valving to improve ride quality. Also improving stability are patented aerodynamic stabilizing "fins" on the exterior rearview mirrors and taillights, designed to reduce air turbulence and improve stability while towing.
Bigger, Bolder Look
View Photo Gallery | 17 Photos
Photo 3/17   |   2014 Toyota Tundra Front View
As indicated by the spyshots we saw recently, the 2014 model Tundra definitely brings a little more swagger to the styling department. As anticipated, the new grille has a modified hexagonal shape though all grilles retain the faux vent strip near the top. Depending on trim, the grille has either a more industrial look with the Toyota logo sandwiched between two prominent horizontal accent strips or a more upscale-looking chrome grille with four split horizontal accents. The grille juts out on the bottom, and tops off a more square, angular bumper with a lower grille opening, and on some models, outboard-mounted fog lights. The Tundra Platinum and new 1794 Edition also feature LED daytime running lights.
Accompanying the new grille are new front fenders with a prominent crease that follows the top line and tapered lower corner of the headlights, which creates a square-looking front fender. Around back, the Tundra's bed gets a little more character with more sharply-creased fenders, and a new taillight design. A new tailgate features an embossed "TUNDRA" as well as a lip spoiler integrated into the upper edge of the tailgate for improved aerodynamics.
Interior: Focus on Function
View Photo Gallery | 17 Photos
Photo 4/17   |   2014 Toyota Tundra Dash
The most significant changes on the 2014 Tundra come in the form of interior updates. Like the exterior changes, the predominant theme is angular. The subtle curves of the outgoing model have been replaced with more creased elements, the notable exception being the HVAC vents, which go from rectangular to circular. The sunken, recessed cylindrical gauges on the 2013 make way for a flatter cluster, which also incorporates a central multi-function display.
Toyota listened closely to its customers, and incorporated their suggestions into some of the feature changes. Both Double Cab and CrewMax models will be available with a front bench seat and the reach to the HVAC and audio controls has been reduced by 2.6 inches, a welcome improvement in the Tundra's vast cabin. CrewMax models also get new front and rear seat designs with a particular focus on improving front seat ventilation. Front seats were given additional travel and the CrewMax rear seats now fold up for additional cargo versatility.
Trim: From Plain to Plush
The 2014 Tundra gets five trim levels: the entry-level SR, bread-and-butter SR5, Limited, Platinum, and new 1794 Edition. The numerical significance of the trim is that was the date on which the ranch that the Tundra's San Antonio, Texas plant is located on was originally founded. Not quite "King Ranch" or "Long Horn," but we'll give Toyota points for trying.
View Photo Gallery | 17 Photos
Photo 5/17   |   2014 Toyota Tundra Front Grille 01
The Platinum and 1794 Edition models are both variations on the same theme, namely, loaded. Both models feature generous amounts of leather trim, heated and ventilated front seats with driver's side memory, a four-way power passenger's seat, parking sonar system, display audio with navigation, Entune, and a 12-speaker JBL audio system. Wheels are 18-inch on the SR and SR5 models, and 20-inch on the Platinum and 1794 Edition, which each get unique wheel designs.
All 2014 Tundras get a blind spot monitor with rear cross-traffic alert, standard backup camera, and Bluetooth hands-free calling. Pricing was not announced for the 2014 Tundra models, but will likely come closer to the Tundra's target introduction date of September 2013.

Truckin
Truckin
Toyota Tundra Exterior Upgrades from Addictive Desert Designs, Rigid industries and Warn
Check Out The Rest of This Trail-Ready Tundra! Trail Ready Tundra: Part O...
Jeremy Cook – Jul 7, 2020
Truckin
Truckin
Toyota Tundra Suspension Lift with BDS, Fox & Fuel
We don’t get to do a lot of Toyota tech around here. It’s not because we don’t want to. We lov...
Jeremy Cook – Jul 6, 2020
Truck Trend
Truck Trend
Daily Driven: 2018 Toyota Tundra Limited
If ever there were a vehicle in need of an overhaul Toyota’s Tundra would be it. With its last maj...
Jason Gonderman – Jul 12, 2019
Truck Trend Network
Truck Trend Network
Toyota to Base Next-Generation Tacoma and Tundra on the Same Platform
Toyota will base the next-genTacoma and Tundra on the same platform—cod...
Brett T. Evans – Apr 8, 2019
Join Our FREE Truck Trend Network Newsletter