Crunching the Numbers on the Small Stuff Movers 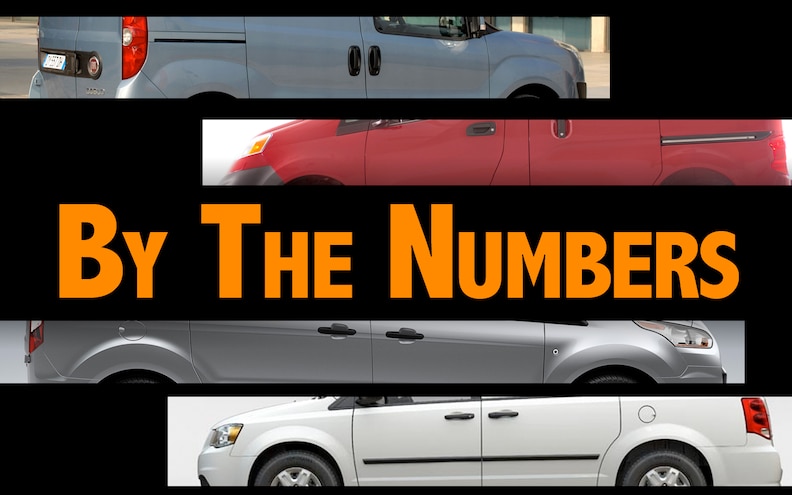 With the recent debut of the new Ram ProMaster, much of the focus in the van market has been on the full-size models and their studio apartment-sized cargo areas. But not all businesses have the need for that much cargo capacity. Many have needs that are greater than the typical small or midsize SUV, but not as big as a fullsize van. Fortunately, there are several on the market that meet those hauling needs.
The standard-bearer for the small hauler class in the U.S. is the Ford Transit Connect, and with a full top-to-bottom redesign coming for the 2014 model year, Ford shows no intentions of relinquishing that position. The Blue Oval is not alone in the segment, however -- Nissan just unveiled the U.S.-spec NV200 compact van in Chicago, which closely matches the Ford's dimensions and capacities in a more affordable, more basic package.
View Photo Gallery | 32 Photos
Photo 2/32   |   By The Numbers Compact Cargo Vans
More intriguing in this market is Ram. Currently, Chrysler's truck brand sells the Ram C/V, essentially a gutted Dodge Grand Caravan. With its brawny 3.6-liter Pentastar V-6, the C/V will likely be the choice of leadfooted delivery boys, but because it's an adaptation of an existing passenger model rather than a clean-sheet design optimized for commercial duty, it's a bit of a compromise. But those looking for a more economical and optimized vehicle from Ram may not have to wait much longer.
Much like the ProMaster is an Americanized Fiat Ducato, Chrysler has already confirmed that the smaller Fiat Doblo will be making its way across the Atlantic soon as well. Although not confirmed, some reports say the name has already been picked: ProMaster City. As with the ProMaster, there will probably be some detail changes in the Doblo's configurations, options, and powertrains in its transition to Ram-hood, but put a cross-hatch grille on it you'll get a good idea of what you'll see probably less than a year from now.
2014 Ford Transit Connect Van
Although first unveiled at the 2012 Los Angeles Auto Show, Ford has still not fully released official specifications for the 2014 Transit Connect. We know the basic dimensions (length, wheelbase, passenger room on the Wagon model) and approximate cargo volume, but we don't have precise, official measurements for interior width, length or height. We also don't know the precise power output figures, although we can deduce ballpark numbers from other models equipped with similar powertrains. Nissan, meanwhile, has disclosed all of those key specs for the NV200. We have a feeling Ford is holding back a little until both the NV200 and new small Ram dimensions have been announced, and then...surprise...disclose that the Transit Connect has more cargo volume than both of them! But, if Ram brings over the largest and tallest Doblo, the surprise will be on Ford.
View Photo Gallery | 32 Photos
Photo 3/32   |   2014 Ford Transit Connect Van Front View 05
Engines/Transmission:
2.5-liter DOHC 16v I-4, 165 hp, 168 lb-ft torque (est)
1.6-liter turbocharged DOHC 16v direct-injected I-4, 175 hp, 180 lb-ft (est)
6-speed automatic


Nissan NV200
Nissan's gameplan with the NV200's is all about value, with its pricing undercutting even the outgoing 2013 Transit Connect. As we noted in our First Look, the NV200 is a simpler, more straightforward machine than the Ford that's fitted with a more basic suspension design, and a basic cabin with just two speakers for the sound system. Nissan probably figured that was plenty for a driver to listen to his sports and talk shows while making the rounds. The NV200's power output figures of 131 hp and 139 lb-ft of torque are close to the outgoing Transit Connect's 136 hp and 128 lb-ft of torque.
View Photo Gallery | 32 Photos
Photo 10/32   |   2013 Nissan NV200 Van Front
Engine/Transmission:
2.0-liter DOHC 16v I-4, 131 hp, 139 lb-ft torque
Continuously-variable automatic


Ram C/V
The Ram C/V, while capable in its own right, and certainly plenty powerful with the 3.6-liter Pentastar V-6, is somewhat of a stop-gap product until the arrival of the Doblo-based compact Ram van. Its specifications are competitive for the class, especially in towing, where its 3600-lb rating is considerably more than the other entries in this class. Notably, total cargo volume is hampered by its lower roof.
View Photo Gallery | 32 Photos
Photo 17/32   |   4 Ram Cargo Van
Engine/Transmission:
3.6-liter DOHC 24v V-6, 283 hp, 260 lb-ft torque
Six-speed automatic


Fiat Doblo (Future Ram Compact Van)
Just for the heck of it, we thought we'd do a little digging and get some specs on the Fiat Doblo, which is offered in a mind-boggling array of configurations in Europe. These range from a five-passenger "Combi" model to a cutaway cab/chassis pickup, with short and long-wheelbase, as well as low and high-roof models. We don't know if the U.S. is going to get all of these options and configurations, but we picked out what we think will be the four most likely configurations that we might be offered.
View Photo Gallery | 32 Photos
Photo 21/32   |   Fiat Doblo Cargo Short Hi Roof Front Angle
If Ford is being deliberately vague with its specs with the Transit Connect, it may be because it's awaiting the final announcement of what Doblo models are coming to the U.S. Ford's ballpark claim of 130+ cubic feet of cargo volume for the long-wheelbase Transit Connect would be handily exceeded by the high-roof, long-wheelbase Doblo, which can pack in 176.6 cubic feet.
In terms of the engine options offered on the Doblo, the most interesting (and probably the least likely to come to the U.S. market) is Fiat's 2.0-liter MultiJet turbodiesel, which produces a modest 133 hp, but more importantly, a stout 236 lb-ft of torque. The 1.4-liter gas engine is offered in Europe as a naturally-aspirated version making 95 hp and 94 lb-ft of torque, and a "T-Jet" turbocharged version optimized for natural gas, which makes 120 hp and a respectable 152 lb-ft of torque. An interesting intermediate diesel option is the 1.6-liter MultiJet which makes 105 hp and 214 lb-ft of torque. Fiat also offers a 1.3-liter MultiJet turbodiesel in Europe with 90 hp and 148 lb-ft of torque, but we don't think there's a strong likelihood that engine will come to the U.S.
View Photo Gallery | 32 Photos
Photo 22/32   |   Fiat Doblo Cargo Long Left Rear Angle
In terms of changes for the U.S. market you'll likely to see for the Doblo are an availability of (or even mandatory) automatic transmission, and the addition of another gasoline engine option, most likely in the form of the 2.0-liter from the Dart.
View Photo Gallery | 32 Photos
Photo 23/32   |   Fiat Doblo Cargo Model Line
Engines/Transmissions (European-spec):
1.4L SOHC 16v I-4, 95 hp, 94 lb-ft
1.4L SOHC 16v turbo I-4, 120 hp, 152 lb-ft
1.6L DOHC 16v I-4 turbodiesel, 105 hp, 214 lb-ft
2.0L DOHC 16v I-4 turbodiesel, 133 hp, 236 lb-ft
five-speed manual, six-speed manual