Chrysler's Three-Row SUV Gets Even Better for 2014 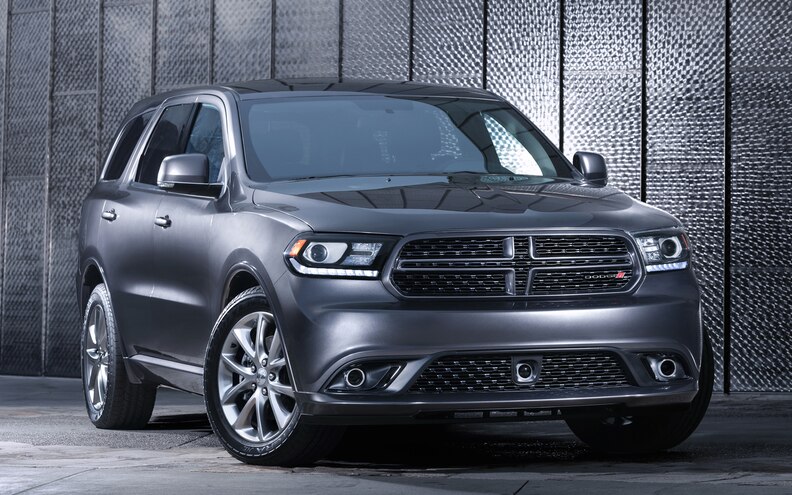 It wasn't all that long ago that Dodge made the Durango a unibody SUV -- only three years ago, in fact. In 2010 the all-new 2011 Durango went on sale with a better look, new engines, and fewer compromises than people expected. The SUV still carried three rows of people, could tow up to 7400 pounds with the V-8 (and still came with a V-8), and had an improved chassis and suspension, which helped with ride and handling. The benefit was making the vehicle more fun to drive without losing the Durango's famous capability.
View Photo Gallery | 40 Photos
Photo 2/40   |   2014 Dodge Durango RT Rear View 10
So now, a brief three years later, the Durango is getting spruced up, receiving updates similar to those in the 2014 Grand Cherokee. When it comes to performance, the most notable change is the use of the new ZF eight-speed automatic transmission behind the 3.6-liter V-6 and 5.7-liter V-8. This is a version of the same transmission found in the current Ram and the 2014 Grand Cherokee. In the Durango, it will be controlled through a dial on the dash -- just like in the Ram. This is the first SUV in its class to get an eight-speed, and that change alone is said to improve fuel economy in the Durango by 9 percent. There is also an Eco Mode for 2014.
View Photo Gallery | 40 Photos
Photo 3/40   |   2014 Dodge Durango RT Front View In Motion
The vehicle gets new styling tweaks as well. We have seen an evolution of Dodge exterior cues over the last few years, and many of those visual features are coming to the new Durango. The front end uses a new fascia with a floating crosshair grille. Flanking the grille are new projector headlights, and LED running lights are available. There are three different grilles: a chrome surround with black "Split-Hex" texture (SXT, plus Limited, a new trim level for 2014), body-color surround with "Pro-Form" pattern (Rallye, R/T), and chrome surround with bright chrome "Cross-Hex" grille (Citadel). The Rallye and R/T also use several unique features, such as black headlight bezels, and body-color wheel flares, sills, and fascias. The R/T was lowered 20mm. Projector foglights are now standard on all Durangos, and a roof rack side rail system is standard on Limited and Citadel models.
The rear end was also redone for 2014. It now uses Dodge's "racetrack" taillights, which have 192 LEDs. The tailgate's hatch release was redone; now there's a soft-touch button in the recess. In addition, the rear fascia was redesigned to look cleaner and more sculpted, yet makes the trailer hitch look like it's more integrated with the rear-end design. There are also seven all-new wheel designs, and every trim level gets at least one new wheel.
View Photo Gallery | 40 Photos
Photo 10/40   |   2014 Dodge Durango RT Rear Hatch
The Durango's interior was redone, adding attractive touches and more convenience and technology for driver and passengers. Sitting in front of the driver is a new gauge cluster that uses a 7-inch TFT digital cluster. According to Dodge, there are more than 100 ways the driver can customize the cluster. The new steering wheel comes standard with paddle shifters. Because the transmission is now controlled with a knob, the paddles are the only place where you can shift manually. The center stack has changed as well, with new 5- and 8.4-inch Uconnect touch screens. While climate and entertainment features are controlled through the screen, there are also redundant knobs and buttons below the screens. Navigation has been updated with new 3-D maps. There's even a media hub with a slot for an SD card, a USB port, and an aux jack, and an available feature that makes a Durango a Wi-Fi hotspot. Bluetooth is available, and apps such as Pandora and Slacker would be safely accessible. Blu-ray screens are optional for second-row passengers as well.
View Photo Gallery | 40 Photos
Photo 11/40   |   2014 Dodge Durango RT Arm Rest
There is a lot of technology in the 2014 Durango in the form of safety -- there are more than 60 safety features in all. There is a theft alarm notification that will tell an owner via text or email if the alarm is going off on their Durango. You can listen and respond to texts while driving. New for 2014 are the forward collision warning system with crash mitigation, and adaptive cruise control that can bring the vehicle to a complete stop. It also has optional blind-spot monitoring, helpful when changing lanes, and Rear Cross Path detection, handy in parking lots.
View Photo Gallery | 40 Photos
Photo 12/40   |   2014 Dodge Durango RT Towing 02
Dodge has shown that it has no intention of resting on its laurels with the new Durango. This is a vehicle that already provided a fairly complete package; now it looks like it's getting even better. Production is set to begin in the third quarter of 2013 at the Jefferson North Assembly Plant in Detroit, Michigan.