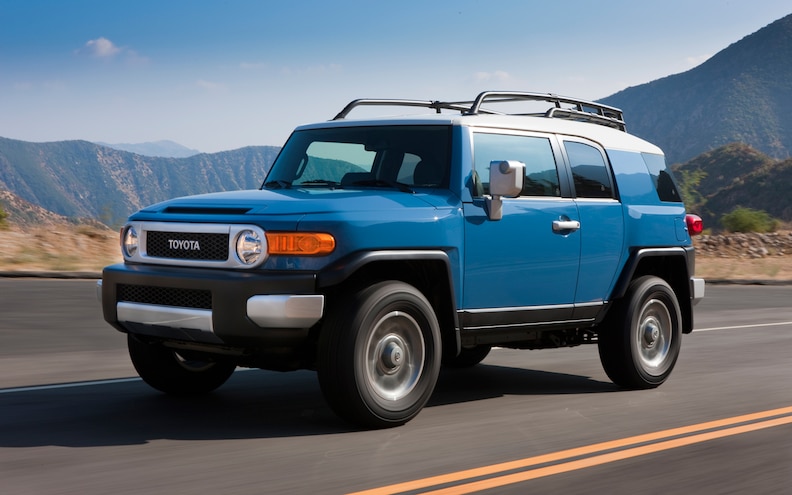 It could've gone either way. After its launch as a 2007 model, the Toyota FJ Cruiser might easily have become a darling of the genteel SUV set by virtue of its cute retro-inspired styling and decent on-road manners. Alternatively, all the off-roading heritage brought to us by the letters F and J had a chance of grabbing genuine mud-mashing, dune-dashing types. Fortunately (though Toyota's accounting department might beg to differ), the second crowd became the FJC's champions.
View Photo Gallery | 16 Photos
Photo 2/16   |   2012 Toyota FJ Front Three Quarter
It has the right ingredients: body-on-frame construction, ground clearance of 9.6 inches, wading capability of 27.5 inches, 34-degree approach angle, 31-degree departure angle, a tough-wearing and easy-to-clean interior, a 4WD system proven on vehicles like the 4Runner, and a dependable 4.0-liter V-6.
Starting off with 239 hp and 278 lb-ft of torque, this engine was updated in 2010 to 260 hp and 271 lb-ft. The revision meant slightly better fuel economy when using 91-octane fuel, which is recommended for tougher duties. Both iterations can still run fine on 87 octane. Towing capacity is 5000 pounds.
There are rear-drive versions with slightly less ground clearance. Toyota connects a five-speed automatic transmission to these models, but also offers a six-speed manual in 4WD versions.
View Photo Gallery | 16 Photos
Photo 3/16   |   2012 Toyota FJ Rear Three Quarters
Although the old and well-loved FJ40 Land Cruiser provided a design direction for the FJC, white roof included, this newer model still ended up with a few substantial blind spots as well as rear-hinged rear passenger doors that aren't quite as practical as its makers might have hoped. Opening the rear door always means opening the corresponding front door.
Within this shell is a cargo volume of 66.8 cubic feet, or 27.9 cubic feet with the second-row seats in place. Options include a 115-volt power outlet. And there is a whole section of the aftermarket dedicated to the FJ Cruiser where enthusiasts may obtain roof lights, snorkels, skidplates, suspensions, protection bars for various areas of the vehicle, exhaust systems, winches, shifter knobs, and rearview cameras (this last item takes care of one blind spot; cameras became a factory option for 2009), plus a slew of other items too numerous to mention.
A design flaw resulted in cracked and/or warped fender aprons inside the engine bay of 2007 and early 2008 models. This has since been rectified, but take an extra good look under the hood while considering a purchase. The majority of recalls have been in relation to exterior lighting and seatbelt issues, as well as certain TRD (Toyota Racing Development) optional brake kits.
Other than that, coolly logical thinking is the order of the day when looking to buy a pre-owned FJ Cruiser. Check for damage caused by accidents or going too gung-ho off-road, leaks around the engine or front and rear differentials, maintenance records and receipts -- the usual procedure. If in doubt, get a Toyota tech to give it the once-over. One member of fjcruiserforums offered this little nugget of advice: Make sure the auto transmission doesn't shudder between second and third gears at around 35 mph. That could indicate a problem with the torque converter.
View Photo Gallery | 16 Photos
Photo 10/16   |   2012 Toyota FJ Front Three Quarters In Motion 4
A 2008 FJ Cruiser in good condition, with four-wheel drive, automatic transmission, and power driver's seat, is valued at $19,900. A 2008 Jeep Wrangler Unlimited with the same kind of spec has a book price of $18,035. A similar 2008 Nissan Xterra comes in at $18,820.