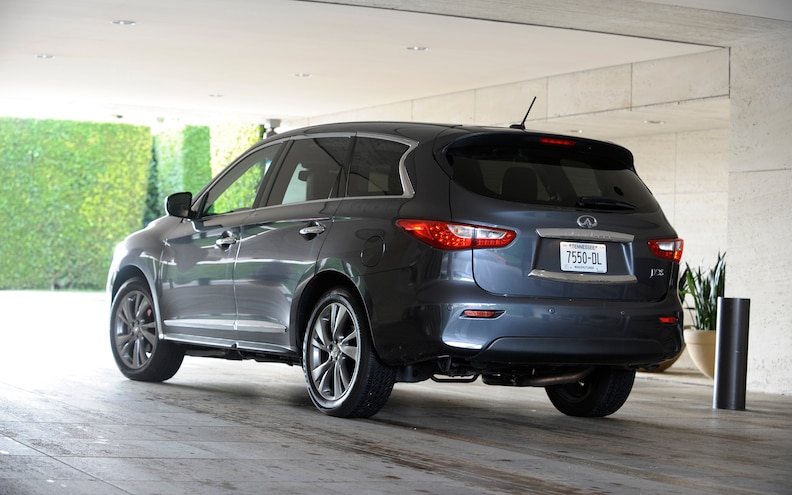 The Infiniti JX35 (soon to be re-named the QX60) has been a popular addition to Nissan's premium brand lineup, and has also garnered its share of fans among our staff. Its room for seven, and smooth-running 3.5-liter V-6 paired to a shiftless CVT makes it a relaxing companion for racking up the miles. Staff photographer Julia LaPalme had the JX in her custody when it came up for its second major maintenance appointment consisting of an oil and filter change and tire rotation. The service schedule on the JX was adjusted from Schedule 1 (severe) to Schedule 2 (normal), doubling the oil change interval from 3750 to 7500 miles.
View Photo Gallery | 8 Photos
Photo 2/8   |   2013 Infiniti JX35 Front Three Quarter

"Driving up to the Central Coast for a weekend-long camping trip, the JX averaged 19.2 mpg."

While it was getting serviced, a quirk with the rear liftgate function was addressed as well. It seemed the rear hatch had a tendency to want to self-close when it got to the top of its aperture. A clearance sensor for the liftgate was replaced under warranty, and it appears fingers and foreheads are now safe. In terms of fuel economy, the JX achieved an average of 18.4 to date. LaPalme recorded a 19.2 mpg average on a weekend camping trip up California's central coast.