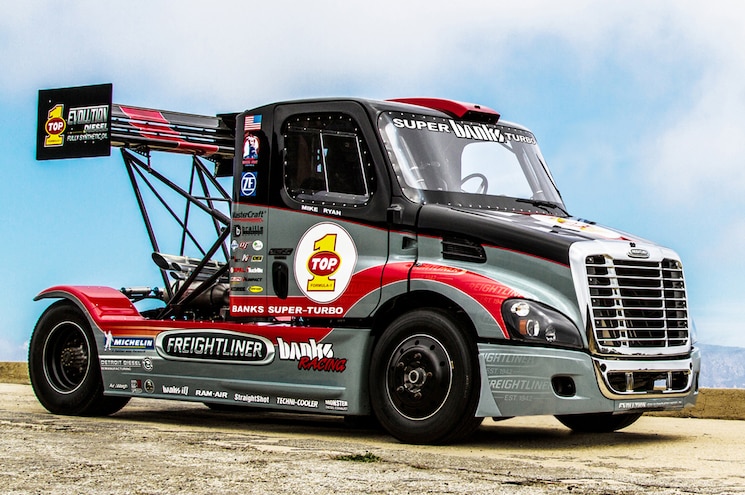 What is a Super-Turbo? It's an engine with both a supercharger and a turbocharger attached, according to Gale Banks of Banks Racing. His team of aftermarket experts has designed a Detroit Diesel Series 60 engine using both kinds of forced induction to help racer and world-famous stuntman Mike Ryan take a shot at breaking a world record at the 2013 Pikes Peak International Hill Climb. We got a chance to see the truck at Irwindale Speedway during its first ever run since getting an engine transplant and lots of other interesting upgrades, including multiple waves of water/methanol injection and water-cooled brakes. You can see video from the racetrack run on the Banks Racing YouTube site .
View Photo Gallery | 44 Photos
Photo 2/44   |   Banks Super Turbo Freightliner 01
At last year's race, Ryan lost braking with just 3.5 miles to go, and ended up spinning out into a guardrail. A screenshot from just before that wreck is currently the main photo on the home page of the Pikes Peak web site at: www.ppihc.com. Recovering from that took more than 30 seconds, and he still managed to beat his old record from 2006 by 5 full seconds. The 2012 race was the first since the 156 turns of the Pikes Peak Highway were paved all the way to the summit, so it's no surprise that Ryan was running faster than ever before, but with all the modifications to his truck made by the people in the Banks workshop, he was poised to demolish his previous record.
View Photo Gallery | 44 Photos
Photo 3/44   |   Banks Super Turbo Frightliner
The Super-Turbo engine setup is built around a 14.0-liter Detroit Diesel Series 60 (DD60) inline-six semi truck engine that weighs more than 2600 pounds and stands taller than most grade-schoolers. An 8.3-liter twin-screw-style supercharger powered by a custom-made driveshaft is mounted on the driver's side of the engine, which feeds into a huge BorgWarner S510 twin-scroll turbo such as you might find on a drag-racing engine. This setup is designed to create up to 60 psi of intake pressure evenly across the rpm range (even though it is capable of up to 180 psi), which will be essential in pulling the truck out of the corners. Two blow-off valves eject any undesired air pressure from the system.
Custom-built equal length headers the size of a normal vehicle's tailpipe feed directly into the turbocharger. Two giant wastegates prevent the turbo from spinning too fast and pulling itself apart, and they both have outlets that are just as big as the headers. The wastegate pipes are bundled together with a large stainless steel exhaust pipe attached directly to the turbo. After the engine fired up at the racetrack with a loud mix of supercharger whine and turbo buzz, we told Gale Banks that it sounded angry, to which he smiled and excitedly replied, "It sure does! It sounds nice and angry."
View Photo Gallery | 44 Photos
Photo 10/44   |   Banks Super Turbo Supercharger Setup
Four stages of 50/50 water/methanol mix injection and two stages of water-cooling sprayers shooting into the intercooler are credited with adding 400 hp to the Super-Turbo setup. Four nozzles at the intake of the supercharger are activated in two stages based on the supercharger outlet temperature. Then, just before air enters the engine, six nozzles spray two stages of water/methanol directly into the intake manifold runners for each cylinder based on the boost pressure.
View Photo Gallery | 44 Photos
Photo 11/44   |   Banks Super Turbo Supercharger
The first stage starts pumping when the supercharger output reaches 120 degrees Fahrenheit, then the system seamlessly engages the second stage, progressively increasing pressure from 100 to 300 psi with all four nozzles in use. The third and fourth stages of water/methanol injection take place in the intake manifold mounted on the engine, and are activated when the intake pressure reaches 30 psi. Five nozzles spray plain water directly into the large air-to-air intercooler under the hood in two stages that kick in starting when the intake temperature reaches just 100 degrees F and with maximum power occurring by 150 degrees F.
The brakes also get a heavy dose of water-cooling thanks to nozzles that spray directly into the heat extraction vents inside each brake disc rotor. The high-flow nozzles are automatically activated when the brakes are applied and can be disengaged manually by the driver. Braking was a big issue for the truck at last year's race, so this upgrade is very important, especially with all the power that has been added with the Super-Turbo engine.
View Photo Gallery | 44 Photos
Photo 21/44   |   Banks Super Turbo Ram Air Intake System
The rest of the racing equipment for the truck includes handmade Michelin XDA-HT High Torque tires that cost more than $1000 each before they were customized for the race truck. The solid axle suspension uses King Off-Road coilover bypass shocks at each corner, along with a custom multilink setup with numerous stabilizers to keep the tires planted to the tarmac. The inside of the cabin looks more like the inside of a trophy truck than a standard sleeper cab, with switches and readouts across the entire dash, racing seats, and a high-mounted racing speed-shifter for the transmission.
View Photo Gallery | 44 Photos
Photo 22/44   |   Banks Super Turbo Mike Ryan Gale Banks
Once the testing was complete, Mike Ryan and the Banks Racing team went to Colorado Springs, Colorado, to get ready for the race. Trucktrend.com has all the results from this year's Pikes Peak International Hill Climb, or you can visit www.ppihc.com.
SOURCES
Banks Power
www.bankspower.com
Mike Ryan Motorsports
www.mikeryanmotorsports.com
Pikes Peak International Hill Climb
www.ppihc.com