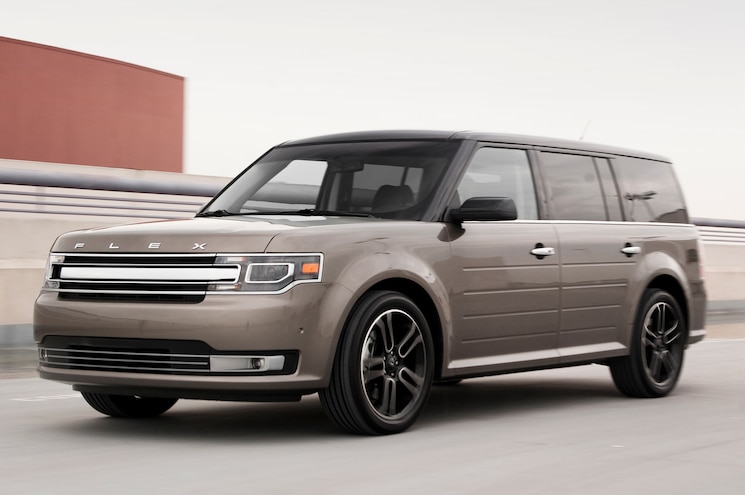 The traditional station wagon may be all but dead in the U.S., but a case could be made for the 2013 Ford Flex as being the continuation of the large wagon tradition. There's really nothing else quite like it on the market -- packaging and size-wise, the closest equivalents are GM's Lambda triplets, but none of them have the Flex's squared-off style. Although motivated by a transverse V-6 powertrain instead of a longitudinal V-8, we feel the Flex could be seen as the Country Squire of the 21st century.
Sure, the Flex is about a foot taller, 14 inches shorter in length, and a few inches narrower, but it has the relaxed, stretch-out room its Panther platform-riding forebear was known for. The side-facing "way back" seats have been replaced with a forward-facing third row, but otherwise offers similarly commodious accommodations. You may remember our test earlier this year of an EcoBoost-equipped Flex. This one had the milder of the two engine options. No disrespect to Ford's proven 3.5-liter Duratec V-6, but get the EcoBoost. The additional 78 hp and 96 lb-ft of torque make a noticeable difference in the driving character of the Flex. Neither exactly replicate the relaxed waft of the old 302 V-8 and AOD four-speed automatic, but the EcoBoost does a much more convincing job with its 350 lb-ft of torque. 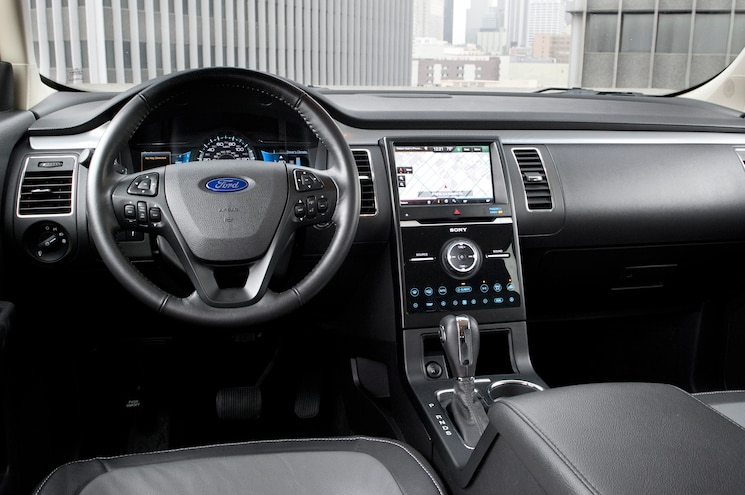 View Photo Gallery | 21 Photos
Photo 2/21   |   2013 Ford Flex Limited AWD Dash View
The 287-hp and 254 lb-ft naturally aspirated 3.5-liter needs revs to deliver the goods. It doesn't help that it's strapped to a transmission that, at least in our tester, seemed like a reluctant participant in propulsion duties. Shifts were jarring, especially between second and third, a sensation not helped by what feels like a steep ratio drop-off, something we've noticed in other Ford models with the 6F transmission. More often than not, when passing or accelerating, the engine is forced into a downshift from fourth or fifth to second that summons a screaming RPM spike that accompanies its strained howl as it tries to yank along the Flex's substantial 4759-lb weight. Its 7.9-second 0-60 time is acceptable for its size, but the numbers don't convey the experience. The engine is simply not happy under the whip. Based on our experience with eight-speed transmissions, we think a few extra ratios would substantially improve the driving experience in the Flex.
Beyond the drivetrain, the experience we had was largely the same as with our earlier EcoBoost-equipped tester. The seats are broad and comfortable and it has the same configurable instrument cluster and button-less center stack. The unusually wide doorsills that are prominent and cumbersome in the Explorer are less annoying on the lower-slung Flex, but the wrap-under doors with their sharp sheetmetal corners nicked our ankles a time or two.
Unlike some other Ford models where the EcoBoost engine is an a la carte option, it's a $3150 package option on the Flex Limited and comes only with all-wheel-drive. We would consider it mandatory for the Flex. It's simply better suited to hauling around the Flex's substantial mass.
If the Flex's boxy, unorthodox style appeals to you, we suggest you act fast, as it may not survive long past the 2014 model year, and will likely not live to see a second generation. The more conventional Explorer is similar in many ways, but also not as subjectively appealing or comfortable as the Flex in our experience. The Flex may not be a perfect analogue to the Country Squire, but it's about as close as you're going to get in today's largely wagon-less world. 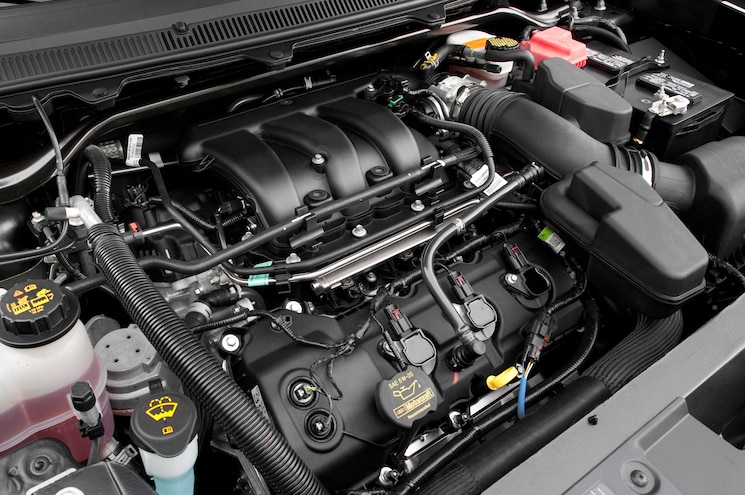