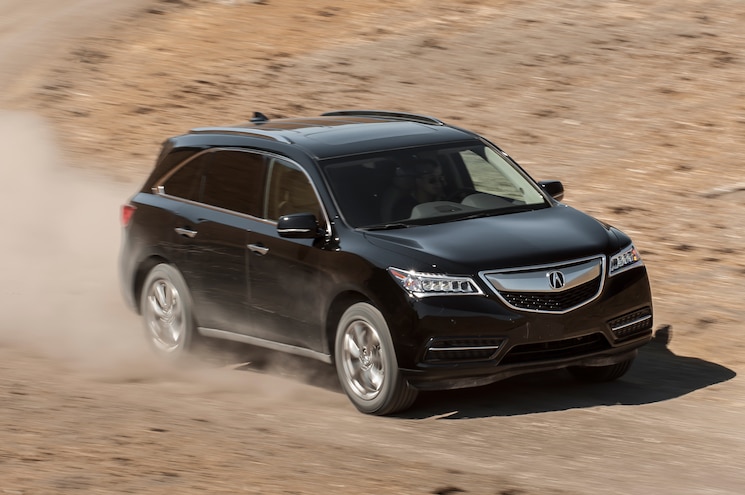 The 2014 Acura MDX SH-AWD is evidence we need to dispense with the notion that SUVs are inherently numb, dull-to-drive, wasteful, bloated beasts clogging the boulevards of suburbia.
In the early days of the breed, certainly, little care was given to driving dynamics, fuel economy or environmental friendliness. That was when the Ford Explorer sold more than 400,000 units a year, and gasoline was a little more than a buck a gallon. Today's SUV buyers are a far more demanding lot, and are willing to sacrifice little to nothing moving from a car to an SUV for practical or personal reasons. The MDX is an excellent example of a no-compromises, premium SUV that offers something for everyone in the family.
Of course, excellence rarely comes cheap, and our fully-equipped MDX with the Advance Entertainment package totaled $57,400 after all was said and done. But for that price, you get a power tilt & telescoping steering wheel, driver's memory seat, heated and cooled front seats, a widescreen rear entertainment unit (so wide it can simultaneously display two videos side-by-side), Acura's Super-Handling All-Wheel Drive, standard Jewel Eye LED headlights, active noise cancellation, and a power rear tailgate, among other niceties. View Photo Gallery | 22 Photos
Photo 2/22   |   2014 Acura MDX SH AWD Rear View
But loading up an otherwise mundane vehicle with goodies doesn't make it magically compelling or special. Thankfully, the new MDX is a dynamic standout in the three-row SUV class. Few other SUVs in this price range so deftly combine three-row capability with sharp reflexes and responsive handling. These attributes are further delivered in the traditional Honda/Acura fashion of efficiency, engineering elegance and precision, rather than just throwing a bunch of microprocessors and loads of excessive power in the mix.
That's not to infer that the MDX is at all low-tech or underpowered. From its lighting to fuel injection, the 2014 MDX is state-of-the-SUV-art, with the aforementioned standard Jewel Eye LED headlights, Earth Dreams direct injection, and plentiful safety and convenience features. But the presentation and packaging comes across as restrained and appropriate, rather than overwhelming. Our tester was equipped with both adaptive cruise control and lane departure warning. Thankfully, the latter's hyper-sensitive audible alerts are mutable in both the vehicle settings and by a button on the dash.
As noted in our first drive, the 2014 MDX is down in power from its predecessor by 10 hp and 3 lb-ft, but thanks to a significant weight loss, and adept tuning of the 3.5-liter V-6, the torque curve is fatter, and the engine delivers its 290 hp and 267 lb-ft of torque in a delightfully linear fashion, with just a hint of the high-end VTEC kick and intake roar Honda engines are known for. At the track, the MDX hustled from 0-60 in a respectable 6.4 seconds, and through the quarter-mile at 14.9 seconds at 92.9 mph. Both respectively 0.4 seconds faster than the last-generation 2010 MDX we tested. The fact that the 2014 model was a significant 318 pounds lighter probably helped. EPA ratings are a significant 6 mpg better on the highway and 2 mpg better in city testing. We observed a respectable 19.5 mpg average in mixed driving. 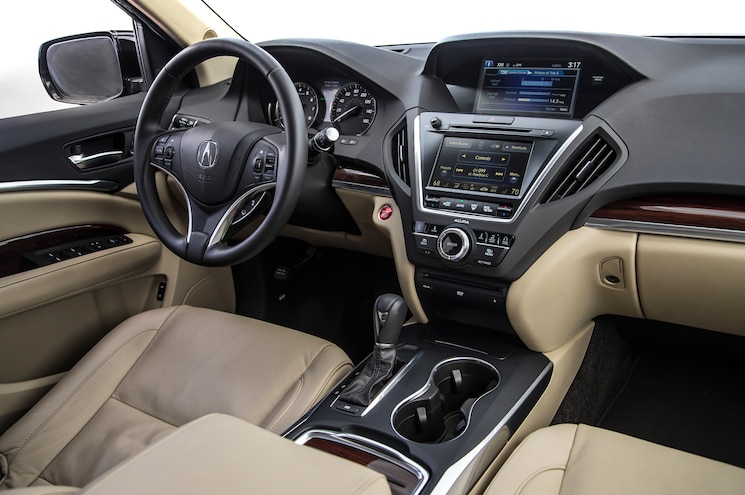 View Photo Gallery | 22 Photos
Photo 6/22   |   2014 Acura MDX SH AWD Front Interior
That lightness is tangible behind the wheel, with the MDX possessing sports-sedan levels of agility. Although maximum lateral acceleration on the 2014 was the same 0.85 g we measured on the 2010 model, driving the 2014 back-to-back with its predecessor clearly illustrates how different the two vehicles are. The 2014 model is slightly narrower and longer than the previous model, but the subjective difference is stark between the chunky, broad feel of the last model and the trim, tailored feel of the 2014.
Practicality remained a priority, and with new clearly-marked seat-folding buttons for the second row, the third row is as accessible as ever. However, they're still not suitable for adults on road trips. The much-larger GM Lambda triplets still reign supreme in third-row crossover room, but aren't even in the same galaxy as the MDX's performance and athleticism.
In full-boat Advance Tech AWD trim, the MDX is venturing well into the price territory generally occupied by its German-branded rivals. And while on paper its transverse drivetrain and slightly lower power output may make it seem like a less attractive proposition than the Black Forest-bred SUVs, its behind-the-wheel experience offers plenty that an enthusiast can appreciate. Whether you're an MDX loyalist, a convert from the Lexus RX, or an agnostic shopper with an objective checklist, the MDX has the goods to please every member of the family. 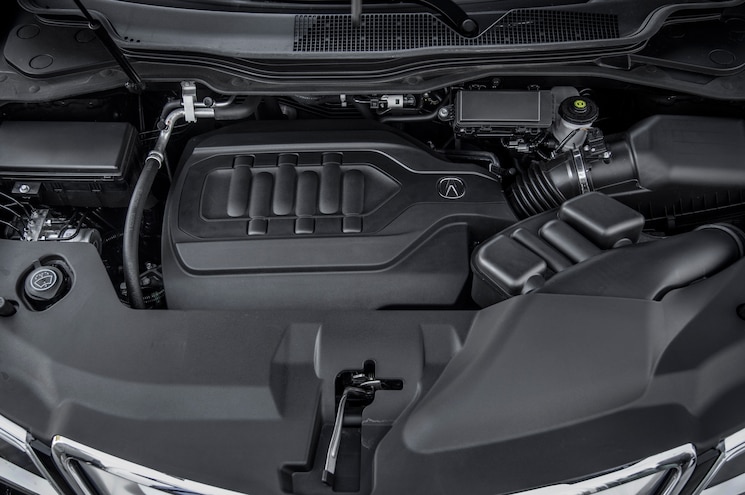