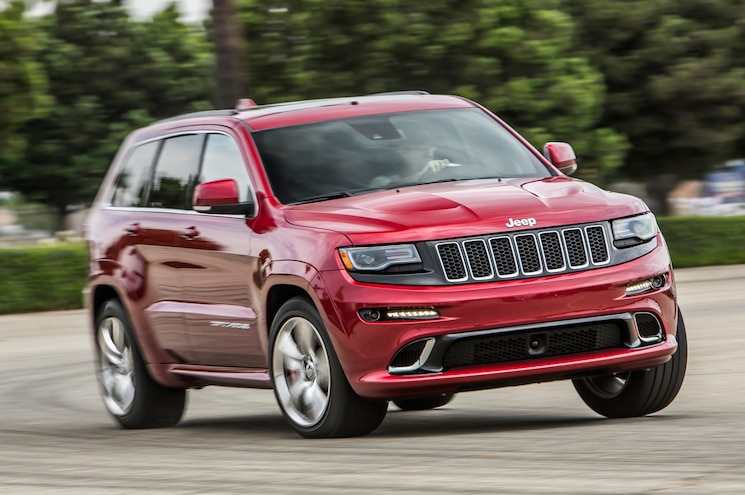 Following the addition of the excellent TorqueFlite 8 transmission, the 2014 Jeep Grand Cherokee SRT looks to be the best version of the hot rod SUV to date.
Unlike some "sport" versions of other SUVs that affix a few badges and give you a body-colored grille, the SRT leaves no doubt about its mission in life. From the unique SRT steering wheel to the launch control button on the center console, meaty 295-width performance tires, aggressively bolstered front seats, and assertive exhaust note, it's clearly not your run-of-the-mill grocery getter.
The Grand Cherokee SRT may not have the boulder-bounding capability of low-range-equipped Jeeps, but it's not totally without the "utility" component promised in an SUV. The 2014 SRT has a 7200-lb maximum towing capacity -- the same as other 4x4 Grand Cherokees, an improvement of 2200 lb over last year's model -- and more than double the towing capacity of the original Grand Cherokee SRT8, which had a paltry 3500 lb rating. 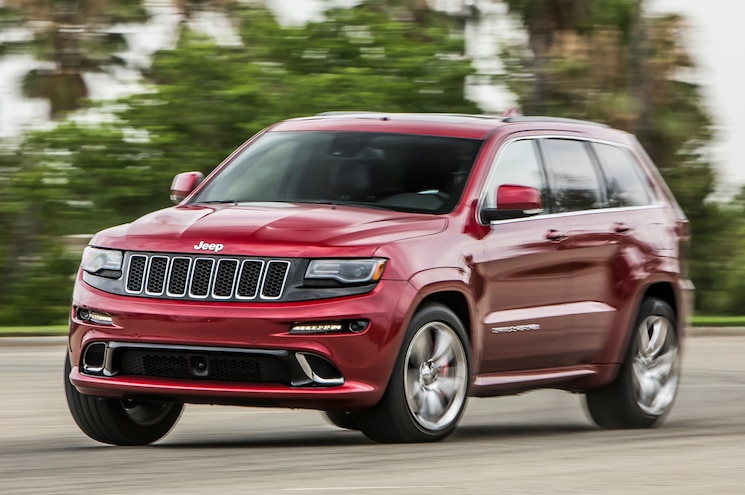 View Photo Gallery | 24 Photos
Photo 2/24   |   2014 Jeep Grand Cherokee SRT In Motion
The biggest functional change for 2014 is the aforementioned addition of the eight-speed transmission. Nobody accused the previous model with the five-speed of being sluggish or gutless, but the three extra ratios sharpen the responses further, giving the it a lively feel belying its 5317-lb weight. Especially impressive are the ultra-quick gear changes in manual mode. Although not quite as quick as those on dual-clutch transmissions, the responsiveness of the TorqueFlite 8 in sport mode is among the best we've experienced in a conventional torque-converter automatic.
Another feature that accompanies the TorqueFlite 8 in the 2014 SRT is launch control. Such a feature would make perfect sense in a Challenger or even a Charger SRT, but it borders on gimmicky in the Jeep. In terms of its effectiveness, Road Test Editor Scott Mortara noted that the best times were achieved with the old-school brake & throttle two-step. Launch control gives an adrenaline-inducing anticipation with display prompts and a mini Christmas tree icon on the console, but its effectiveness as a performance aid at the track is debatable.
Livable Daily Driver
Even when not driving in balls-to-the-wall mode, the Grand Cherokee SRT is civil enough to be a daily driver, though its aggressive edge is never far from the surface. The exhaust burble from the high-output 6.4-liter Hemi V-8 is ever-present, and makes a subtle flatulent bass note in V-4 mode. But Chrysler's MDS cylinder-deactivation system does make a tangible difference in terms of fuel consumption. We observed a mixed 15 mpg during its week-long stay with us. That may not seem very impressive, but it's about the same average we've seen with vastly less powerful midsize SUV models.
Calling a 392 cubic-inch engine with 465 lb-ft of torque "peaky" may seem odd, but the big Hemi V-8 doesn't exactly punch you in the gut with off-the-line torque as much as you might expect. Rest assured, once the tach needle swings above 3000, you're planted into the well-bolstered buckets with a determined shove to the tune of a heavy metal soundtrack that would make NASCAR fans feel right at home. The sprint to 60 mph is dispatched in a swift 4.4 seconds, with a quarter-mile time of just 13.1 seconds at 103.6 mph. Fittingly enough, the purchase of the SRT comes with a day of high-performance driving instruction at the Richard Petty Racing School. 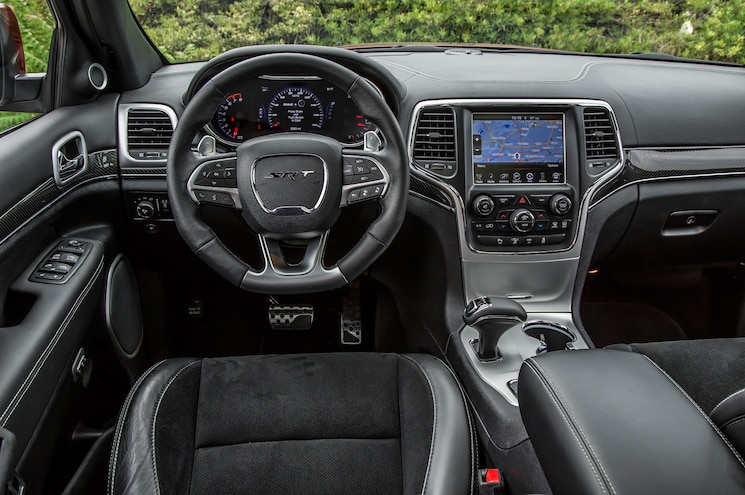 View Photo Gallery | 24 Photos
Photo 9/24   |   2014 Jeep Grand Cherokee SRT Dash View
With as much beefy, purposeful performance hardware and trimmings the Grand SRT is packing, you might expect a kidney-pummeling ride, but the ride quality is surprising refined and livable. Definitely firm, even on the default "Auto" mode, but never flinty or fatiguing. Despite its higher ride height relative, the Grand SRT never feels tippy or unstable, even at velocities that will test your and your passengers' pucker threshold.
If in-cab electronics are your thing, the interior will not disappoint. In addition to a multitude of possible configurations of the gauge cluster, enabled by the TFT display, the big 8.4-inch Uconnect center display will also display auxiliary readings such as oil temperature and pressure, voltage, transmission temperature, G-forces, and a track timer. Whether in small-screen 5-inch or big-screen format, we're fans of the intuitiveness and responsiveness of Chrysler's Uconnect interface. Ford, take notes.
A $70,000 Bargain?
Is there any downside to Jeep's high-performance flagship? Well, depending on your perspective, maybe. The $70,260 price tag on our tester makes it the most expensive Jeep in the brand's stable by a long-shot and aside from the SRT Viper, it is the most expensive model in Chrysler's portfolio. Is it worth it? That's a subjective call only you can make. With fully-optioned Escalades approaching six figures, and high-performance European SUVs blowing through that ceiling with impunity, the Grand Cherokee SRT seems like a comparative bargain. But if it's within your budget, we can assure you that Jeep's hot-rod SUV won't disappoint.