From Military Vehicle To Luxo SUV 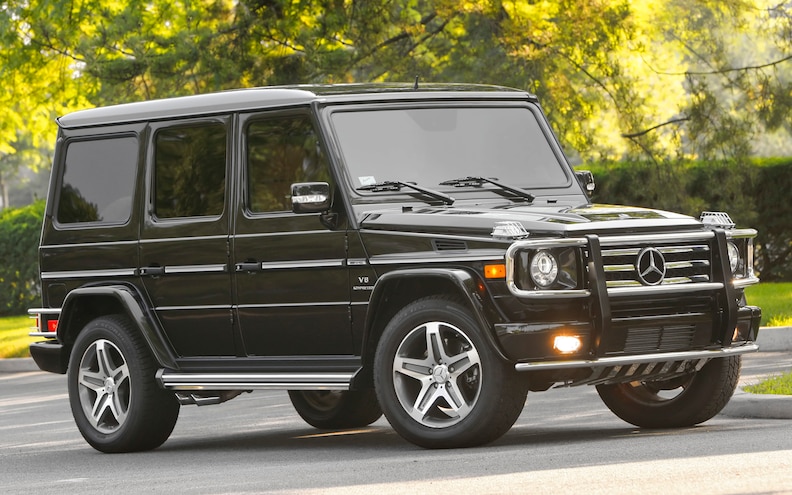 There's something deeply attractive about the Mercedes-Benz G-Class. Its reputation for toughness mixed with a look that doesn't appear to honor any design conceits has a distinct appeal. It makes no apologies for its coolly brutal angles.
Those angles have helped it stand the test of time. The G-Wagen (short for Gelaende-wagen, German for "rough terrain vehicle") is Mercedes-Benz's longest-running SUV model, first introduced in 1979. And because of its apparent disdain for styling fads, the G has managed to keep looking good for all these years. A follower of Bauhaus design would admire the G-Wagen for its strict function-following form. It's also built like a brick Bauhaus. This is military-grade hardware. The G-wagen actually started life as a military vehicle, a joint project with Steyr-Puch. This Austrian company has now evolved into Magna-Steyr, and over the course of its history has made a range of products from firearms to buses, including other four-wheel-drive vehicles. The G-Wagen has always been produced at Steyr-Puch's facility, practically on a hand-assembled basis. The present-day version, much the same as the original, retains a body-on-frame construction. That steel frame is dip-primed and powder-coated.
View Photo Gallery | 8 Photos
Photo 2/8   |   2002 2009 Mercedes Benz G55 AMG Front
The permanent four-wheel-drive system distributes torque 50/50 front and rear. The G is the only SUV to have three locking differentials working with a transfer case (all synchromesh) and electronic traction control. This thing can get itself into, through, and out of almost anything. Depending on the surface, the G can climb an 80 percent incline and handle a tilt angle of 54 percent. Approach angle is 36 degrees, and the departure angle is 27 degrees in the non-AMG version. Ground clearance is 8 inches and the vehicle can wade in depths of up to 23 inches.
A 280 GE model (this was before Mercedes-Benz started putting letters at the beginning of vehicle names) won the 1983 Paris-Dakar Rally, a fearsomely tough challenge of man and machine. At the other end of the thermometer, German filmmaker Thomas Junker took a stock G500 to the coldest place on Earth, an area of Siberia, in the winter of 2006. Temperatures went as low as minus 53 degrees Celsius (-63 Fahrenheit). Junker and his film crew covered more than 11,700 icy miles with no vehicular problems.
View Photo Gallery | 8 Photos
Photo 6/8   |   2009 Mercedes Benz G55 AMG Rear
There have been versions with short or long wheelbases, plus convertible and "tropical roofed" (a double-layered arrangement) models, with choices of diesel or gasoline engines. Interiors started out as sparse yet durable, gradually becoming more luxurious and tech-rich. The G-Class only became an official U.S. import in 2002, but earlier models were brought over privately. Even gray market six-cylinder examples were commanding six-figure sums, so M-B made a U.S-spec G-Class.
View Photo Gallery | 8 Photos
Photo 7/8   |   2009 Mercedes Benz G55 AMG
These have all been long-wheelbase, four-door models; the tailgate is hinged at the side. The G500 came first, followed in 2003 by the G55 AMG version. Engine output for the G500 is 292 hp and 336 lb-ft of torque. This morphed into the G550 in 2009, good for 382 hp and 391 lb-ft. The G55 AMG first packed 349 hp and 387 lb-ft; upgraded to 493 and 516 in 2007. Resale values are strong, so a used G-Class is still pretty pricey. But owners seem to love them. Recalls have mainly featured fuel system and lighting issues. A 2006 G500 in good condition and average mileage is valued at around $40,000. A similar Range Rover Supercharged would be in the $30,000 ballpark.
View Photo Gallery | 8 Photos
Photo 8/8   |   2009 Mercedes Benz G550 Front