We Try Out the Versatile SUVs at the Heart of the Market, This Time With the V-6 and V-8 Engines 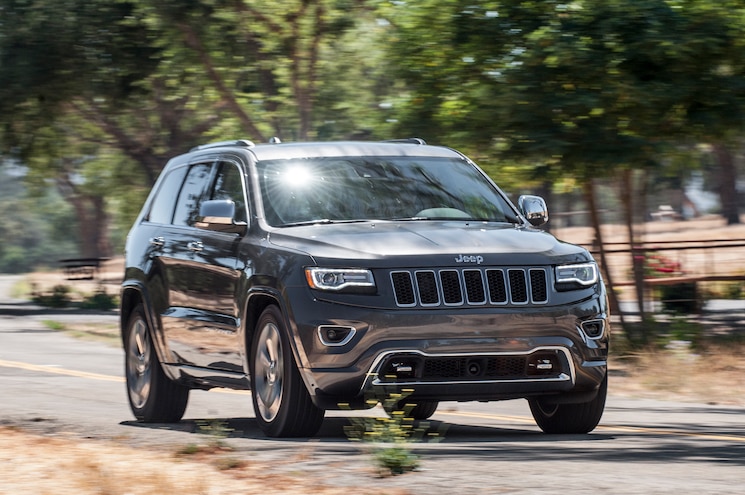 There aren't that many sport/utility vehicles on the market today that offer the bandwidth of the 2014 Jeep Grand Cherokee. There are four versions: the fuel-sipping diesel, value-minded V-6, Hemi-powered V-8, and hi-po SRT. When we had the opportunity to test two of the Grand Cherokees in the lineup, we'll admit we chose based on emotion, specifically trying out the new EcoDiesel Grand Cherokee and SRT. We know that, even though we love the diesel and the SRT for very different reasons, most people aren't going to buy either of those models. So this time around, we are focusing on the heart of the market: the Grand Cherokees that are powered by the 3.6-liter V-6 and the 5.7-liter V-8.
First, we drove the Pentastar-powered Grand. This one was a Limited 4x4, with enough cushy features that the as-tested price is $41,380. As we have said before, with every new generation, the Grand Cherokee gets more luxurious, and the price tag reflects that. And in the V-6-powered Grand Cherokee, the interior uses excellent materials, and the color combination, cabin layout, and fit and finish are excellent. There are also plenty of creature comforts inside, plus handy information screens with data about the vehicle.
Starting up the Limited (and by that we mean pushing a button), we observed that the Pentastar, backed by an eight-speed automatic for 2014, has plenty of power off the line. Whether you're getting to speed on the freeway or stepping on the throttle when the light turns green, there is a lot of power. However, the oomph of the V-6/8A combination begins to wane when you have gotten up to freeway speeds and want to pass someone. The Pentastar is rated at 290 hp and 260 lb-ft, but the peak horsepower isn't until 6400 rpm and the engine is a little lacking in torque. Those wouldn't be an issue in other vehicles, but it's powering a 4903-pound SUV (as tested). We find this engine is terrific, and we doubt it would've worked at all well in the Grand Cherokee with a lesser transmission; but the eight-speed ensures this combo is a viable one on the daily commute. Most people will be very happy with the combination of around-town power and overall fuel efficiency (17 mpg city/24 mpg highway). The ride was cushy and comfortable on the highway, and everything about this vehicle feels solid.
That feeling of mass didn't hold the Pentastar-powered Grand Cherokee back at the track, though. Its 0-60 time was 7.7 seconds, and it ran the quarter mile in 15.8 seconds at 88.4 mph. Braking was quite good; the Jeep needed only 118 feet to stop from 60 mph. It's hard to determine what the Jeep's direct competitors are that combine this amount of capability and luxury, but the closest we find is a V-6-powered Toyota 4Runner, which took 7.6 seconds to hit 60 and 15.8 to complete the quarter mile at 88.0 mph. It took 129 feet to stop from 60.
So what happens when you step up to V-8 Hemi power? Well, for starters, we stepped up in trim level as well, so the Overland 4x4 we chose was a touch more expensive: $52,475 as tested. The Overland is beaten only by the Summit for topline status in the Grand Cherokee line. With an Overland, you get features like heated power-folding side mirrors, attractive open-pore wood accents, nine-speaker sound system, power and leather everything in the cabin, and ours served as a wi-fi hot spot. It also had the excellent Selec-Terrain 4WD system, which allows you to match the type of terrain you are going to drive over, with the description on the knob. (Hence the name.) And, as you would expect, the four-wheel-drive system is excellent off-road.
As impressed as we were with the V-6, the V-8 was even better. The combination of 360 hp and a much torquier 390 lb-ft -- which peaks at 4250 rpm -- took care of all of our minor gripes about the V-6. Those who want a little more fire under the hood should be very happy with the 5.7-liter, even if it means fuel economy goes down to 14 mpg city/20 highway. We admit that's a big jump, but having to choose between more power and more efficiency is why Jeep offers multiple engine options. Steering feel was excellent in both SUVs.
No surprise, the Overland did well at the track. The Hemi got the 5245-pound Jeep to 60 in 6.6 seconds and through the quarter in 14.9 seconds at 92.8 mph. But this Grand Cherokee needed 132 feet to stop from 60.
Those considering a Grand Cherokee are looking for a level of confidence behind the wheel, whether they are going off-road, towing, dealing with mud and snow, or are simply surviving the concrete jungle. They want a luxurious cabin. They want modern amenities. The new Grand Cherokee can provide all these things, and buyers who choose the Pentastar or Hemi will find that it does with these engines under the hood. 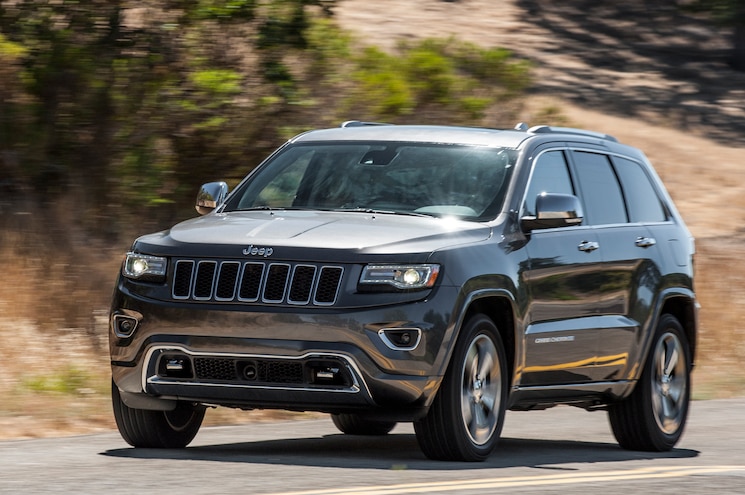 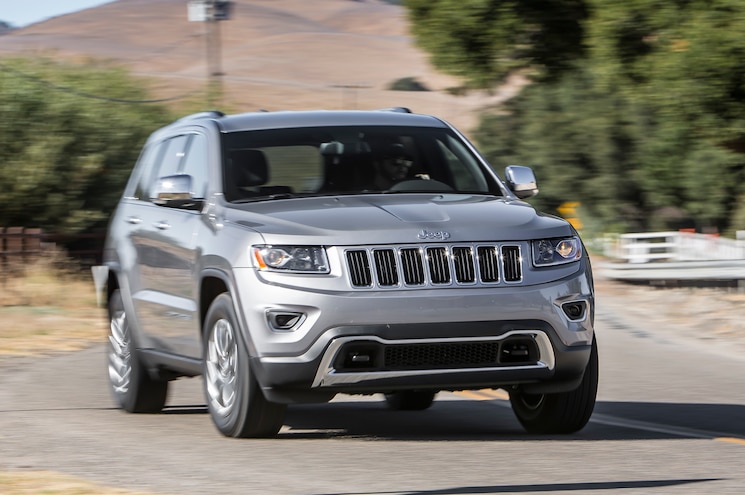 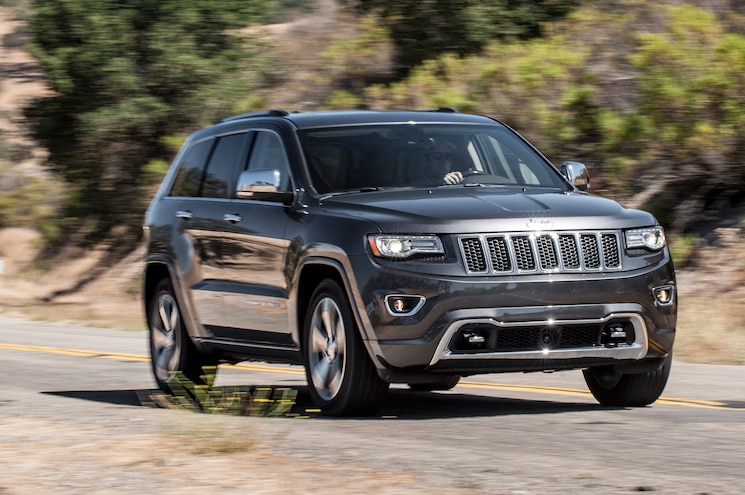 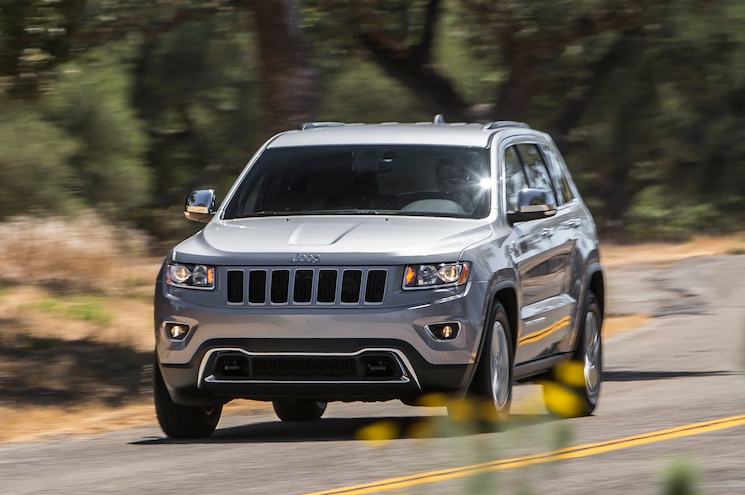