A Return to Rationality 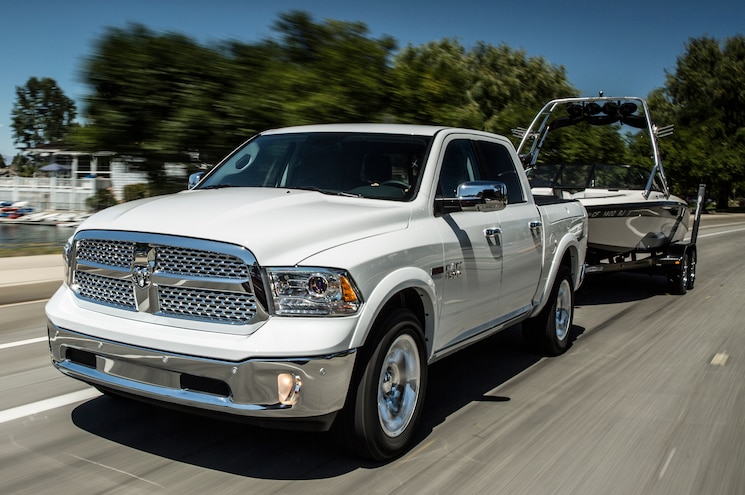 For the better part of the last decade, the focus on diesel powertrains in pickup-truck applications was primarily on ever-increasing capability. That has culminated today in HD trucks with 850 lb-ft of torque from the factory with a 30,000-lb towing capacity. Clearly, for all but the most dedicated heavy haulers, it was far more capability than most customers needed or wanted. Ram is looking to redefine how customers see diesels in pickups with the introduction of the 2014 Ram 1500 EcoDiesel.
But just because the brand is introducing a lighter-duty diesel in its truck line does not mean it's abandoning its commitment to the heavy-duty market. As mentioned in the introduction, Ram currently leads the HD class in maximum torque and towing capacity, and is committed to continuing to serve those loyal, function-focused customers, says Mike Cairns, Ram's chief engineer. He was present for a multi-day Ram event showcasing some of the brand's new models for media.
But Cairns said the overwhelming feedback the company received from light-duty customers was for greater fuel efficiency in a half-ton truck. Many in these groups mentioned the desire for a diesel engine option.
Cairns said he believes the appeal of the Ram EcoDiesel covers a broad range of potential customers, including those with boats, travel trailers, watercraft or other recreational items. Those customers want enough power to tow, but want good commuting fuel economy Monday through Friday. 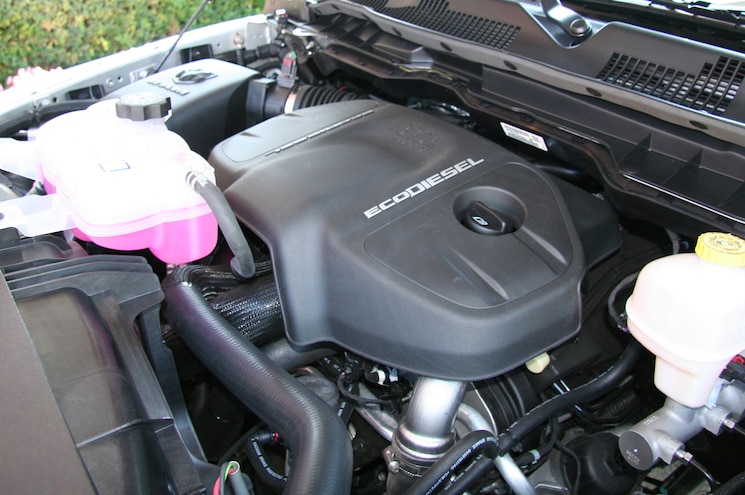 View Photo Gallery | 33 Photos
Photo 2/33   |   2014 Ram 1500 Ecodiesel Engine 1
Why Not Higher?
Eagle-eyed readers may note the maximum towing capacity of the Ram 1500 EcoDiesel is 9200 lb. On-paper, that's one ton less than the maximum rating for a Ford F-150 equipped with an EcoBoost V-6. Some buyers may see the capability gap as a weakness or shortcoming of the light-duty diesel drivetrain compared to the Ford. Cairns disagrees, saying that the line between light-duty and HD trucks has been blurred within the last few years. He blames that on competitors' marketing departments. "We do a lot of customer surveys and clinics. The light-duty (1500) customers are not asking for more payload or more towing. They consider all of the Detroit Three's half-tons essentially the same in terms of capability. The EcoDiesel will tow what a half-ton customer needs to tow. I've said consistently for years, if you have a 10,000-lb or bigger trailer, you should be getting an HD truck, it's a tool made for the job. I think the target customer will recognize what a half-ton truck is made for, which is a towing range of 5000-7000 lb."
Cairns says he sees potentially broad appeal for the new EcoDiesel. "I think there are two camps of customers we're going to draw to this new truck. I think we'll attract the traditional diesel guys, the guys that love the durability, capability and image that comes with a diesel, and have moved up to 2500 trucks, but might be better-served with a lighter-duty truck. We'll get those customers that want a diesel at a little lower price point than the HDs. I think we'll also draw customers that once owned a truck, and loved the utility of a truck, but moved away from the segment for fuel economy reasons. But they've never stopped wanting a full-size pickup truck. We'll get them back with a product that offers around the same fuel economy of what they went to, with all the utility of a truck. I think we'll get a lot of people back into the truck market," he said.
Behind The Wheel
With the context set for the marketing and targeting of the Ram EcoDiesel, what's the behind-the-wheel experience? For one, it's completely unique in the half-ton, or even the entire full-size truck market, for that matter. In the Ram 1500 line, the EcoDiesel has the lowest horsepower, but the highest torque output, at 420 lb-ft, of any of the engine options. Ram is estimating a 0-60 time of less than nine seconds, but did not get more specific. The power delivery of the 3.0-liter turbodiesel V-6 paired with the TorqueFlite 8 eight-speed automatic transmission is unlike that of either a gasoline turbo V-6, or a naturally-aspirated gasoline V-8. There is just a whiff of turbo lag off idle, but the engine quickly climbs to its torque peak, and we had no problem laying a few patches of rubber off-the-line with the EcoDiesel. 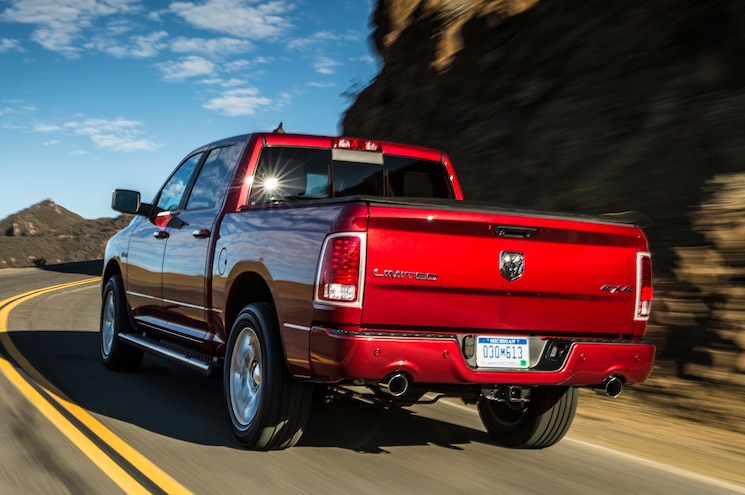 View Photo Gallery | 33 Photos
Photo 9/33   |   2014 Ram 1500 Limited EcoDiesel Rear View In Motion
With a modest (by today's standards) 240 peak horsepower, the EcoDiesel doesn't exactly plant you into the seat with scenery-blurring acceleration. The sensation is more that of consistent, linear, solid torque and acceleration. Loaded or unloaded, the EcoDiesel gets up to speed without drama, but frankly, without a lot of excitement, either.
Thanks to the inherent drivetrain isolation characteristics of a body-on-frame design, the EcoDiesel installed in the Ram is even quieter and more refined than its installation in the unibody Jeep Grand Cherokee. The engine is exceptionally quiet at idle, with just the faintest hint of the characteristic diesel clatter from inside the cabin. Under acceleration, the engine is a little more audible, but the predominant sound characteristic is more that of a six-cylinder engine than specifically that of a diesel. Getting on and off the throttle does occasionally elicit some whooshing and gasping sounds from the turbo, but nothing objectionable and untoward.
Cairns believes -- and we concur -- that the major selling point of the EcoDiesel will be fuel economy. On a hilly, winding driving route with plenty of elevation changes and tight turns, our test truck showed an indicated 20 mpg average, with two journalists driving in a not-particularly-frugal manner. We heard stories of other drivers getting as high as 24 or 26 mpg on the same route with a more deliberate emphasis on economy. Towing an approximately 4000-lb boat and trailer in a suburban setting with some significant inclines, we averaged an indicated 13.4 mpg.
Ram has not yet officially released fuel economy figures for the EcoDiesel, but we are confidently predicting 18/27 for the 4WD model and 19/28 for the 2WD model. Stay tuned to our 2014 Truck of the Year testing, where a Ram 1500 EcoDiesel is among the contenders.