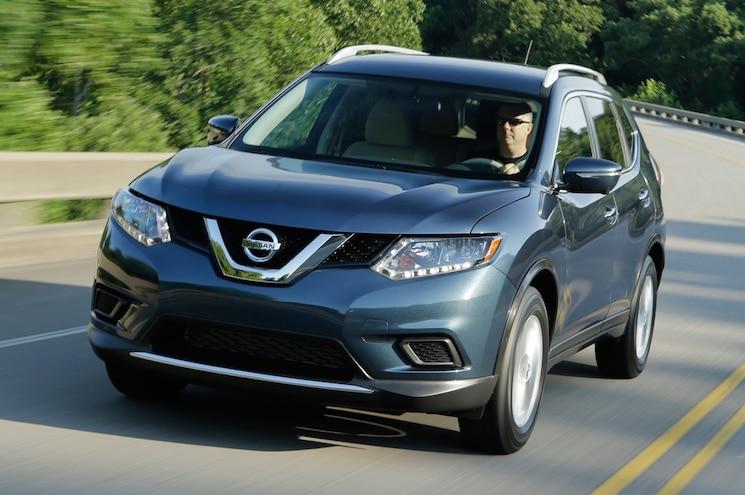 Some facts about the Nissan Rogue you might not know: The Rogue is Nissan's second-best-selling vehicle behind the Altima. Even in the outgoing model's final year of production, Rogue sales are up nearly 14 percent year-to-date. More than 647,800 Rogues have been sold in the U.S. since the model's introduction in late 2007, but that's still only good enough to place it fourth in segment sales behind the Honda CR-V, Ford Escape, and Toyota RAV-4. With Nissan predicting that CUV sales have plenty of room to grow, it figures there's plenty of ground to gain.
That's why Nissan isn't messing around with its second iteration of the Rogue. Not only will it be built in the U.S. (instead of Japan), alongside five other models at Nissan's Smyrna, Tennessee plant, it will also be built on an all-new chassis. The platform is based on the brand's Common Module Family (CMF) architecture that it shares with French partner Renault, and will ultimately underpin several models in various configurations globally. Available in front- or all-wheel-drive, the Rogue's single powertrain option is a 2.5-liter I-4 making 170-hp and 175-lb-ft mated to a CVT. Small changes to both engine and transmission, along with an improved drag coefficient, make the new Rogue roughly 15 percent more fuel-efficient than the outgoing model. 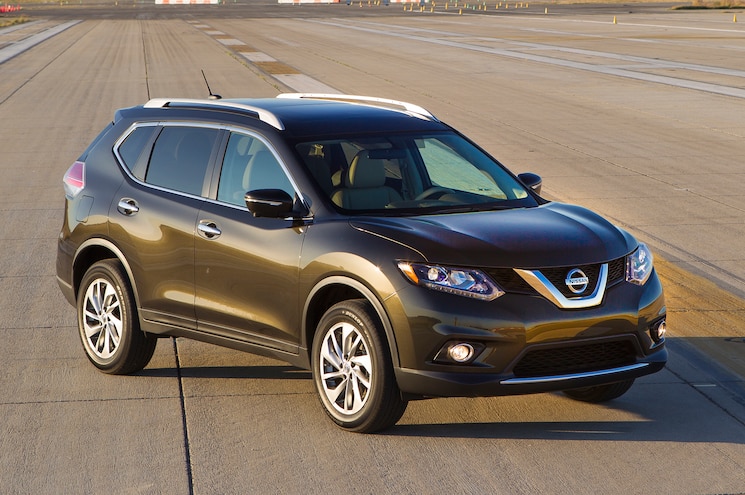 View Photo Gallery | 59 Photos
Photo 2/59   |   2014 Nissan Rogue Three Quarters Front View
Nissan tells us it put an emphasis on "premium" while developing the Rogue, making sure that it not only looks like an upscale vehicle, but also feels and drives like one. Aesthetically, the Rogue has become a lot more interesting, morphing from a fairly featureless blob of a crossover to something that shows some teeth. The styling is more aggressive, with bright trim around the windows, a distinctive-looking nose that hints at the new Nissan family face, and flared wheel arches that trade cute for sporty. LED headlights are optional, but 17-inch wheels are standard.
Inside, the 2014 Rogue is a long way from its relatively cheap-looking predecessor. More soft-touch materials are used on crucial touchpoints -- the door tops and armrests, for example -- and aluminum-look plastic trim is used around vents and the gear lever console to good effect. The instrument panel also looks nice, splitting the crisp-looking analog speedometer and tachometer with a small TFT multifunction display. Nissan says the front seats use the same NASA-developed design as the Altima to reduce fatigue. That sounds like a lot of marketing hype to me, but they are fairly comfortable. A 5-inch infotainment display is standard, while a 7-inch unit is included with the optional navigation system. A new NissanConnect smartphone app allows for additional features, including Pandora compatibility and voice texting. 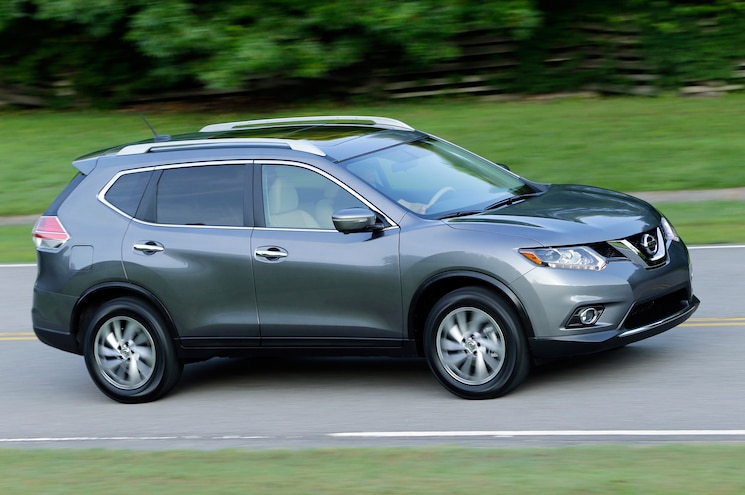 View Photo Gallery | 59 Photos
Photo 6/59   |   2014 Nissan Rogue Three Quarters In Motion Side View
The Rogue is available in both two- and three-row configurations, and while the second row is roomy enough for the average adult to not be miserable during the occasional around-town jaunt, the third row is strictly emergency use only, and even then, only for small children. The logic of offering third rows in compact vehicles such as the Rogue continues to defy me, but Nissan insists that many people are set on having that third row, even if it's rarely used. The second row also features a standard 40/20/40 split folding seat, so longer items (skis, fishing poles, a ladder, etc.) can be passed through the center of the row, allowing two people to sit astride. This configuration should be the new standard for split-folding rear seats, rather than the more common 60/40 setup.
More clever is Nissan's Divide-'N-Hide cargo system, which lives in the floor of the cargo area. The lid of the in-floor cargo hold is able to be positioned in several different ways to keep dirty or wet items separate from other gear or the carpeted floor itself. The lower storage area is easily cleanable plastic and large enough to stash a typical bag of potting soil, along with a few other odds and ends. It's a simple and well-thought-out system that appears to work well. 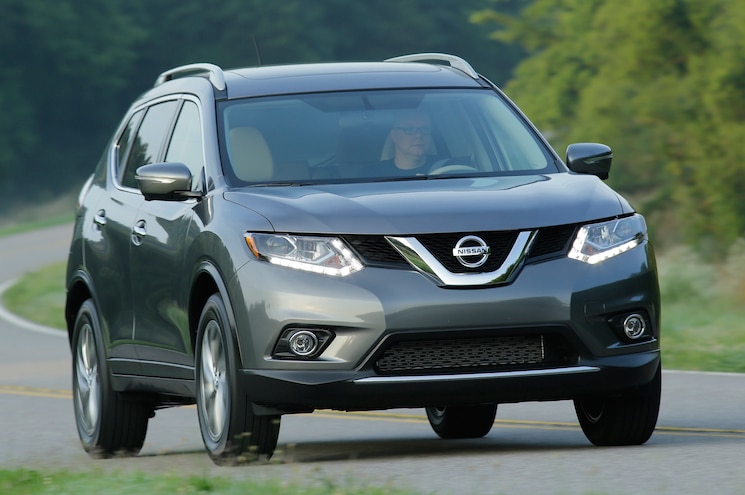 View Photo Gallery | 59 Photos
Photo 7/59   |   2014 Nissan Rogue Three Quarters In Motion Front View 002
The brief drive loop that Nissan put together departed from near Nissan's North American headquarters in Nashville and continued over country roads across the nearby valley. On these meandering roads, many aspects of the all-wheel-drive SV-trim Rogue felt relatively sporty -- the new electric steering is positive and has heft, and the suspension is tuned to the firm side of the spectrum, resulting in a trade-off situation. There's little body roll, but more transmission of potholes and larger imperfections to the cabin than some might prefer. Unfortunately, any delusion that this is a sports car disappears with a firm stab on the throttle. With max power coming in at 6000 rpm and max torque at 4400 rpm, the CVT keeps the engine droning away at high revs to make any sort of power. While the redesigned Xtronic transmission does attempt to simulate shifts at higher engine speeds, the end result is still a lot of noise and annoyance relative to perceived acceleration.
All that said, Nissan is hoping that the Rogue will make a strong value statement when it hits showrooms across the U.S. on November 13th. With a base price of $23,350 including destination fees for the entry-level front-wheel-drive, S-trim Rogue, Nissan claims that it will have the lowest price vehicle in its segment. All-wheel drive adds $1350 to the price and the base price of a top-flight, all-wheel-drive Rogue SL is $30,280 before options. The middle-range SV trim starts at $25,090 and according to Nissan will be the volume leader. For those who want an even cheaper CUV, Nissan plans to continue the 2013 Rogue into the next model year as the 2014 Rogue Select with a starting price expected to be a little less than $20,000 before destination fees. 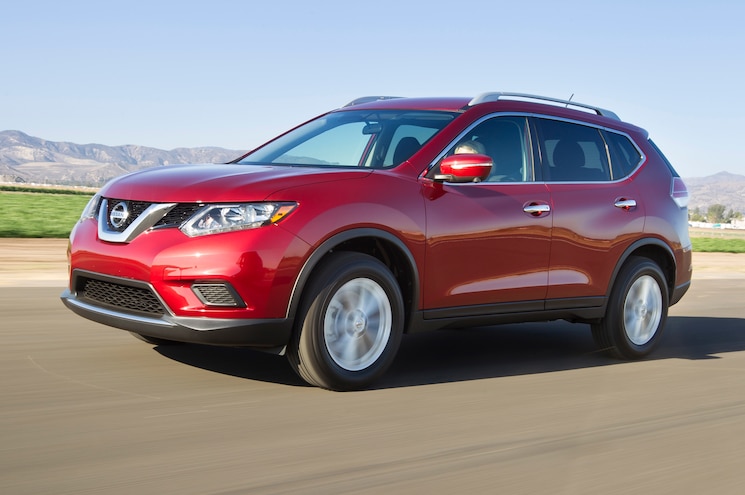