A Small Gamble: How One Automaker Might Revitalize an Entire Segment 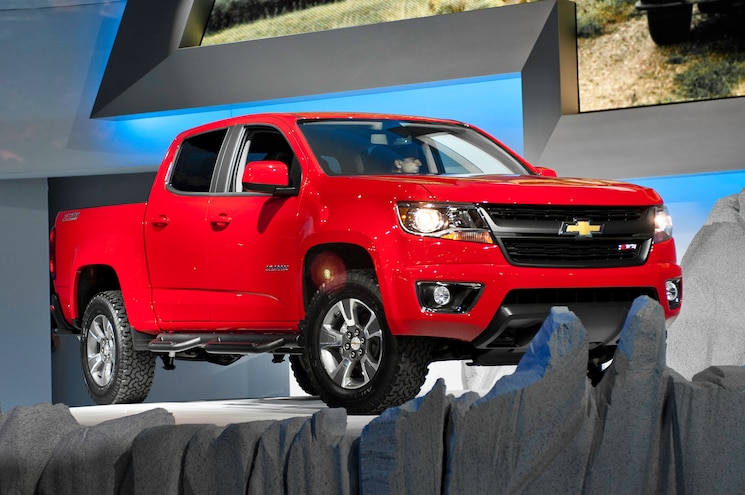 Auto Show Floor Update: The Chevrolet press conference made it crystal clear what the Colorado is going up against. A video showed the new Colorado passing a Nissan Frontier, then a Toyota Tacoma. Other visuals in the video were more telling: there was a shot of a ram (the animal) and a ranger (the person), and as the Colorado passed by, the forest ranger's hat was left in the truck's dust. It makes sense for Chevrolet to position the Colorado as a competitor for non-turbo V-6-powered full-size trucks, as was strongly implied in the press conference. - Allyson Harwood
We don't mean to put this much pressure on the 2015 Chevrolet Colorado, but when you haven't seen anything change in a segment for a decade, the first truck that breaks that deadlock is going to get a lot of attention. And that's exactly what]s happening. Few of the trucks in the compact/midsize category have changed significantly since around 2004, and while the pickups in that segment have gotten bigger (it's safe to say that the category is now firmly "midsize"), as of 2014, the number of trucks in it is down to just two. Remember when Ford, Dodge, Mazda, Mitsubishi, Hummer, Isuzu, and Suzuki made compact/midsize trucks? Yet some of these automakers offer global midsize trucks that we can't get here. It]s a very frustrating place to be for people who want a truck that's smaller than a 1/2-ton.
However, starting in fall 2014, things will be looking up for those buyers, as Chevrolet is bringing a highly revised version of its global Colorado to the United States and Canada. (There will be a GMC Canyon as well, but the manufacturer hasn't provided information on that truck yet.) While it did start out as the global Colorado, the engineers have made so many changes to it that it may actually be more accurate to look at this as a little Silverado in global Colorado skin than simply writing it off as a rebadged global truck. And it will be built in Wentzville, Missouri, where the Express and Savana are currently being built. 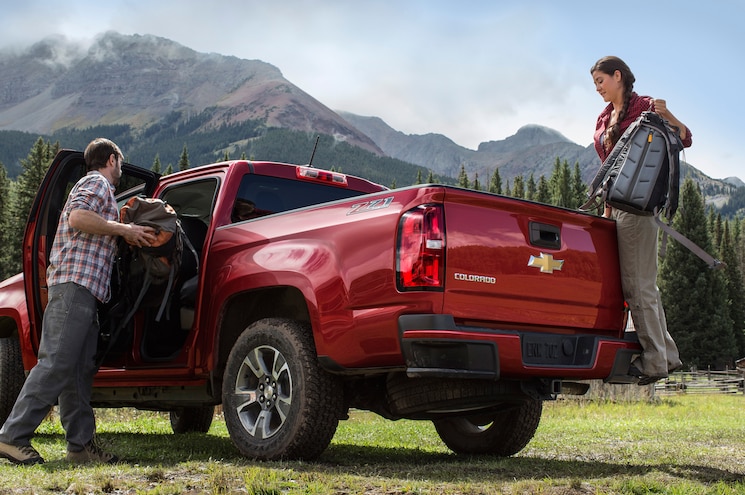 View Photo Gallery | 46 Photos
Photo 2/46   |   2015 Chevrolet Colorado Rear Three Quarters 03
The Colorado's new frame, which is fully boxed and uses a lot of high-strength steel, is about 40 percent lighter than the global frame, and shares relatively few components with it. The American Colorado is significantly longer than the global truck. There are three wheelbases for the new midsize, as there are three configurations: crew cab with a 5- or 6-foot bed, and extended cab with the 6-foot bed. The extended cab rides on the shortest wheelbase, 127.9 inches, which is exactly 6 inches longer than that of the global Colorado. The overall length of the longest American Colorado, the crew cab longbed, is 224.1 inches (on a 140.5-inch wheelbase), and the global model has an overall length of 210.5 inches. While this is much larger than the global truck, it is still significantly smaller than the Silverado. If you compare crew cabs, the Colorado is 5 inches narrower, 3 inches lower, and 16 inches shorter, and is 900 pounds lighter. Suspension duties are handled by coil-overs in front and dual-stage leaf springs in back. The new truck now uses Duralife four-wheel disc brakes (it had rear drums in 2012, its last model year) with ABS. As with the Silverado, the doors are inlaid and triple-sealed. Six airbags and a rearview camera will be standard, and forward collision alert will be available. We haven't received full specifications yet, but we do know the truck will have electric power steering and an impressive 41-foot turning radius. No, we did not mention a regular cab here as an option. That's because there isn't one. However, we've heard that those who want to can get an extended cab with a rear-seat delete option.
The trim levels will be WT, LT, and Z71, with RWD or 4WD. On other GM trucks, and in the past on the Colorado, the Z71 had been a suspension package available on a variety of trims. But something else that'll be new for 2015 is the introduction of the Z71 as a separate model, with unique spring and shock tuning, skidplates, and slightly different styling. Z71s will come with StabiliTrak, trailer sway control, hillstart assist, and hill descent control.
When the truck first goes on sale, buyers will have a choice of two engines—a 193-hp and 184-lb-ft (estimated) 2.5-liter I-4 or a 3.6-liter V-6, putting out an estimated 302 hp and 270 lb-ft. GM has used these engines in other models. The four has powered sedans, and the V-6 is similar to the engine in the Equinox, but GM says both engines have been retuned for truck applications, with more bottom-end torque. Both have direct injection and variable valve timing, and will be backed by a six-speed automatic with a floor-mounted shifter. That's right, there is no manual transmission for 2015, but Chevrolet is open to consumer input on this. If enough people want it, a manual could be made available. We expect that, even though the new truck is probably slightly heavier than the previous one, because of the more efficient engines, better aerodynamics, and use of active aero grille shutters, fuel economy will be greatly improved. We also expect acceleration to be quicker as well. 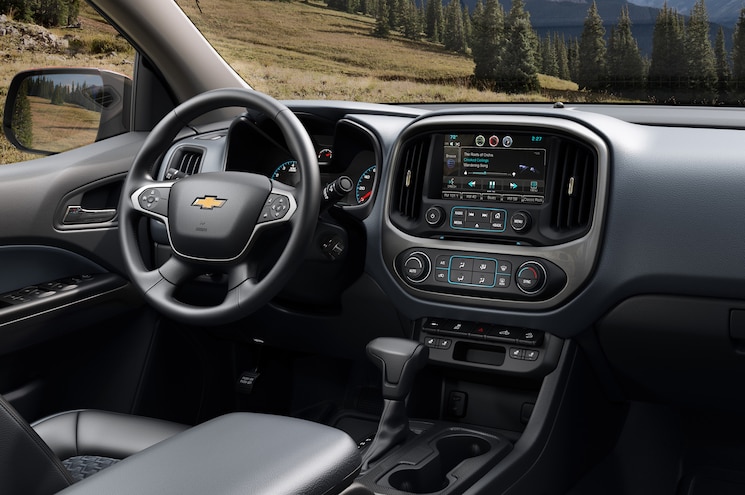 View Photo Gallery | 46 Photos
Photo 9/46   |   2015 Chevrolet Colorado Interior
There is other big news, and unfortunately we have to wait until the Colorado's second year to see it, but there will be a third engine added to the options list for the 2016 model year: a 2.8-liter Duramax I-4. Chevrolet hasn't announced power numbers yet, but in the global truck, it produces 197 hp and 369 lb-ft. While we expect that the diesel's hp and torque will be slightly lower here because it will use an aftertreatment system, the global engine's torque number is only slightly lower than that of GM's new EcoTec3 5.3-liter V-8, while potentially offering significantly better fuel economy. Even at 90 percent of that number, the torque would be stellar. The engineers at Chevrolet also told us that the American-market version of this engine will be much quieter than the global unit. The DEF's refill point will be behind the fuel door. Unless one of the other manufacturers pulls off a stunning upset in the next year, the Colorado will be the first midsize truck sold in the U.S. with a diesel engine. Remember when we thought that would be something Mahindra would do?
We got to sit in the cabin of the new Colorado, and materials, styling, and amenities are greatly improved from those in the previous Colorado. There is a driver information screen within the gauge cluster, an 8-inch color touch screen in the center stack (optional on the WT), plus OnStar, MyLink, and navigation will be offered. Seats will be stain-resistant cloth or leather.
But there's no denying the new midsize's appearance is much more global Colorado than it is little Silverado. Those hoping for a truck that looks like a scaled-down Silverado will be disappointed. However, there were some changes. The truck has a new front end and higher bedsides, and we feel these differences make it look better than the global truck.
Chevrolet has some lofty capability goals with this truck, but they are certainly things that are possible. The idea is that the Colorado will have best-in-class horsepower, payload, and towing capacity. GM hasn't announced payload capacity, but it expects a 6700-pound towing capacity at launch (and higher with the diesel). It will also be the first in its segment to offer a trailer brake controller. The company's CornerStep rear bumper and 13 tie-down locations are standard, and the EZ Lift-and-Lower tailgate and spray-in bedliner are options.
Even with all these impressive features and capability, investing in the midsize segment is a gamble. There aren't a lot of people buying midsize trucks compared with full-sizes. But a strong argument can be made that many folks stopped buying trucks because there haven't been improvements in a decade. The new Colorado could bring back buyers who gave up on midsize trucks. GM hasn't announced pricing yet, but this is a key factor for the Colorado's success. If the truck comes in at a price that's lower enough than the Silverado's, it should do well. Then there's the challenge of pricing the diesel option.
Still,the payoffs for this gamble could be huge. If GM is right that midsize trucks cater to a different buyer than full-size trucks do, and that there is a bigger market for smaller trucks than is being served at the moment, the Colorado could bring people back to this segment and could take market share away from the Tacoma. It could also mean buyers would be willing to pay more for a well-optioned Colorado than they would for an entry-level Silverado. Not everyone has the space to park a ½-ton truck nor the desire to drive one in the city . The gamble could also pay off for truck fans in more ways than one, if Ford and VW choose to respond by bring their Ranger T6 and Amarok to the U.S. No pressure, Chevy. 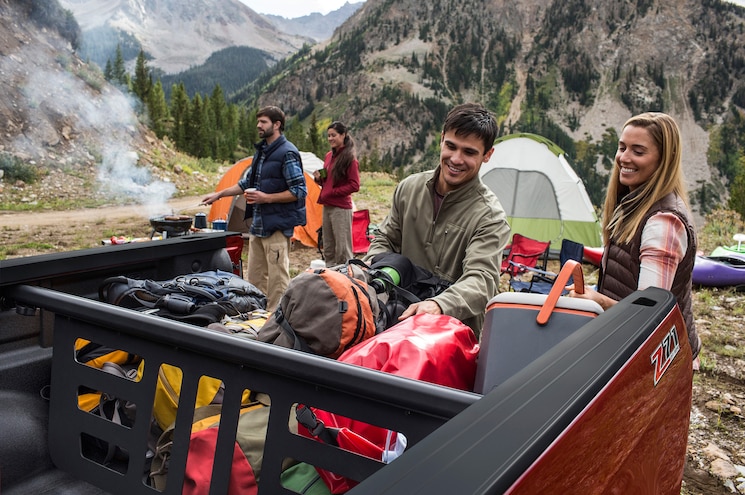 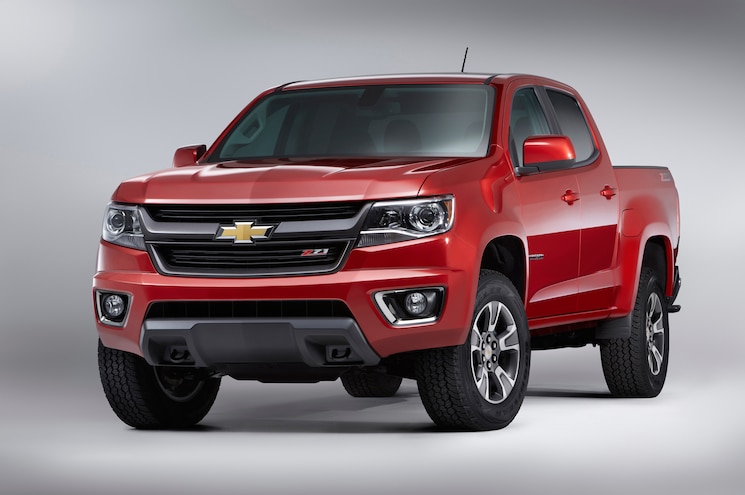