Behind the Wheel of an ICON Chevy Thriftmaster Pickup: Taking the Idea of the Resto-Mod a Step Further 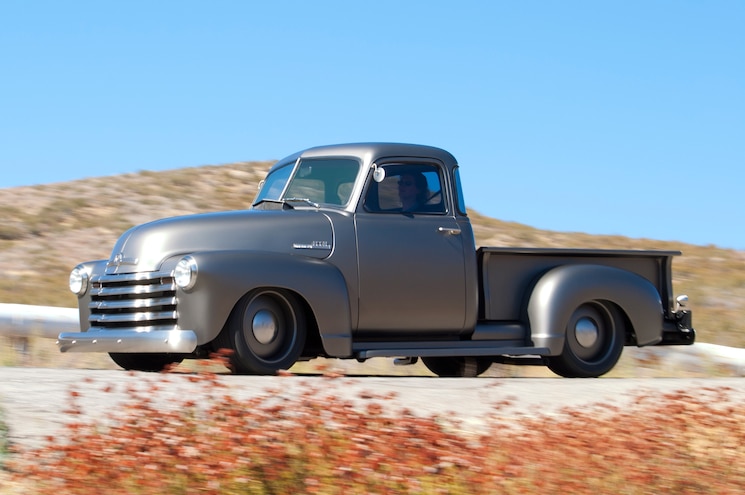 There are so many good things about driving a truck from the past. There are styling cues that modern-day fuel economy requirements and modern regulations won't allow. Things like bench seats, which still exist today but are starting to become scarce. Art-deco-inspired features in the cab. And there's that great smell when you get into an old truck, the smell that can't be replicated with the plastics and materials that are now used in vehicle interiors. But there are some not-so-good things about driving an old truck, the things that most people don't think about when they wax nostalgic about the pickup they always regret selling, the one that got away. It was really slow. The brakes weren't that good. It leaked oil like a sieve, and smoke billowed from the tailpipe. And there was that one bent spring in the bottom seat cushion that you have to watch out for. Ah, memories.
The resto-mod concept is a solution to that, the idea being that you can retain the original body, yet get a modern drivetrain. You could say that ICON is a company in the resto-mod business, but their vehicles are so much more than that. We recently got the chance to drive one of the company's Thriftmaster trucks, and we got a feel for how awesome ICON's vehicles are.
Make no mistake, even though this truck is based on the 1947-1953 Chevrolet 3100 Advance Design five-window truck, what you are looking at here is a custom, high-quality, small-volume bespoke vehicle. You choose the color, transmission, and whether you want the engine supercharged or naturally aspirated. 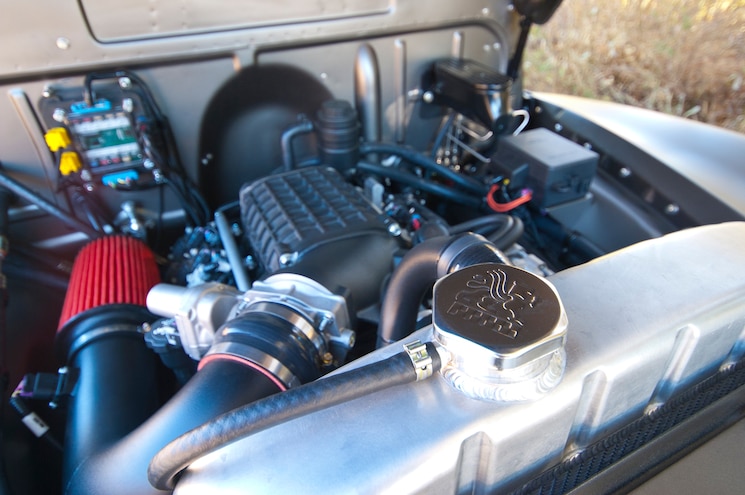 View Photo Gallery | 14 Photos
Photo 2/14   |   ICON Thriftmaster Chevrolet Pickup Engine
What we were first taken by, before even getting into the truck, was ICON's attention to detail. Every line, every accent was just right. While the pickup stands out from everything else on the road, it isn't over the top. It's classy, and you can tell that this wasn't just a case of dropping a crate motor into an old truck.
The body is a new licensed GM steel body, supplied by Real Steel. It uses new badges designed by ICON that remain true to the Art Deco era. Art Morrison created mandrel-bent mild steel rails, designed to create a rigid frame. (In fact, all the plumbing in the engine bay is also mandrel-bent.) They used jig tables that are chassis-specific, and the accessory mounts are precision laser-cut and formed. The truck uses a custom-built Currie 9-inch limited-slip rear end, with 31-spline Strange axles. ICON also had new driveshafts made, with 1310-series U-joints and high-strength steel shaft bodies. The suspension is new as well, with a triangulated four-link setup in the rear with Johnny Joints. In front, the independent suspension is tubular, TIG-welded, and there is an anti-roll bar. The truck uses JRE coilovers all the way around.
Replacing the original inline-six is a GM E-Rod LS3 V-8, which when naturally aspirated, puts out 315 hp and 335 lb-ft. When we looked under the hood, we saw that this one was not -- it uses a Magnuson TVS 1900 supercharger, which brings the power totals to 435 hp and 458 lb-ft. It has an internal bypass valve and an air-to-water intercooler. Cooling is taken care of with a high-density core alloy radiator and dual electric fans. Backing the LS3 is GM's 4L65E four-speed automatic. (A manual transmission is also available.) The exhaust uses TIG-welded headers, a mandrel-bent three-inch system that is computer controlled, and high-flow stainless-steel mufflers.
As we continued the walkaround, we saw other cool features. ICON put 18-inch Nittos on Circle Racing billet wheels, with the ICON name acid-etched into each wheel. The truck bed uses ash wood strips separated by stainless-steel runners. There are LED lights in the ends of the rolled bed rails, and instead of the tailgate being suspended with the use of chains, ICON created a new latch system. The bumpers are the originals, nickel-plated with clearcoat. 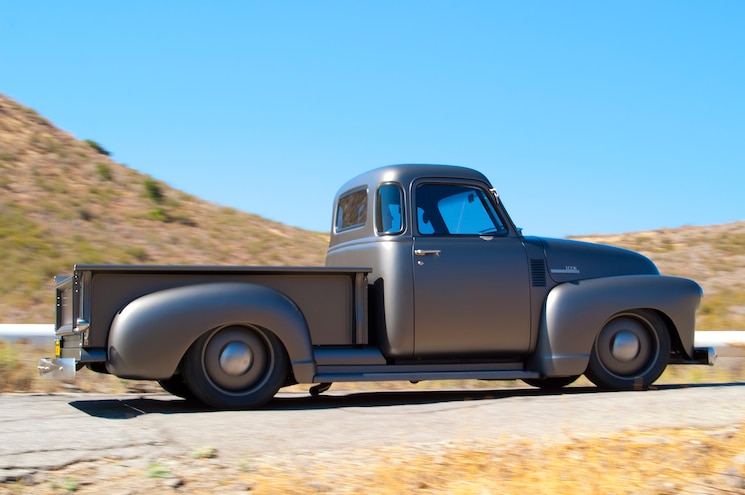 View Photo Gallery | 14 Photos
Photo 6/14   |   ICON Thriftmaster Chevrolet Pickup Rear View In Motion
It was time to get in. As was the case with the rest of the truck, the cab was completely redone as well. We slid into the regular cab, sitting on the bench seat covered in American bison leather. Carpeting is Rolls Royce Wilton wool, and there is plenty of Dynamat sound-deadening material. The steering wheel came from a 1955-1957 Bel Air, and its looks are a perfect fit. The aluminum dash looks stock, but hidden behind a sliding panel is a Kenwood double-DIN head unit, which gives the truck modern features like nav, Bluetooth, satellite radio, and wifi. There is also a full Audison digital audio system. The doors have what appear to be cranks for the windows, but they are actually controls for the power windows. All of these features were made possible once the ISIS Management System CAN-BUS wiring system was installed.
Starting the engine (with a key, thank you very much) causes a noticeable rumble, and it sounds decidedly modern. We used the column shifter to get in gear, and carefully exited the driveway to get on the road. We immediately noticed how fast the Thriftmaster is. The supercharged engine makes this truck incredibly quick, to the point where you could shock someone in the next lane over when the light turns green. Mike Febbo, associate editor at Motor Trend also had some time behind the wheel. He noted, "The weight feels down low and with a low moment of inertia. The truck feels like it would change directions pretty willingly, although I think the spool in the rear end is definitely slowing that down some." The rack-and-pinion steering was direct, and had none of the vagueness of an old truck's steering. Even though visibility was terrific, better than in most modern trucks, it was nice to have the use of the back-up camera that was part of the head unit. The brakes, four-wheel slotted and vented discs with ABS, took some pressure to operate, but were excellent. The suspension was on the stiff side, but works well.
The Thriftmaster is essentially art on wheels, a limited-edition sculpture that you can drive -- fast -- and really enjoy. Unlike regular art, this is tough and rugged, and is still above all, a truck. When the Thriftmaster goes on sale, there will initially be five Ultimate Thriftmasters, each one signed and numbered. Those will have a price of about $220,000-$250,000. We expect more Thriftmasters to follow, likely costing less than the initial five. But while the asking price is high, when you think about it, these are custom artworks. These are far beyond what the original Chevy truck was. To learn more about the Thriftmaster, visit ICON at http://icon4x4.com. 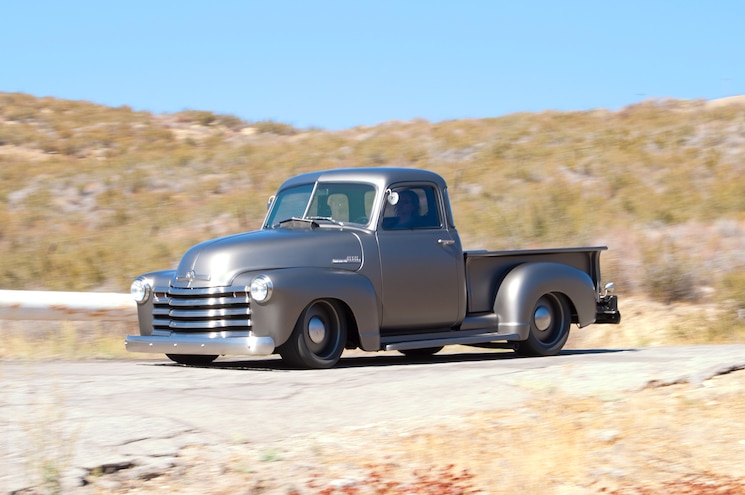 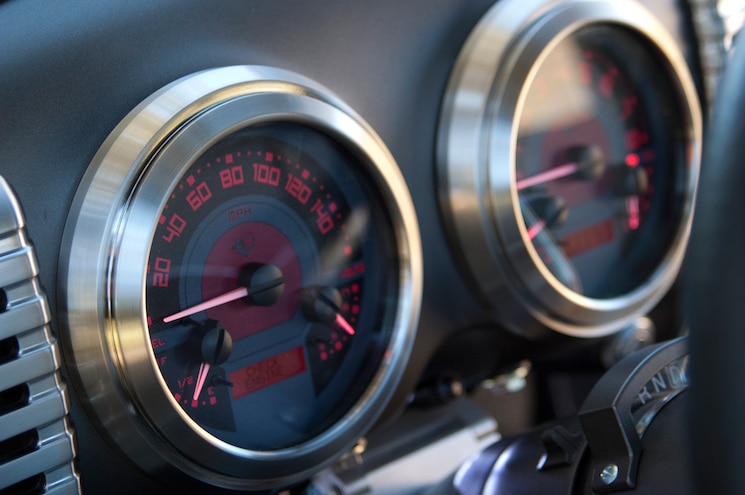