Still King of a Smaller Hill 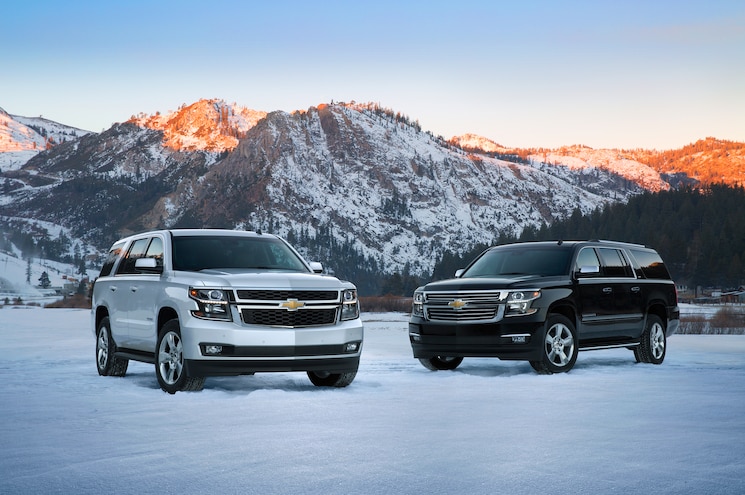 When you have a commanding combined 70-percent market share of a certain segment, it would make sense to continue investing in that niche and solidify your leadership. Although full-size SUVs are not exactly the same mega-volume models as they were 10-15 years ago, they're still an important profit center for General Motors, and with smaller crossovers filling the budget-conscious end of the SUV spectrum, the new GM full-size models, the 2015 Chevrolet Tahoe, Suburban, and GMC Yukon and Yukon XL have taken a decided step upscale, burnishing their "do anything" credentials, while ceding the less-profitable, but higher-volume segments to other models, like the Chevy Equinox and GMC Terrain.
With the introduction of all-new 1/2-ton trucks for the 2014 model year, the model cadence of the full-size SUVs was expected to follow shortly thereafter, and true to form, these new SUVs are starting to roll into dealerships as this is written. Like the pickups, the SUVs don't completely obliterate the established convention for these models, retaining naturally aspirated V-8 power, body-on-frame chassis, and a solid rear axle. But as has been the case with each successive generation of the GM full-size SUVs starting with the GMT400 models, the K2XX models differentiate themselves from the pickups just a bit more. 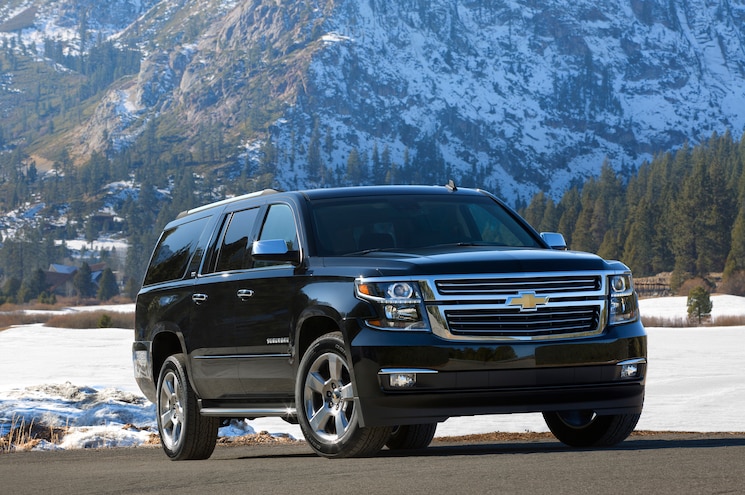 View Photo Gallery | 74 Photos
Photo 2/74   |   2015 Chevrolet Suburban Front Three Quarter
No Shared Sheetmetal
In the early days of the GM full-size SUVs, many panels and exterior pieces were essentially interchangeable with the pickups, including hoods, grilles, and front fenders. On the last-generation GMT900 models, only the front doors interchanged with the trucks, with the SUVs already having distinctive front clips. On the 2015 models, that percentage of shared exterior sheetmetal goes to zero. The SUVs finally get bespoke styling from bumper to bumper. All the K2XX SUVs, share a pronounced beltline that runs from front to rear and gives the SUVs an angular, sharp profile that at first glance appears less aerodynamic than its predecessors, but is in fact sleeker. One exterior item that contributes to these models' remarkable efficiency for their size is a perilously-low front air dam, even on 4x4 models. GM reps said it's easily removable with a screwdriver. If the farthest you ever venture off-road is a gravel driveway, there's probably no need to remove it, but if your definition of off-roading ever includes low-range, you might want to consider breaking out your toolbox.
Truck Capability, Car Comfort
As with the exterior, the interiors of the new SUVs continue to move away from the pickups. Whereas the new Silverado and Sierra have deliberately upright, boxy dashboards, the dashboard and console on the new SUVs is more curved and sloping, giving a very carlike feel from the driver's or front passenger's seat. Adding to the upscale feel is a power tilt-and-telescope steering wheel on LT and LTZ models of the Tahoe and Suburban, and available push-button start. Seats on the higher-level trims feature heating and cooling, and a large 8-inch MyLink (IntelliLink on GMC models) touchscreen. To keep the back-seat passengers young and old from getting too grouchy, second-row video, either from a flip-down video screen or available headrest-mounted screens let passengers fine-tune their entertainment options. Three-row long-wheelbase models (Suburban and Yukon XL) even have a third-row video monitor. 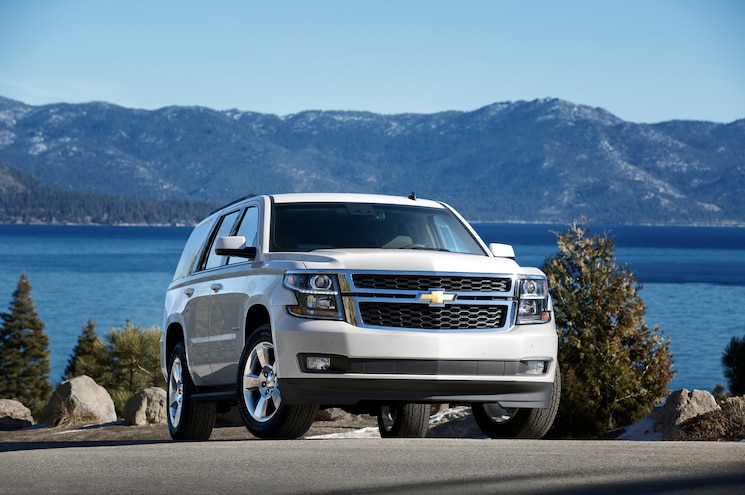 View Photo Gallery | 74 Photos
Photo 6/74   |   2015 Chevrolet Tahoe Front Three Quarter
Coming in the second half of calendar 2014 is available OnStar 4G, making the entire vehicle a rolling WiFi hotspot, allowing for non-stop fun and games on computers, tablets or other devices. But the interior experience of these vehicles can't be fully told without mentioning the remarkable refinement and noise isolation. Like the trucks, the new SUVs get a new inset door frame design, which allows for tighter sealing of the doors. On the Denali models equipped with the 6.2-liter engine, the vehicles also include Bose active noise cancellation. But fear not, the legendary small-block V-8 growl is still audible when you put the hammer down.
Engines: A Twist on Tradition
Although the 5.3-liter and 6.2-liter V-8 engines share their displacement with their predecessors, almost nothing else carries over from their predecessors, aside from traditional 4.4-inch bore spacing. The big news with these engines is direct fuel injection, which helps deliver both more power and more fuel efficiency. Horsepower is up 35 from last year's port-injected 5.3, and torque is up 43 lb-ft. Two-wheel-drive models of the 5.3 are rated at 16 mpg city and 23 mpg highway. The highway rating on 4x4 models drops 1 mpg to 22. 6.2-liter models get 15/21 ratings for 2WD and 14/21 for the 4x4. Economy ratings have not yet been released for the 2015 Ford Expedition with the 3.5-liter EcoBoost V-6, but are expected to mirror those of the 2014 F-150. GM is confident the 5.3-liter EcoTec3 engine will have an edge in both EPA and real-world economy over the refreshed Expedition and Navigator.
On the road, both V-8s deliver ample, confident power, although the advantage of the 6.2 over the 5.3 is immediately apparent, especially in higher elevations. The 5.3 doesn't feel so much underpowered compared with the 6.2, but has to work a little harder and rev a little higher to deliver the goods. Right now, the 6.2 is exclusive to the Denali trim level on the Yukon and will be the standard engine in the upcoming 2015 Escalade. When asked if there could be a future High Country trim level on the Tahoe and Suburban offering the 6.2, Chevy and GM reps simply said, "We're looking at many potential possibilities." In a less-official setting, one representative reminded us that the 6.2-liter engine was offered as a stand-alone option on the last-generation Tahoe and Suburban, and had a very low take rate. 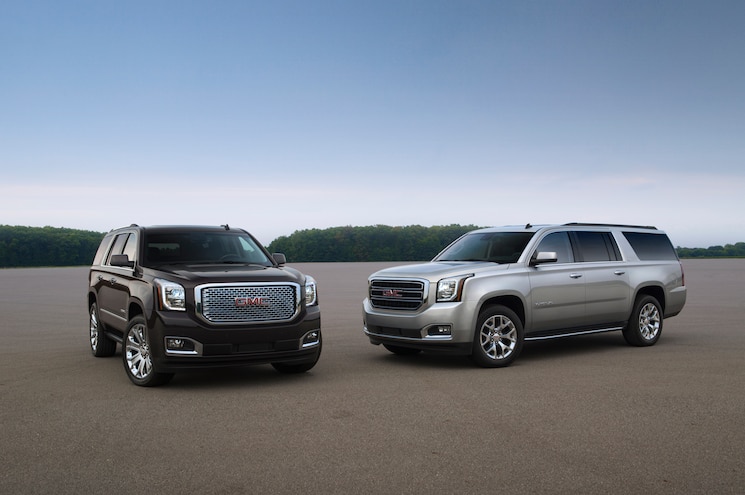 View Photo Gallery | 74 Photos
Photo 10/74   |   2015 GMC Yukon Denali GMC Yukon XL SLT Front Three Quarter
Still Relevant?
A few of the guests at the event quietly used the term "dinosaur" when they thought they were out of earshot of GM reps. While it's easy to dismiss these vehicles as outdated and irrelevant in today's efficiency-minded market, on closer examination, they sacrifice little in terms of economy to the smaller models in the lineup, while offering a substantial extra measure of utility. The 5.3-liter Tahoe only sacrifices 1 mpg city and highway to the Traverse crossover, and the 2WD Tahoe even matches the much-smaller Equinox V-6 AWD model for fuel economy. While the Traverse and Equinox will serve many families' needs fine, the overall utility threshold for both models is substantially lower than either the Tahoe or Suburban. Of course, their starting prices are also substantially lower as well. The starting price on the 2015 Tahoe is $45,595. Higher-trim levels of both the Suburban and Yukon XL can go well into the $70,000 realm with options, even approaching or surpassing the $80,000 mark with all the boxes checked. Although we've never really thought of the Tahoe, Suburban, and Yukon as "1-percent" vehicles, they're now solidly "10-percenters."
Proven Formula, Further Refined
There were plenty of questions from other journalists at the launch event about why GM decided to stick with a solid rear axle, and V-8 powertrains, when many of their competitors have gone to independent rear suspension and turbocharged V-6 engines. From our perspective, the competition has been chasing GM's dominance of the segment for over a decade with "unique" features such as IRS and alternative powertrains. Nobody has been able to substantially challenge GM's dominance of the segment, and buyers of these models tend to be some of the most loyal, and fundamentally want the same attributes as they always have, but better and more refined with each generation. The K2XX SUVs have accomplished that mission successfully, and will likely continue to be the dominant player in the segment. 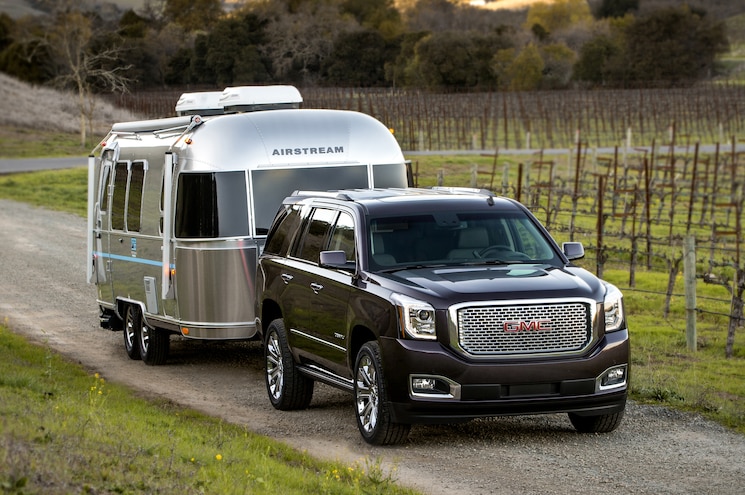 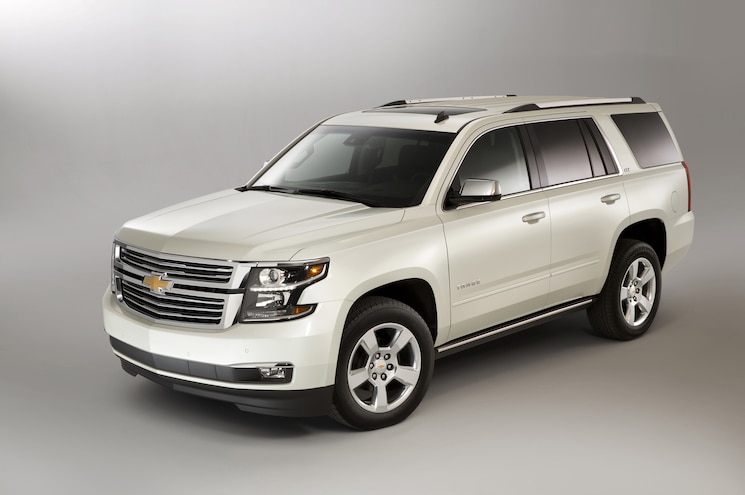