A Lot of Fun, a Little Practicality

Perhaps no other brand globally has as much legitimacy and history as a genuine SUV brand as Jeep. If you look at the family tree of almost any SUV on the planet, there's a good chance you can trace its ancestry back to the Willys MB, the ubiquitous, rugged workhorse that helped lead the Allied Forces to victory in World War II. Yes, even the Land Rover and Toyota Land Cruiser can trace their creation or inspiration to the MB. So what better way to honor the originator of the SUV genre with a special edition model? That's exactly what the brand did with the 2014 Jeep Wrangler Unlimited Willys Wheeler.
No other automaker has perfected the art of creating a multitude of compelling and desirable special-edition trims, often with few mechanical changes, as Chrysler. And true to form, the Willys Jeep shares the same 3.6-liter Pentastar V-6 and five-speed automatic (or six-speed manual) with other Wrangler and Wrangler Unlimited models. Visual differentiation from other run-of-Toledo models include gloss black front and rear bumpers, a black grille, and Willys block-letter decals on the hood, and a hilariously campy, but endearing "4-Wheel Drive" decal on the tailgate. 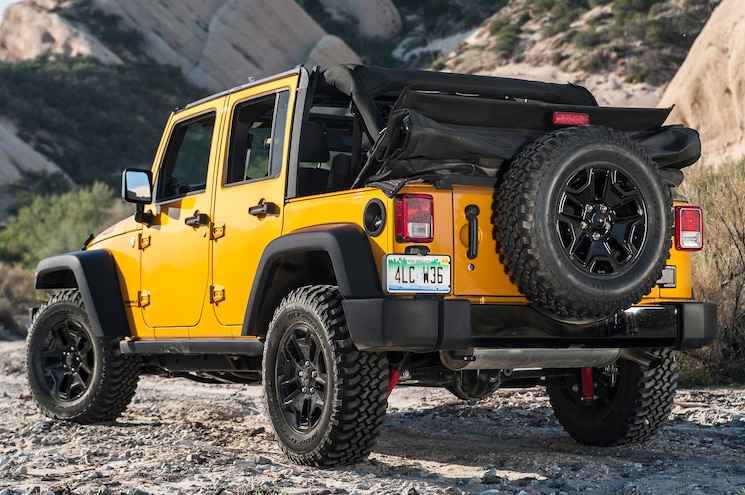 View Photo Gallery | 28 Photos
Photo 2/28   |   2014 Jeep Wrangler Unlimited Willys Wheeler Rear Three Quarters
Our tester was also painted in one of the new colors for 2014, Amp'd. If it looks familiar, it's because it debuted on the Altitude trim, right down to the gloss bumpers and black grille. But the Jeep Willys Wheeler package isn't entirely a decal special as it includes a Trac-Lock rear differential, Rock Rails, performance suspension, and a 3.73 axle ratio. Sorry, no winches, 4:1 low-range, or other goodies from the Rubicon.
So what you're left with is a decently equipped Jeep Wrangler Unlimited with a love-it-or-hate it paintjob and a soft top. We've ridden in multiple variations of the JK Wrangler, including two- and four-door versions with the wheezy 3.8 OHV minivan engine, as well as the Pentastar. There's no question in anyone's mind that the Pentastar is a massive improvement over its predecessor engine in every measurable or subjective way. But now that it's been out for more than two full model years, the novelty factor has worn off somewhat, as it's the staple engine in the Chrysler fleet for nearly everything from Ram 1500s to Chargers, Challengers, 200s, 300s, Grand Cherokees, and minivans. That in no way detracts from its goodness, and in fact, it’s a testament to its versatility.
As installed in the Wrangler Unlimited, it provides ample power, and can get the SUV up to speed briskly, with a respectable, but not neck-snapping, 7.8 second 0-60 run. In a soft-top Wrangler, the Pentastar probably has the least amount of sound deadening of any application, so the engine is always clearly audible, but never objectionable, and often drowned out by the significant wind noise inherent with a soft top. 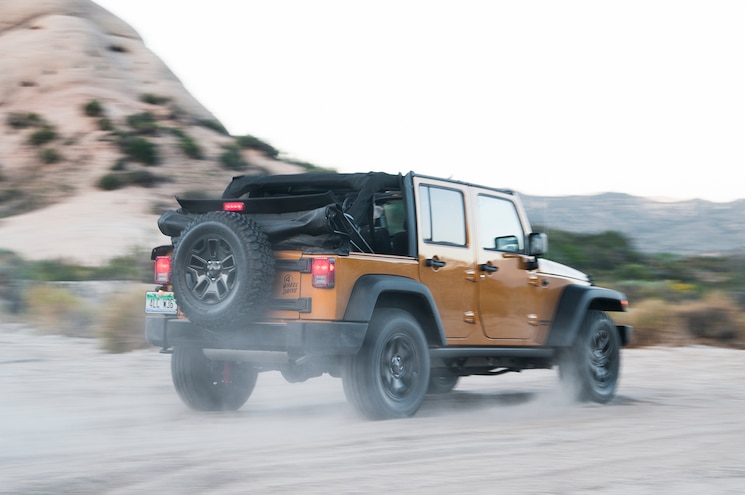 View Photo Gallery | 28 Photos
Photo 9/28   |   2014 Jeep Wrangler Unlimited Willys Wheeler Rear View In Motion
In terms of the power delivery itself, our only gripe is that the Pentastar sometimes feels a tad short on low-end torque, needing revs to feel truly energetic. The eight-speed automatic offered in the Ram, Grand Cherokee and the LX sedans does a good job of masking this deficit of twist, and we're sure it would have a similar effect on the Wrangler. There may be packaging reasons why the Wrangler has not yet received this transmission. We don't expect any major changes in powertrain options until the next-generation Wrangler debuts in 2017, at which point it will probably get the eight-speed, as well as an optional diesel, something long-rumored and highly-anticipated by Jeep enthusiasts.
One of the biggest advantages a diesel would bring to the Jeep Wrangler is fuel economy. The Pentastar brought an improvement in fuel consumption over the 3.8 OHV, but make no mistake, the Wrangler is still far from a fuel-miser. We observed a combined average of 15 mpg in mixed driving, well below the EPA figures of 17 city, 20 highway. We attribute that partially to the Wrangler's barn-door aerodynamics, with what's likely one of the most vertical windshields in the industry.
Depending on your lifestyle and neighborhood, the Wrangler might be your perfect vehicle. But if you live in an area where car break-ins are common, we'd strongly recommend the hard-top option. The Sunrider soft top can be easily unzipped from the exterior, practically inviting prying hands to explore its content. The Wrangler does offer a locking center-console storage bin, and accessory locking storage boxes are available through Mopar, but plan on removing anything of value if you park it for any period of time. 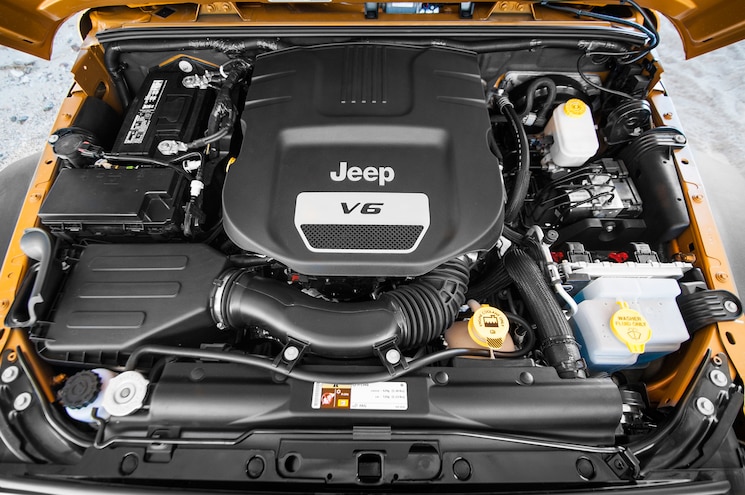 View Photo Gallery | 28 Photos
Photo 16/28   |   2014 Jeep Wrangler Unlimited Willys Wheeler Engine View
On-road handling and manners are nothing spectacular, and unsurprisingly, the Willys always had a floaty, disconnected feeling on pavement, vaguely responding to steering inputs. Its indifference to on-road performance is reflected in a thoroughly mediocre 0.63 g performance on the skidpad. A 60-0 braking distance of 132 feet is respectable, but not spectacular. Once you get off the beaten, paved path, and the trail gets rugged, the Wrangler feels unstoppable. Whether you're talking sand, dirt, mud, or rocks, the Wrangler relishes rough terrain and enthusiastically digs in and pulls through. If most of your recreational activities include off-roading, the Wrangler is undoubtedly one of the top choices.
Our vehicle's as-tested sticker of $34,880 seems reasonable for the baked-in capability and reasonable equipment level. But if you just want a basic Wrangler Unlimited Sport 4x4, you're looking at $27,190. The Wrangler, in Willys Wheeler, or any guise, for that matter, remains what it is, and what it always has been: The most basic, authentic, purpose-built off-roader you can buy new. If that singular focus appeals to you or meets your needs, then the Wrangler is unquestionably one of the best choices. But, if off-roading is just an occasional pursuit that punctuates a quotidian routine of long commutes, outside parking and family shuttling, there are better choices available, including from within the Jeep family.
Although more expensive, the Grand Cherokee does a much better job of balancing everyday on-road practicality with recreational off-road capability, and even the new Cherokee has proven to be surprisingly capable off-road while being fully competitive as an economical daily driver. But if you want the original, utilitarian, no-nonsense sport-utility experience, there's no better example on sale today than the Wrangler. 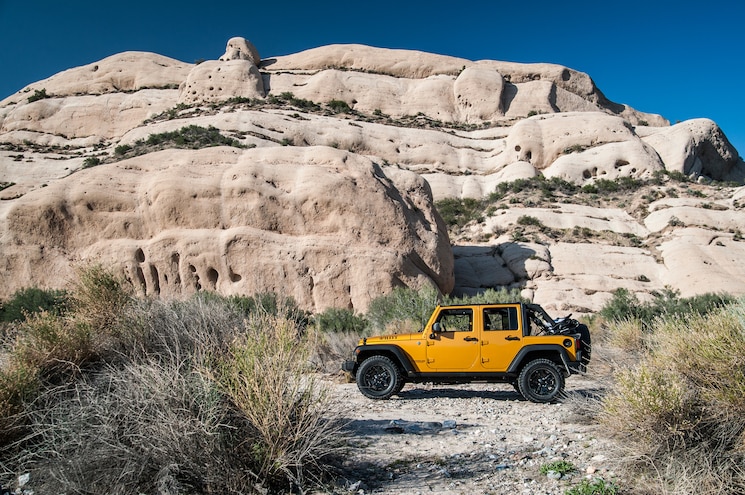